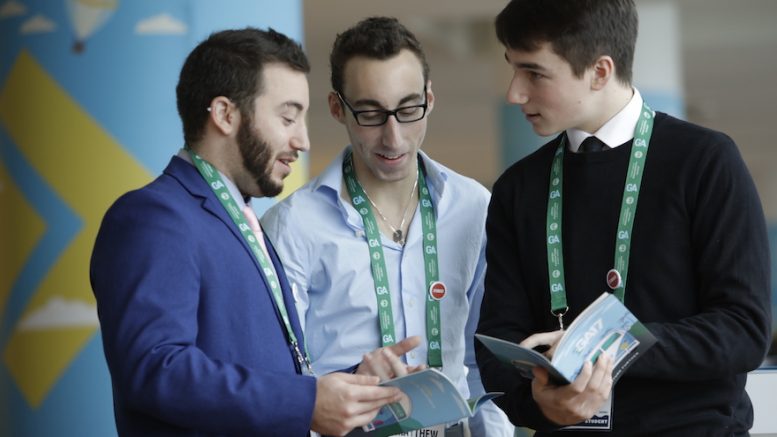 LOS ANGELES (JTA) — Leaders of North America’s Jewish federation movement kicked off their annual conference here Sunday with a tribute to the 1987 march on Washington that brought out hundreds of thousands of people in support of Soviet Jews.

The film and testimonials by refuseniks were moving, but felt a little like those perennial tributes by the New York Mets to their 1986 championship team: a reminder not only of what was, but what’s gone.

The rescue of Soviet Jews and their resettlement here and in Israel was a high point for the network of Jewish philanthropies and advocacy groups represented by the Jewish Federations of North America, whose annual General Assembly was to conclude Tuesday afternoon.

As Mark Wilf, chair of the JFNA’s National Holocaust Survivor Initiative, said in introducing the 30th anniversary tribute, it represented “what we can accomplish when we unite.”

But its very success posed a dilemma to the Jewish fundraising class: In the three decades since, organized Jewry has looked, often in vain, for a similarly galvanizing cause around which to rally. With the resettlement of the Soviet and Ethiopian Jews, there are almost no imperiled Jewish communities left to rescue. And Israel has been no help: As it has grown more prosperous, and more politically divisive among American Jews, the urgency of uniting around her, outside of wartime, has waned. A system built on fear, rescue and crisis needs a new organizing principle.

Throughout this year’s G.A., there were reminders of what the network of 148 local federations can do when they act in concert. The movement raised and delivered $15 million for victims of Hurricane Harvey in Houston in days. Speaker after speaker noted the movement’s support for such high-profile efforts as Birthright Israel (free trips to Israel for young people); Masa (long-term experiences in Israel for the same cohort); Moishe House (group living for, you guessed it, young people); and PJ Library (free Jewish books for families with young children).

But even as they touted these successes, and a string of relatively healthy fundraising years, a note of anxiety crept into the proceedings. There were small-group “breakout” sessions on differentiating the umbrella philanthropies like federation in a crowded Jewish charitable marketplace and turning elusive millennials into philanthropists. And the speakers’ repeated emphasis on “unity” and the “power of the collective” suggested that both were, if not slipping away, then under siege.

JFNA CEO Jerry Silverman was blunt in describing the challenges in his address Sunday.

“You see, it is not that there is no longer the desire and need for community,” he said to the 3,000 delegates gathered at the JW Marriott Hotel in downtown Los Angeles. “It is how people define community — or how people choose to engage — that has changed.”

Silverman described a number of areas around which a diverse community could rally: lowering the enormous cost of Jewish day school education; helping the less fortunate; engaging young people; and, as he put it, meeting the “unfulfilled promise of Israel being the home for all Jews — regardless of religious affiliation.”

It was this last point — discussed under the rubric of “pluralism in Israel” — that seemed to dominate this G.A., or at least the public discussions. It proved an inspiring rallying cry and sure applause line.

But it is also an issue that the federation movement wishes would go away.

In a nutshell, America’s non-Orthodox Jewish majority wants Israel to be a more welcoming place for Reform, Conservative and other non-Orthodox Jewish expressions. On Monday morning, the JFNA board issued an unusual resolution criticizing Israel for freezing a deal on non-Orthodox prayer at the Western Wall and for its support for a bill that would give Orthodox authorities in Israel a monopoly on religious conversions to Judaism.

Both issues demonstrate to the non-Orthodox establishment that their rabbis and religious practices — strongly connected to egalitarian religious roles for women and men — have second-class standing in the Jewish state.

But federations are set up to support Israel and inspire donors with its vision as a home for all Jews, not tussle with its leadership. The official program for the convention described what it called “one of the most vexing issues facing Federations today: How do we balance Federations’ philanthropic mission with our role as the community’s central address when we’re increasingly drawn into controversial political issues?”

Pluralism isn’t the only such issue — a panel discussion Monday sought to heal internal communal wounds over the bruising Iran nuclear deal fight of a few years back. But it’s an issue that not only creates antagonism between the Diaspora and Jerusalem (in his address Monday, Israeli President Reuven Rivlin implored the delegates to have patience with Israel’s messy democracy, which gives religious parties an outsized say in religion and state issues) but one that divides Jews here as well: Orthodox Jews are far less likely to care about the issue, and have made that known.

Federations are much more comfortable, and unifying, when they stick to what they do best: Richard Sandler, chair of the JFNA board of trustees, described that threefold mission as relief for the needy, support for Jewish education and identity, and inspiring a connection to Israel.

You could sense the release when the public sessions turned to inspiration, not division. Delegates were wowed by a “millennial roundtable” featuring three young social entrepreneurs who served up advice on how to reach their generation.

“If you want to engage millennials,” said Rachel Samekh, founder and CEO of Swipe Away Hunger, “you have to be curious about who we are.”

There was ecstatic applause for Mohammed Al Samawi, a Muslim advocate for interfaith relations who escaped the civil war in his native Yemen with the help of three young Jewish people he met online.

The convention was roused by a little old-time religion from Rabbi David Wolpe of this city’s Sinai Temple, who warned that too many Jews are “strangers and immigrants to our own tradition. We don’t teach our children what made our people our people.”

But it was another Los Angeles rabbi who captured the hope and anxiety of this year’s G.A.

If nothing else, this year’s G.A. was a search for that new language.

Be the first to comment on "op/ed: Jewish Federations rally around pluralism — but wish they didn’t have to"