Hanukkah, the Jewish holiday known as the Festival of Lights, is being celebrated on new stamp by Canada Post.

The stamp, which will be issued on Nov. 14, depicts a stylized Hanukkah menorah in different shades of blue with a golden Star of David at its centre. The forthcoming issue will be available in booklets of 10 Permanent stamps. Measuring 28 mm by 35 mm, the stamp was designed by Angela Carter, of Toronto’s Entro Communications. As with all 2017 stamp issues, the Hanukkah stamp includes a reference to the sesquicentennial of Canadian Confederation: printed in microtype along the right side are the words “Canada 150.”

Hanukkah has been celebrated in Canada for more than 250 years, since 1760, when the first Jews were allowed to immigrate. 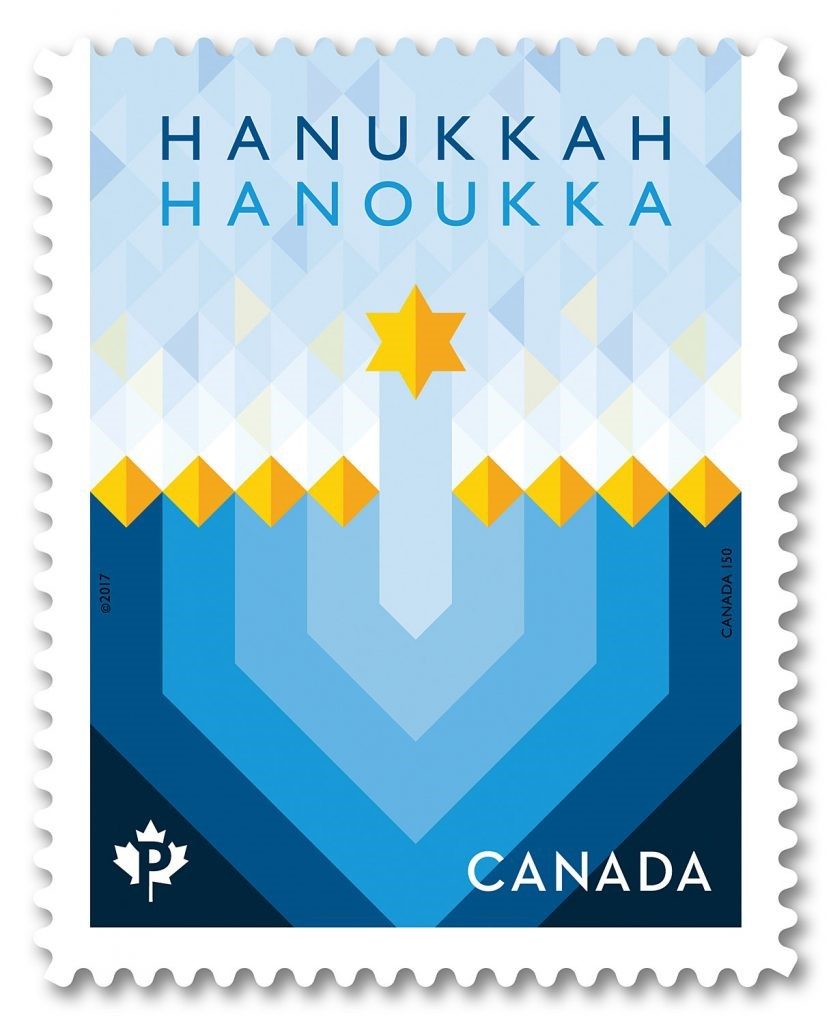 An official first-day cover (OFDC) will also be cancelled in Montréal, Qué. with a Star of David pictorial cancellation. The colourful envelope, which measures 190 mm by 112 mm, is affixed with one of the Hanukkah stamps. A total of 12,000 OFDCs will be produced.

A total of 350 framed prints are also available and feature an enlarged version of the Hanukkah stamp alongside an open stamp booklet.

In September 2017, Canada Post and India Post joined hands to issue stamps that celebrate Diwali, the Festival of Lights, an important annual observance for many Hindus, Sikhs, Buddhists and Jains in Canada and around the world. The joint stamp issue is a historic first between these postal services and reflects our country’s diversity in the year of Canada 150.

The stamps were unveiled at Toronto City Hall by Canada Post President and CEO Deepak Chopra; His Excellency, Mr. Vikas Swarup, the High Commissioner of India to Canada; and His Worship John Tory, Mayor of Toronto. 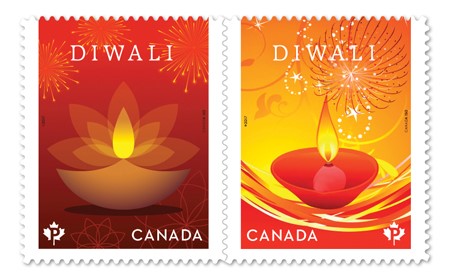 “The Diwali stamps express our pride in Canada being a land of diverse faiths, customs and celebrations,” says Mr. Deepak Chopra. “It is fitting that this historic first joint issue celebrates the strong relationship between Canada and India.”

Two domestic-rate stamps are now available in Canada. A stamp with a red background is the Canadian design, while one with a gold background was designed by India Post. The souvenir sheet has a Canadian international rate stamp and an Indian stamp.

Diwali, a five-day celebration, begins on the 15th day of Kartika in the Hindu calendar. Its main theme is the triumph of light over darkness. The celebration traditionally includes fireworks. In Canada, people often light candles in their homes, while in India, they light small clay lamps filled with oil; illumination is believed to ward off evil and attract happiness and good fortune. Believers also display colourful geometric rangoli patterns to decorate entrances. Families and friends also share sweets and gifts with one another and with those in need. 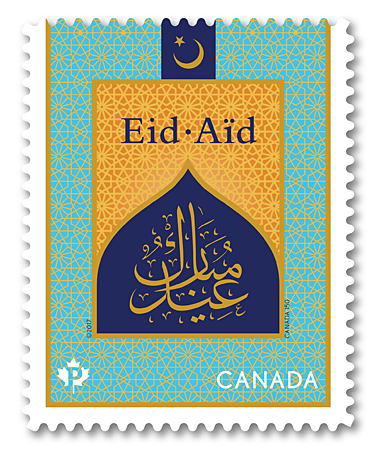 Designed by Gerald Querubin of Entro Communications and India Post, and printed by Lowe-Martin, the Permanent domestic-rate stamps measure 30 mm by 35 mm. They are printed in five colours plus a varnish, and are available in booklets of 10. The Official First Day Cover is cancelled in Toronto, ON.

The Diwali stamps and the Hanukkah stamp are among several that reflect Canada’s religious diversity 150 years after Confederation. They include Canada Post’s annual Christmas stamps with a Christian image and another with a secular holiday theme. In May, CPC issued an Eid stamp that recognized Eid al-Fitr and Eid al-Adha, two important festivals for Canada’s more than one million Muslims and those worldwide.