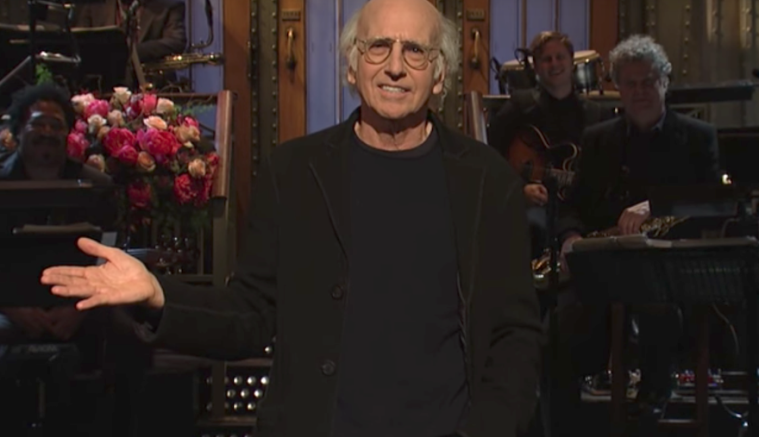 Larry David presents his opening monologue on “Saturday Night Live” including bits on the Holocaust and the high-profile Jews being accused of sexual harassment, Nov. 4, 2017. (Screenshot from YouTube)

NEW YORK (JTA) — In a famous episode of “Seinfeld,” Jerry is upset that his dentist, a recent convert to Judaism, is already telling Jewish jokes. He complains to the dentist’s former priest.

“I wanted to talk to you about Dr. Whatley,” Jerry says. “I have a suspicion that he’s converted to Judaism just for the jokes.”

“And this offends you as a Jewish person,” the priest says.

Larry David, the co-creator of “Seinfeld,” did a Holocaust bit on “Saturday Night Live” over the weekend, and a lot more Jewish persons than comedians were offended. In his opening monologue, David wonders if, as a prisoner in a concentration camp, he would have have continued to hit on women.

“I think I would!” David says, and then imagines the dialogue with a woman in the neighboring barracks.

“How’s it going? They treating you OK?” he asks. “You know if we ever get out of here, I’d love to take you out for some latkes. You like latkes? What? What did I say? Is it me, or is it the whole thing? It’s because I’m bald, isn’t it?”

The “SNL” audience was … polite. Twitter less so. The Anti-Defamation League’s chief executive, Jonathan Greenblatt, summed up the disapproval: “He managed to be offensive, insensitive and unfunny all at same time. Quite a feat.”

Every audience member has every right to decide what is or isn’t offensive. And there is perhaps no subject that can’t be joked about. But it is always a question of intent. A Labour Party veteran in England is being ridiculed there for telling an old Holocaust joke; she was trying, she said, to give an example of a truly offensive joke. And she was right about the joke anyway —  it’s obscene because it mocks Hitler’s Jewish victims and takes delight in their suffering.

Normally I’d say that’s the test of whether a Holocaust joke should be told: Who’s the butt of the joke? Both Ricky Gervais and Sarah Silverman have told jokes in which the teller seems to minimize the horrors of the Holocaust. But the audience is meant to laugh at, not with, the comic personas they have created. You are meant to understand that Gervais and Silverman are stand-ins for the self-confident morons who like to share their opinions about things they don’t understand.

On those grounds, David’s joke was fair game. The “SNL” joke wasn’t “about” the Holocaust at all — it was a joke about the male libido, as personified by the “Larry David” persona: glib, self-involved, wildly inappropriate. “Larry David” is the butt of the joke, so lustful that he can’t turn it off in a death camp.

The comedian Judy Gold tells a similar — and to my mind, much better — joke: “If I was standing on line naked for the gas chambers … would I hold my stomach in?”

That’s a one-liner about women’s vanity, not the Shoah. And it succeeds where David’s fails because it is better constructed and, well, shorter: She makes her point, lets gasps turn into uncomfortable laughs, and she moves on. But David lingers on the conceit and makes you picture the scene — the barracks, the other victim, the shaved heads. The comic idea collapses under the weight of the images he is drawing.

David has used the Holocaust as punchline much more effectively — and humorously — in the past. There was the “Seinfeld” episode where Jerry is caught making out with a date during “Schindler’s List.” In David’s follow-up series, “Curb Your Enthusiasm,” a Holocaust survivor gets into a debate about suffering with a contestant on the reality show “Survivor.”

Those bits succeeded where the “SNL” one failed because they were about something, or at least something more interesting than sex. The “Seinfeld” episode was puncturing pieties about Spielberg’s film and reminding viewers, through black humor, that there is a difference between a Hollywood movie and the actual experience of the Holocaust.

The “Curb” segment had a similar thrust: The faux suffering on “Survivor,” it suggested, had inured us to actual suffering and debased the notion of what it means to be a “survivor.” Both of these bits were about the Holocaust and how it is talked about.

Perhaps David could have pulled off his Holocaust pick-up routine in a club, where audiences are ready for raunch and edge. The present-day “SNL” may  feel more politically relevant than it has in a long time, but it hasn’t felt particularly edgy for years. An occasional host — Louis C.K. and Dave Chappelle come to mind — may come along to shake things up, but the humor, even the political satire, tends to be safe, even tame. Perhaps David deserves kudos for squirting a little bile into the bathwater, but a Holocaust joke — especially a lame one — seemed bound to spoil the party.

I’d also argue that the Holocaust joke wasn’t even his edgiest Jewish joke of the night. That would be the one about Harvey Weinstein in which noted a “very, very disturbing pattern” among the high-profile figures being accused of sexual harassment and assault: “Many of them are Jews.”

“And I have three words to say to that: Oy vey iz meer. I don’t like it when Jews are in the news for notorious reasons,” David continues. “What I want: Einstein discovers the theory of relativity, Salk discovers a cure for polio. What I don’t want: Weinstein took it out.”

I guess that’s an admirable assertion of Jewish pride. In the face of a lot of bad “Jewish” headlines that might in another era have led to anti-Semitic grumblings, David reminds us about the good Jews out there. But the idea that there is something “Jewish” about the wave of sex scandals has been the stuff of neo-Nazi websites (and the rare Jewish “think” piece), not the mainstream discussion. Well, not anymore. Thanks, Lar!

What may be most interesting about David’s monologue is how completely he embraces his Jewishness — as a comedian, that is. “Seinfeld” was a show by Jews, but not necessarily for or about them. David’s “Curb” character is conflicted, to say the least, about his Jewishness. But taking to live TV on a major comedy stage, David fully embodied the character of the Jew by broaching the two hot buttons of defensive Jewish identity: the Holocaust and anti-Semitism.

Which leads us back to Jerry and Dr. Whatley in that you see the seeds of David’s defense, if he were to offer one, of his “SNL” performance: “Jews have earned the right to tell Jewish jokes. Our DNA, our culture, our history give us a pass, even when it comes to ridiculing one another or milking our sacred cows.”

That’s absolutely true. But that doesn’t mean you can’t be offended as a comedian.

Be the first to comment on "Op/ Ed: Larry David’s Holocaust joke was an offense — against comedy"