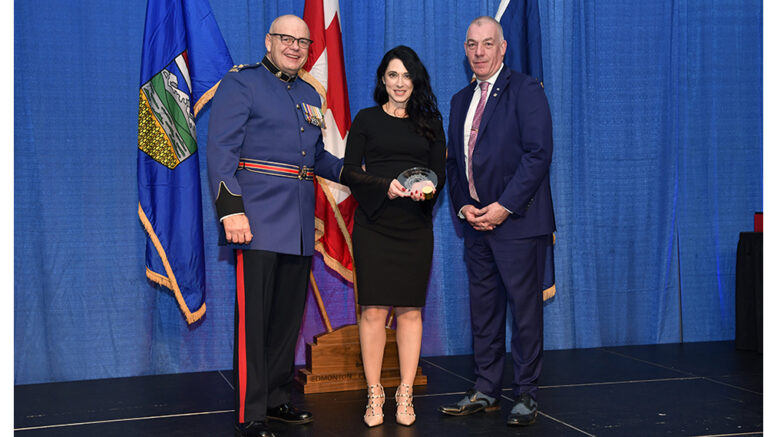 (AJNews) – On September 25, 2021, when Olga Muradov, an active member of the Edmonton Jewish community, dropped her two sons off at the park for extra-curricular sports training, she could not have known that before the day’s end, she would perform the greatest mitzvah of all – the saving of a human life.  “I remember so distinctly – it was 3:51, and the boys’ trainer called to tell me that a vehicle had just smashed into my parked car,” Muradov recounted during a recent phone interview.  She had been walking a nearby trail when the call came in. “I’m a runner, so I rushed back and got to the spot quite quickly and it was clear right away that my car was not going to be salvageable.”

She seldom drives to the park, opting to walk the short distance with her boys usually, but on that particular afternoon, Muradov parked her car near a tree and set off for a leisurely stroll. “Once I arrived on the scene, I approached the vehicle of the person who had crashed into me,” she continued. “At first, I’ll admit, I had a few choice words to share, but I instantly realized that the man behind the wheel was unconscious.”  It may not seem like it, but this man would later come to be grateful that it was Muradov’s car he ran into.

Olga Muradov is a career healthcare provider. She graduated from nursing school in 2008 and worked as a registered nurse in the intensive care unit for many years at the Misericordia Hospital in Edmonton. In 2020, during the height of the global pandemic, she completed a Masters Degree in Nursing and attained the distinguished designation of nurse practitioner.

“Many people are still not clear about the difference between RNs and NPs,” explained Muradov. Nurse practitioners play a vital role in the medical field and share the same privileges and responsibilities as physicians. “A nurse practitioner is someone who has considerable experience working with patients as an RN and goes on to complete an MA or PhD in this area. We need to be recognized by our professional college, and complete extensive additional training and certification.  Nurse practitioners function autonomously, just from a nursing background while physicians receive a different kind of training,” she elaborated.

The general public may not know, but nurse practitioners are able to diagnose, order tests, prescribe, and even run their own clinics providing ongoing care just as a doctor would.  After more than a decade in the ICU, Muradov now specializes in general internal medicine.

“Once I saw that the driver was unconscious something switched, and my professional training kicked in.” She tried to rouse the man using all of the techniques and standard procedures she has performed so many times in the ICU. “Honestly, it was like instinct,” stated Muradov confidently. “He was nonresponsive, and I saw immediately that he displayed an agonal breathing pattern.  This is not how people normally breathe,” she explained. “This is a reflexive type of breathing most often resulting from cardiac arrest.”

With a small crowd beginning to gather Muradov took charge of the situation just in time. She instructed someone to call 911 for emergency medical services and got other bystanders to help her extricate the man from the driver seat. “It took some effort to dislodge him and get him out. We laid him on the ground, and I started CPR.  I didn’t have an airway.” While the 911 operator counted out the necessary intervals, Muradov attended to the man performing chest compressions.  But, this time, there was no medical team, no vital sign monitors, no defibrillator, and no respiratory therapist on hand – just her.

“I was really worried for him,” said Muradov. “He was in serious medical distress, and I had no way of knowing, being there in the park, if his brain was receiving enough oxygen.” Despite the medical TV shows, and dramatic scenes played out in so many Hollywood films, CPR performed outside of a hospital is no guarantee of survival. “Only 1 in 10 patients who receive CPR outside of a hospital ever make it to discharge,” explained Muradov gravely.

“And that’s ‘discharge.’  That doesn’t mean they go home. Many suffer permanent brain injury because of oxygen deprivation and go on to long-term care facilities with round-the-clock monitoring.” She herself has seen it too many times, and so her concerns as the ambulance drove away were very real.

Within a few minutes, a woman identifying herself as the man’s wife rushed up with their dog. The two had been walking in the park, and her husband had gone to the car to drive and pick up their son. “I asked her to take down my number,” commented Muradov thoughtfully. “I told her that if she would be comfortable sharing information with me, I would really like to know how he is.” Muradov obviously did not share the dire statistics she knows only too well, but quietly hoped and prayed for the best.

Because of her quick response and lifesaving actions, the man was released from hospital after an astounding two weeks. “I did break a few of his ribs while performing the chest compressions,” admitted Muradov meekly, but because of her, this patient defied the statistics, and now leads a healthy, normal life with his loving family. “They are such warm people. They send me pictures: the first time he went golfing after the incident, their trip to San Francisco, and he recently turned 60.” Humble through and through, Muradov emphasized: “I only did what I was trained to do.”

One of the police officers who arrived on the scene to record witness statements later nominated Olga Muradov for the Edmonton Police Commissioner’s 2022 Citizen Award. She and eighteen other exceptional Edmontonians were honoured in a ceremony and awards gala on November 18th – an auspicious number to be sure. “It was incredible, and so humbling to be there,” she said. “I was able to attend with my older son, and I was so grateful that he got be exposed to so many incredible stories.  For a boy just past bar mitzvah, this teaches so many valuable lessons that he will remember throughout his life.”

If there is a larger takeaway that she would like to have result from this story, it would be to encourage people to get certified in CPR. “The man’s wife and son have now done their CPR training,” offered Muradov. “It’s important because it can make all the difference.  I’m just grateful that I was there at that moment, and I feel incredibly blessed that I was given the opportunity to contribute in this way,” she concluded meaningfully. Pikuach nefesh, the preservation of human life is a great honour, but one that Olga Muradov still recounts with modesty and grace. She and the man she saved remain friends to this day.