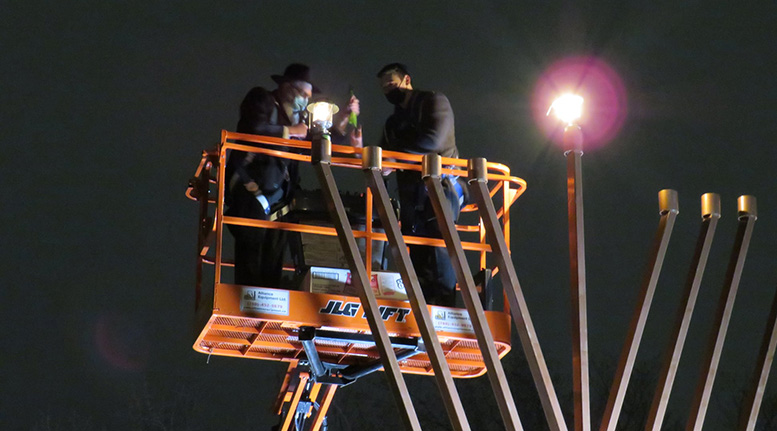 (AJNews) – “New normal” – who among us has not heard this emerging cliché?  “New normal,” for many, is a euphemism for extreme compromise, but on the evening of November 28, the first night of the Hanukkah, Festival of Lights, Edmontonians, Jewish and non-Jewish, got a much needed taste of communal celebration – something we have all long hungered for. 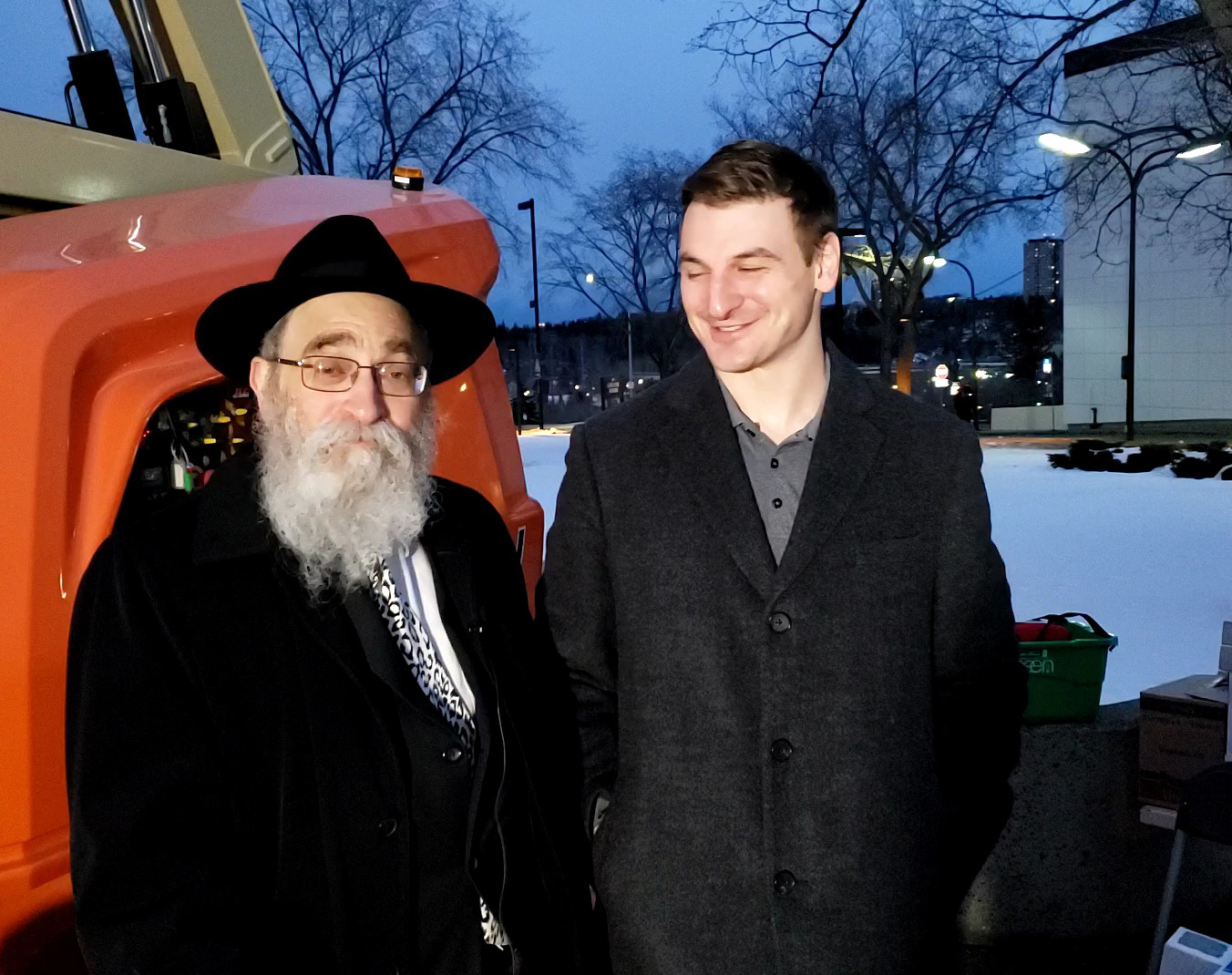 Thirty-seven cars with giant menorahs atop their roofs fell into formation starting from the Edmonton Chabad House. The menorahs themselves were created, built, and wired by local CTeens participants.

“The idea of spreading light through the city is an answer, in part, to darkness in the forms of anti-Semitism, apathy, and depression,” explained Rabbi Dovid Pinson, of Chabad Lubavitch of Edmonton.

“To combat darkness you don’t need to fight, you just need to add light!”

Foam light-up Hanukkah wands were distributed to each vehicle, and small toddlers, teenagers, and grown-ups alike began waving the strobing party favours jubilantly from their car windows. Zooming down the Whitemud, then Fox Drive, and along Whyte Avenue, the festive Hanukkah motor parade received enthusiastic honks from fellow motorists, and exuberant waves from shivering pedestrians. The row of lit up menorahs atop participating vehicles weaved its way through the streets of central Edmonton, illuminating the skyline with a glow befitting the holiday. 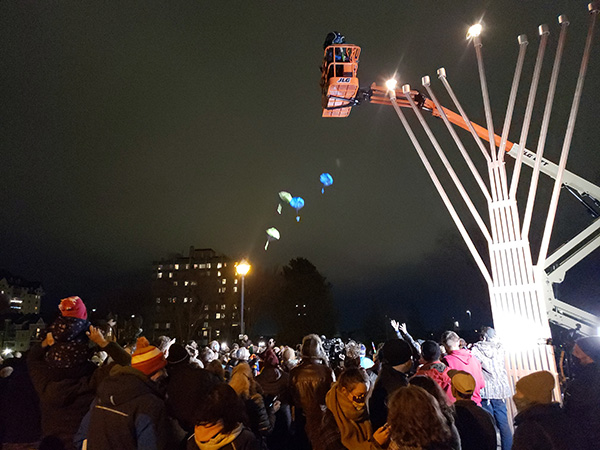 Dreidel packages were parachuted from the crane. Photo by Jim Moses.

Finally, the procession arrived at the Alberta Legislature, greeted by the resonating baritone voice of the unmistakeable Bert Malo. Volunteers handed out gift boxes stuffed with Hanukkah goodies to wee ones and adults too – nobody was left out! Emceed by the amazing Mike Sobel, of Global News, the occasion was an auspicious one – punctuated by the attendance of political dignitaries, and the newest Oiler on the scene – number 18, Zach Hyman.

Hanukkah 2021 marked the 30th public candle lighting in Edmonton. Steven Shafir of the Jewish Federation of Edmonton commented that this year we celebrate a “rededication to community life,” a beautiful sentiment as families gathered and greeted friends they had not physically socialized with in years. Those who were not comfortable attending in person were able to live stream the event from the comfort of their cozy couches, enjoying the light of their own menorahs. Meanwhile, the largest menorah in Alberta was lit by Chabad Lubavitch of Edmonton’s, Rabbi Ari Drelich and Oiler star, Zach Hyman.

Amarjeet Sohi, Edmonton’s mayor, wished the local Jewish community a happy Hanukkah.  After so much isolation, he emphasized that, “It is nice to see us celebrate light and talk about how we can work together to overcome darkness and the anxiety the darkness brings in difficult times and if there’s one community that understand the importance of resiliency and the importance of overcoming hardship and adversity it is the Jewish community.”

The event was attended not only by Edmonton’s mayor, but by Alberta’s Premier Jason Kenney, and MLAs David Shepherd, Lorne Dach and Christina Gray, Minister of Justice Kaycee Madu and Speaker of the House Nathan Cooper. 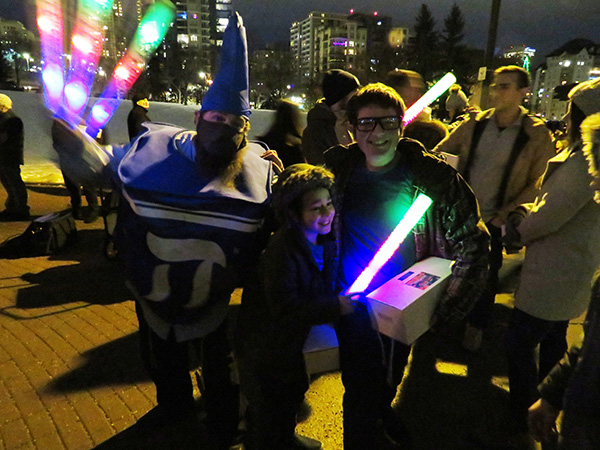 Rabbi Dovid organized the Menorah Car Parade and brought a lot of positive ruach to event!

Taking the podium, Rabbi Ari Drelich, a man who needs no introduction, mused: “I’ll have to speak like a New Yorker so you can all hear me.” He greeted eager onlookers with words of hope and healing for times to come: “We live in a day and age where it’s very dark out there, we are all very fatigued… G-d is sending us a message. He wants us all to be united; he is forcing us to be united.  And we all need to take the message of Hanukkah to dare to care. With G-d’s help the lights of Hanukkah will continue to grow brighter day by day.”

Then, attached to copious amounts of safety equipment, Rabbi Drelich, and Edmonton Oiler Zach Hyman ascended to the sky to light the first candle of the holiday. Rabbi Drelich joked playfully that he would not call Hyman by his first name, but by his Hebrew name, Zvi Moshe.  So, the candles of the first night of Hanukkah were ignited by Rabbi Drelich, and number 18 – Zvi Moshe.

Perhaps we all find ourselves unconsciously rolling our eyes when we hear the words “new normal,” but if this year’s community Hanukkah celebration is any indication, we are all closer than we think to the light at the end of the tunnel.

Be the first to comment on "Chanukah in YEG: A Giant Menorah, Oiler Zach Hyman, sufganiyot, dreidel parachutes floating from above, a Menorah car parade and more"