(Edmonton) – It is with great sorrow that the Linetsky family announces the passing of our husband, father, and grandfather, Eugene Linetsky z”l, on March 4 2021, at the age of 90. 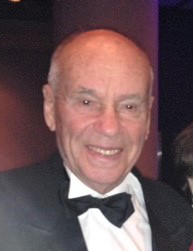 Eugene was born on March 10, 1930 in Periyaslov-Khmelnitsky, Ukraine. He was only 11 years old when the Nazis invaded the Soviet Union and his family was forced to evacuate to Uzbekistan for the duration of the war. After the war ended the family returned to Ukraine and settled in Dnepropetrovsk, where Eugene’s father, Shulem, worked in construction. There, Eugene attended university and graduated with a degree in Civil and Structural Engineering in 1953 and went on to work in construction in Ukraine and Siberia until the 1970s. The year he graduated he also met Anna. They quickly fell in love, married in 1954, and went on to raise two children, Victor and Ella.

When the family decided that life for Jews in the Soviet Union was intolerable and chose to flee, Eugene and Anna made the difficult choice to leave their established lives behind and accompany their children on this difficult journey.  After making their way through a number of European countries they eventually settled in Edmonton in 1981.

Adapting to life in a new country, with a new language and new customs, is daunting even at the best of times, but especially challenging later in life. Despite being in his fifties, Eugene tackled these challenges with quiet grace, always doing what was required to best support his family. In all aspects of his life Eugene cared deeply about quality and a job well-done, characteristics that served him well in his work and business life and inspired those who worked alongside him. Incapable of idleness, he continued to find ways to contribute to family businesses well into his eighties.

Eugene loved sports, especially skiing, which he taught himself while in his fifties. He continued to ski with his grandchildren well into his late seventies. He loved to sing and dance, something certainly remembered fondly by anyone that attended a party with him.  He also loved to travel, and he and Anna traveled extensively around the world after they retired.

After suffering a stroke four years ago, he spent his last two years at OPH, where his family visited him frequently. Anna would visit and care for him several times a day until his peaceful passing surrounded by his family.

Eugene is survived by Anna, his wife of 67 years, his children Victor (Lena) and Ella (Mickey), and his grandchildren David, Zuri, and Josh.

One of the family friends expressing condolences after Eugene passed away said, “Eugene was one of the good guys.” He certainly was, and that is how he will be remembered by his friends and family.

Be the first to comment on "Obituary for Eugene Linetsky"