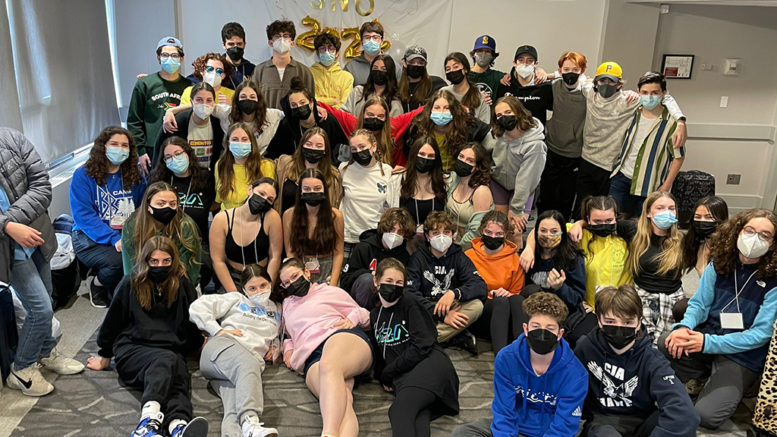 (AJNews) – The BBYO Regional Convention held Friday, March 11 through Sunday, March 13 brought a mixture of excitement and relief to Jewish teens from Saskatchewan, Calgary and Edmonton gathered for the first in-person convention since the start of the COVID-19 pandemic.

“It was an amazing weekend…powerful to watch,” said NWC BBYO Director Stacy Shaikin, who characterized the event as “the tonic they needed,” following two years of isolation. 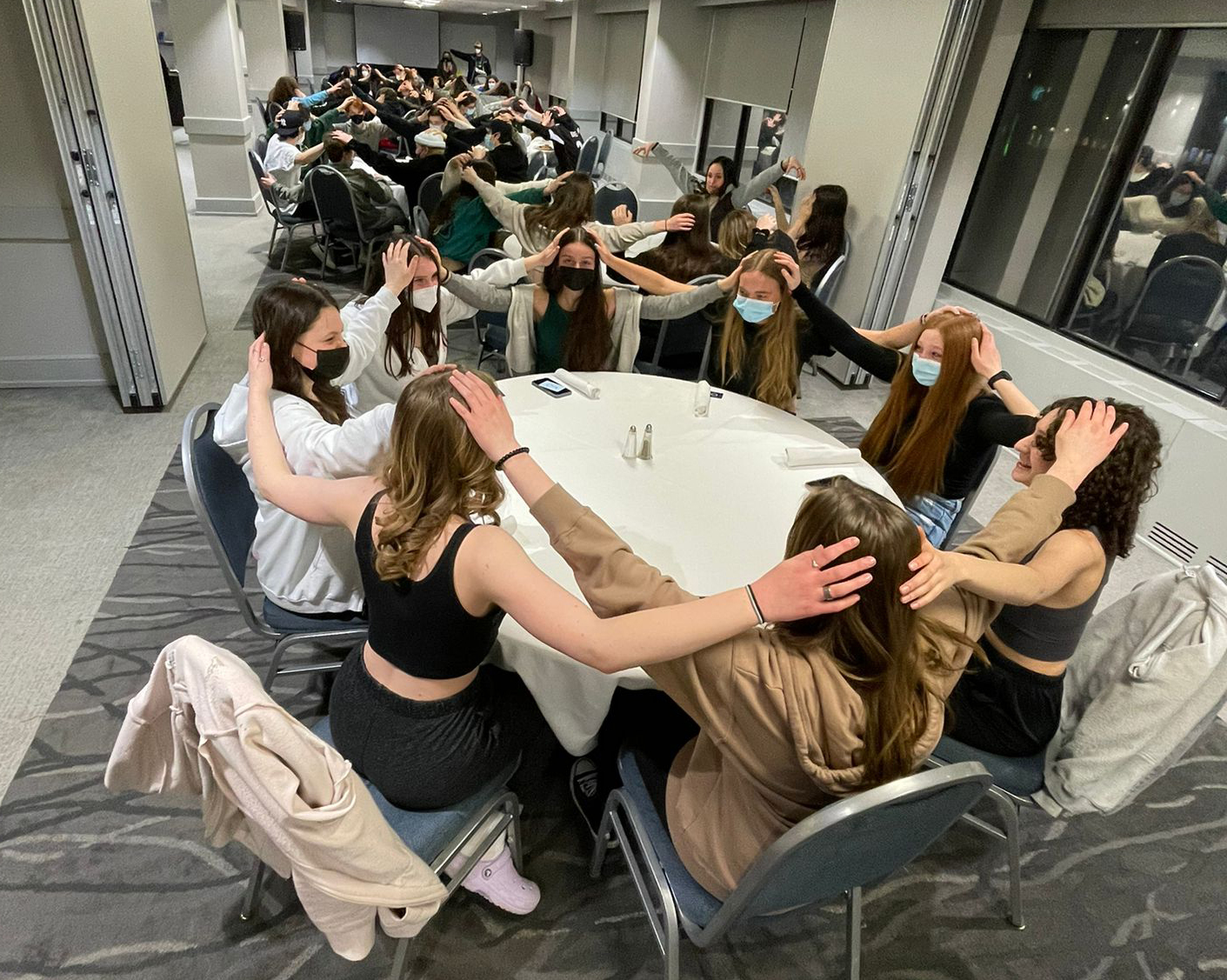 Blessing each other on Friday night of NWC Regional BBYO convention.

Veteran BBYO members, most of whom are now in Grade 12, enjoyed about a half a year together before the pandemic changed everything. For the vast majority of the teens who belong to BBYO’s constituent organizations, BBG (B’nai Brith Girls) and AZA (Aleph Zadik Aleph), the convention marked the first non-virtual gathering during the course of their membership.

Held at the Delta Marriott Hotel in Edmonton, the convention was high energy as organizers made up for lost time rolling missed milestones into one mighty weekend filled with song, work and play.

By all accounts, it was sheer excitement as youth and Northwest Canada Region BBYO staffers – themselves BBYO alumni – arrived in time for Shabbat Dinner.

“It was so much fun,” said Edmontonian Leah Campbell, who currently serves as Regional Nesiah (president) for the BBG Northwest Canada (NWC) Region.

“After these years of not being able to congregate, we’ve been waiting for convention. It was postponed a few times so it was so nice to finally be with everyone,” Campbell said, adding that she and her fellow organizers were thrilled that 60 teens joined in the fun. Unfortunately, half a dozen kids who had planned to attend were forced to isolate instead when they tested positive for COVID-19.

In the interest of keeping convention participants and their families healthy, all participants had to provide proof of full immunization, take rapid antigen tests immediately prior to the convention, and wear masks except during meals and when they were in their rooms.

Campbell expressed great pleasure in the active participation of a nine-person contingent from Saskatoon.

“It was awesome because, at least in my time at BBYO, we haven’t really been able to connect with them, so that was super special,” Campbell said. 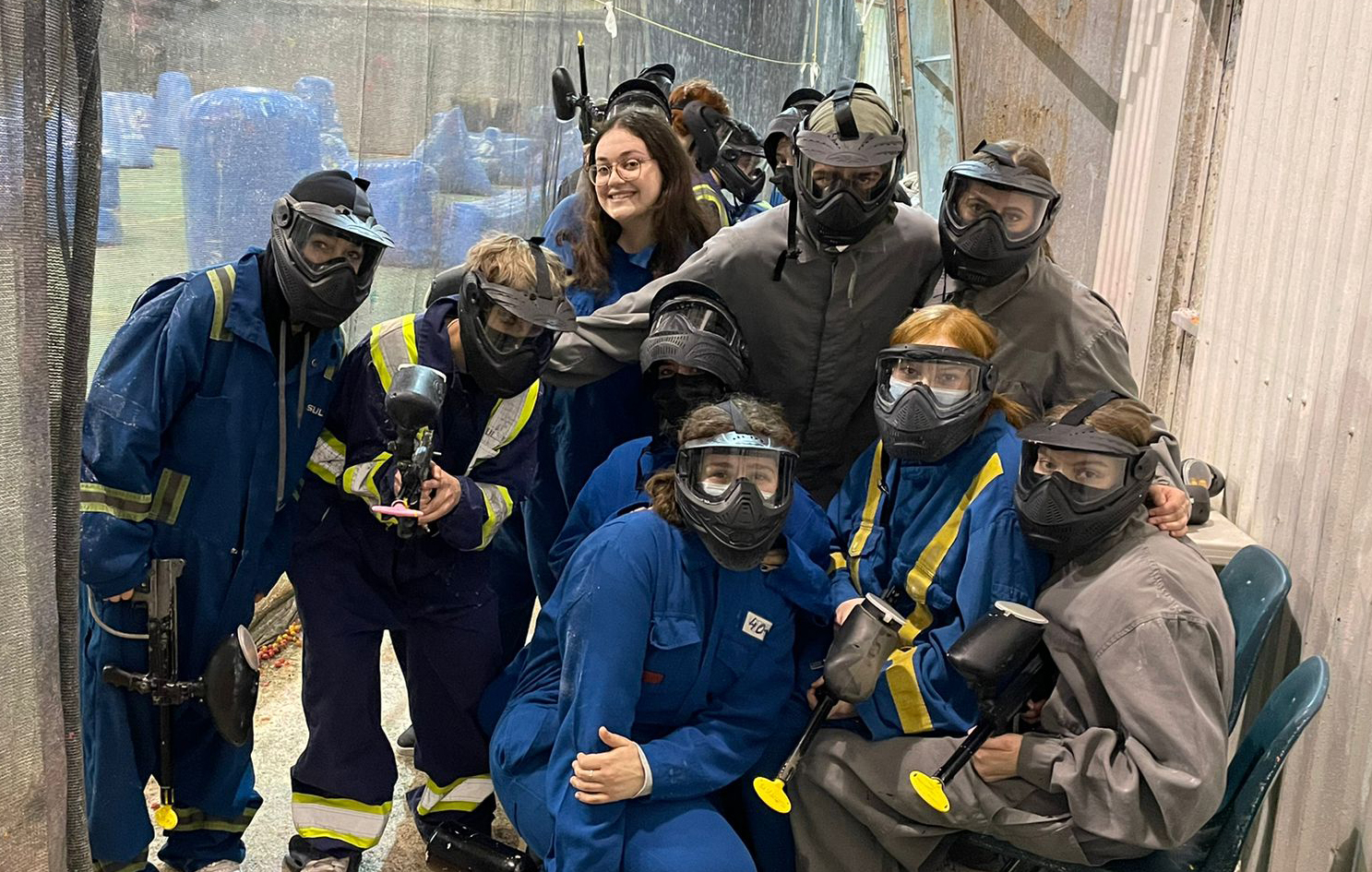 When you bring Saskatoon, Calgary and Edmonton together for these weekends, it really drives the bus,” said Shaikin. “It propels the whole lifecycle structure of a teen participating in Jewish life and the Jewish community.”

“We just thought that would be really special because so many people haven’t gotten the opportunity yet,” Campbell said.

In an organization run largely by the teens themselves, much emphasis is put on leadership training and the handing down from generation to generation of BBYO traditions that have stood the test of time.

Since most important business had been accomplished online during the pandemic, there were not any formal motions to pass at the convention, said Campbell, but they still held a business meeting with all the formalities, so as to prepare younger members for their future leadership roles.

On the lighter side, during Spirit and Film, teens generated videos, wrote and performed songs and participated in oratories.

“We give everyone two different topics, one for serious oratory and one for a funny oratory,” Campbell told AJNews.  “The best one is given an award.”

There were a couple of special guests at the convention, including International Nesiah Emma Zentner, who lives in Winnipeg.

“It was very special that she came to spend the weekend with us for our first in-person convention,” Campbell said.  “That was really cool.”

Also on hand was a comedian who entertained prior to dinner on the Saturday evening. 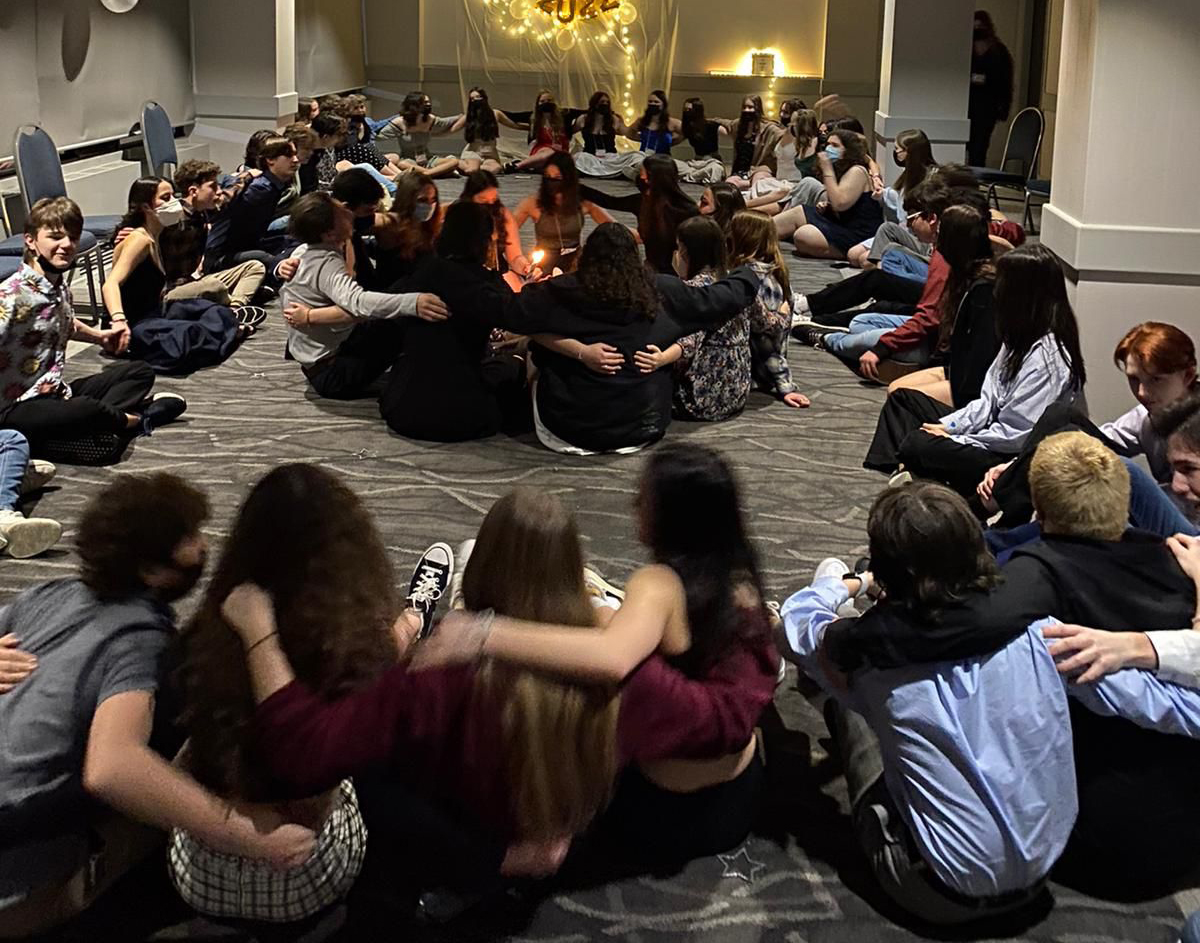 Havdallah is always a magical time at a BBYO convention.

Paintball was one of the convention highlights according to Stacy Shaikin, who added that the event was generously sponsored by the Jewish Federation of Edmonton.

Under ordinary circumstances, the Sweetheart and Beau dance – a BBYO classic – is held as a stand-alone event, but organizers decided to add it to the convention. Before the dance, typically during a meal, members of the AZA leadership will ask their BBG peers to the dance in publically performed poems or songs.

“This year we decided to switch the roles and have the girls ask the guys,” said Leah Campbell. She and Ben Magalnick were voted this year’s Sweetheart and Beau and fittingly crowned with tiaras.

“It was really fun,” Campbell said.

Campbell, who served last year as an intern with Stand with Us – an organization devoted to Israel advocacy and the fight against antisemitism – spoke highly of a program run by this year’s interns, Zoe Wright and Amy Shlomovitch, during which convention attendees wrote letters that will be inserted in the Western Wall in Jerusalem.

One teambuilding session featured a scavenger hunt in which teams had to search for letters and determine the spelling of a mystery word.

“It was a really fun way to get to know people you didn’t know before,” Campbell said, adding that the activity was “good for cooperation, leadership and bonding.”

“My favourite part of convention is usually Havdalah,” said Campbell of the candlelit service that marks the separation between Shabbat and the new week.

“It was so nice when everyone sang together with our arms around each other. It was just so special since we haven’t been able to do that for so long.”

In the position of honour, at the centre of the circle were fourth year members like Campbell who are marking their final year in BBYO.”

“Another thing that was my favourite, because I can’t pick just one, was Good and Welfare,” said Campbell. “We all sit in a circle and each person is given about a minute to talk about the weekend and anything they want to say about it.”

“It almost brought me to tears listening to what everybody had to say,” added Campbell. “First-years especially loved the weekend and they’re going to come more after that.”

They won’t have to wait too long with planning well under way toward the BBYO Spring Convention which will be held at Camp BB Riback during the first weekend of June.

“It’s where we do life speeches,” said Leah Campbell, adding that she is already working on hers.

Life speeches allow veteran BBYO members to reflect upon their experiences, speak about what the organization and their peers have meant to them, and share their wisdom and encouragement with younger members.

Also coming up at Spring Convention will be the election of the next Northwest Council Regional Board, Campbell said.

Stacy Shaikin – who also serves as director of Camp BB Riback – says that the positive influence of senior BBYO members on their younger peers is magic.

“The opportunity to hang out with some of the leaders really jazzed them up,” Shaikin told AJNews.

BBYO also benefits from the synergy of community partners that support the organization and their quarterly conventions.

“The power of bringing all these people in the community together still exists.”

Shaikin also has high praise for the small group of professionals who assist BBYO teens in steering the work of AZA and BBG.

“The staff have been incredible,” Shaikin told AJNews, lauding the work of Dani Uretsky (in Edmonton) and then Barry Pechet (BBYO City Supervisor in Calgary) who had overseen the work of the region prior to Shaikin’s appointment as Director of the NWC BBYO Region.

Pechet took things over during the pandemic and had no easy task in keeping everything together virtually, Shaikin said.

“He was such a rock for Northwest Canada BBYO,” added Shaikin who also praised the work of Eliyanna Forbes, BBYO City Supervisor in Edmonton.

“Five years ago they had one person from Saskatoon coming to convention,” said Shaikin. “She brought nine with her and two advisors who were just invaluable to the weekend, keeping the teens safe and happy, on time and organized.”

“We had a blast together working the weekend,” said Shaikin of his dream team.

The idea for an international Jewish youth group that would be international in scope was the brainchild of Sam Beber, a young law graduate in Omaha Nebraska, in 1924. When the project was presented at a B’nai Brith Convention in 1925, the organization was swiftly embraced nationally.

In 1926, Calgary became the first location outside the United States to boast an Aleph Zadik Aleph (AZA) chapter. The first Aleph Gadol was Sam Litchinsky (whose name is among those on the charter).

AZA Chapter #121 was established in Edmonton in 1930 and, in 1947, was renamed the Mandel Bloomfield Chapter to honour the memory of one of its own. Tragically, Flight Sergeant Mandel Bloomfield was killed in action on July, 1942, during World War II.

In 1964, a second Edmonton AZA chapter, Ben Zvi Memorial Chapter #1564, was created due to rising enrollment. It was, however, short-lived, surrendering its charter in 1967.

The first Calgary B’nai Brith Girls (BBG) chapter – Daughters of the Star (DOTS)—was established in 1947. Other chapters followed including Aviva (established between 1957 and 1960); Bat Shemesh chapter (1972), under the inaugural leadership of Deborah Shatz, now publisher of AJNews; and Zahav.

BBYO NWC Region, which serves teens in Alberta and Saskatchewan, is believed to have been established in 1950. Ever since, the work done throughout the region has been a labour of love for successive cohorts of teens, their adult advisors, BBYO professionals, volunteers and the community organizations that support their many activities.