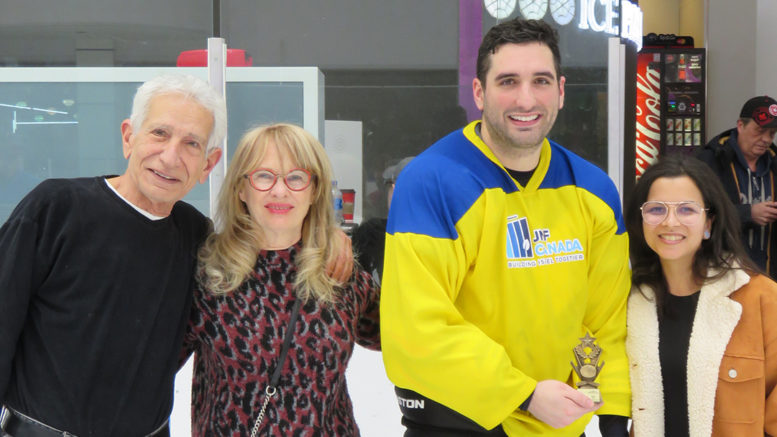 The JNF Alberta Cup honoured the memory of Nathan Reboh OBM with a special Mensch Award. Selena Taylor presented the award to Jasen Reboh, pictured above with Emile and Gisella Reboh.

(AJNews) – The 2022 JNF Alberta Cup brought the community together for a highly anticipated hockey tournament which took place at the West Edmonton Mall Ice Palace on Feb. 26 & 27. Camaraderie, joy, and fun were common themes throughout the tournament, with friends, families, and colleagues reconnecting after a long pause on social gatherings. JNF Edmonton Director, Jay Cairns, hosted this incredible event for the fourth time. He expressed his sincere appreciation of team captains Mario Morin, Dan Moser, Lee Tappenden, and Stacy Shaikin, the players and the generous sponsors who brought the event to life. 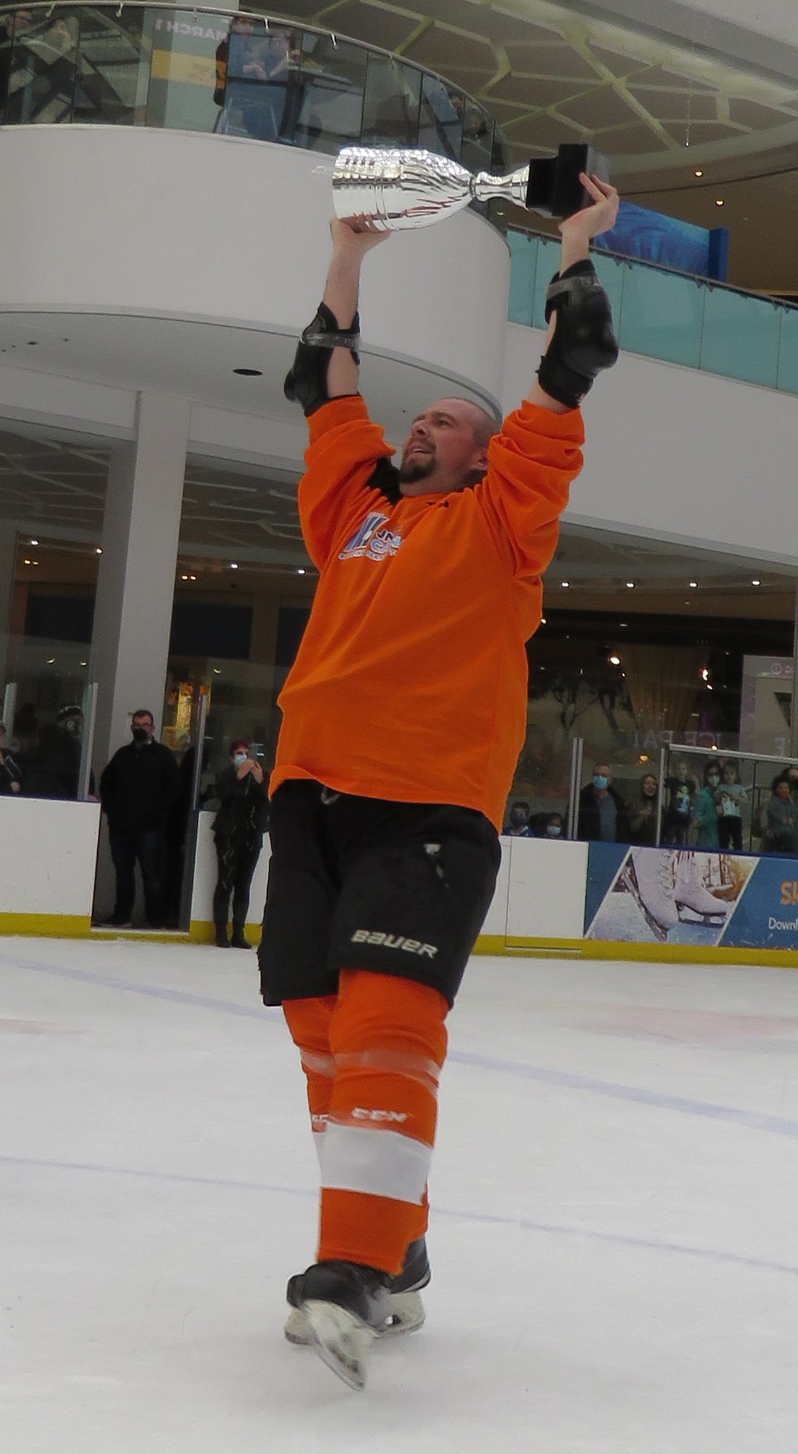 “The 2022 JNF Alberta Cup was a sign that more good things are coming!” remarked Cairns. “It was a pleasure to host such a great event with such a positive group of people. It’s more than just a hockey tournament when you see the people and the relationships that deeply connect. It’s such a warm atmosphere of friendship – whether you saw each other yesterday, last year or several years ago.”

This year, the Fighting Yids, Chai Shticks, Charlestown Ribacks, and Tu Bi’ Shevat Tigers were the four teams competing for the prized Cup.

Players hit the ice beginning Saturday, February 26 at night, with games picking up again bright and early Sunday morning. The play-offs featured Fighting Yids and Tu Bi’ Shevat Tigers, with the Tigers taking home the Cup in the championship game.

The puck drop for the final game was led by presenting sponsor Barry Slawsky and his son James, who also awarded the Alberta Cup to Lee Tappenden, captain of the Tu Bi’ Shevat Tigers, at the end of the tournament.

After the final game, an awards ceremony was held to honour the memories of Nathan Reboh z”l and Stevie Schwartzberg z”l, two young men who made a meaningful contribution and impact in our community. Members of both play-off teams wore NR patches on their jerseys to pay tribute to Nathan, who played goalie with the league for several years.

“The tournament has become an opportunity to honour and remember these two outstanding community members who are gone, but not forgotten, and their legacies live on through their friends, families and the JNF Alberta Cup,” said Cairns.

“I am very honoured that the JNF memorialized my brother Nathan with this award and the teams that wore a patch in his memory this year throughout the tournament recognizing his intense love of hockey,” said Jasen Reboh. “I was so excited to play in my 1st JNF tournament, then I broke my hand the week before and, although the surgeon at the Kaye Clinic said no sports for 3 months, there was no way I wasn’t going to participate (I hope she doesn’t read the Jewish News!). I am so grateful to share this 1st honour with Nathan, and my family really appreciated the gesture.”

Charlestown Riback captain Stacy Shaikin and several players from Calgary participated in the event and although they didn’t win, Shaikin had some high praise for the tournament and his teammates. He said, “The Charlestown Ribacks had a blast together even though we weren’t the toughest test in the tournament. It was a thrill to put together this multi-generational Camp BB-Riback alumni team [including players from Edmonton and Calgary]. What an event and weekend it was. I was so proud to hang out with this crew and can’t wait to do it again next year!”

A highlight from this year’s event was a free skate with BBYO leadership including Shaikin, who is BBYO Regional Director, City Supervisor Eliyanna Forbes, and BBYOers. Family and friends also joined the players for an hour of fun skating at the Ice Palace. “It was really nice to see the BBYO kids come out for the skate,” said Cairns.

Proceeds from the tournament went to a Mobile Technology Lab project for Jerusalem’s vulnerable population. “JNF Canada is proud to partner with the Jerusalem Foundation in support of this important project aimed at strengthening the social fabric and enhancing community support systems.”

Several weeks after the tournament, Cairns reflected on how it is important for different Jewish organizations to contribute to the community calendar in a healthy way. “It provides different opportunities to connect, all under the umbrella of supporting Israel and the JNF.”

Events like these have a positive impact on the community as demonstrated by emails and comments sent to Cairns by community members. They expressed how the hockey tournament has become a multigenerational opportunity, and further congratulated the JNF for anchoring this event in the community calendar.

So, sharpen your skates and practice your puck handling, because the fifth 2022 Alberta Cup will be back in town before you know it!

Click here to view our photo gallery  plus photos from the free skate and the awards.