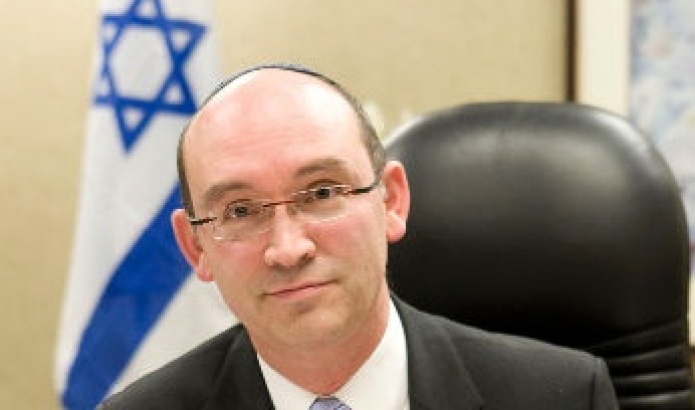 Israel's Consul General to Toronto and Western Canada DJ Schneeweiss will be in Edmonton on November 3 at Beth Israel Synagogue for an open conversation on the current situation in Israel.

(EJNews) – As Israelis continue to be victimized by terrorist attacks on a daily basis, Canadian Jews are hungry for updates about loved ones and they are overwhelmingly concerned about klal Israel. They have been gathering in synagogues to denounce the violence and pray for the wounded.

On November 3 at 7 pm, Israel’s Consul General to Toronto and Western Canada DJ Schneeweiss, will be in Edmonton at the Beth Israel Synagogue for an interactive evening of open, honest and respectful discussion about the current situation in Israel. Be sure to attend this important evening event to hear firsthand about the impact the violence is having in Israel and in Jewish communities across the Diaspora. There is no charge for this event which is sponsored by the Jewish Federation of Edmonton. For more information contact Tal Toubiana at (780) 487-0585 ext 204.

In a telephone interview with Canadian Jewish News, Consul General Schneeweiss, suggested supporters of Israel could take several steps to show their solidarity with Israel. He advised Canadians to learn as much as possible about the realities of events in Israel. “Become knowledgeable” about the situation and take to social media to inform friends and colleagues of the facts, he said.

A Solidarity for Israel prayer vigil was held in Edmonton at Beth Israel Synagogue on October 15 and speakers included Beth Israel Rabbi Daniel Friedman, Edmonton Kollel Director Rabbi David Laufer and Chabad Rabbi Ari Drelich. Extra prayers have also been added to services and programs in all the synagogues in Edmonton as well as throughout the world.

The Edmonton Jewish community is looking forward to hearing from the Consul General and discussing what we can do to help.

Consul General Schneeweiss was born in Sydney, Australia in 1964 and immigrated to Israel in 1987. A Masters Graduate of the Hebrew University of Jerusalem, he joined Israel’s Ministry of Foreign Affairs in 1994, serving as Policy Assistant to Foreign Ministers Ehud Barak (1995-1996) and David Levy (1996-1998).

DJ’s first overseas posting was as Press Secretary at Israel’s London Embassy from 1998-2002, during which time he was recognized by Diplomat magazine as the most effective Embassy spokesman in London.

From 2003-2006, DJ served as Policy Advisor to Foreign Minister Silvan Shalom and from 2006-2009 as Israel’s Deputy Ambassador to China. From 2009 until taking up his duties in Canada in August 2012,  Schneeweiss was Director of Civil Society Affairs in Israel’s Ministry of Foreign Affairs.

The Consulate General of Israel in Toronto serves as the official representative office of the Government of Israel in Ontario and the Western Provinces. The Consulate’s mission, in addition to the  consular services it provides to Israeli and other interested citizens, is to promote mutually beneficial cooperation between Israel and our Canadian partners in government and across civil society in all fields of mutual interest, with particular focus on hi-tech and innovation, cultural exchange, and inter-community relations. Founded on the bedrock of shared values and shared interests, the consulate works with local partners to build platforms for exchange which harness our respective strengths and qualities to enhance mutual understanding and deliver real benefits to Israel and Canada alike.

Be the first to comment on "Nov. 3: An Open Conversation with Israel’s Consul General in Edmonton"