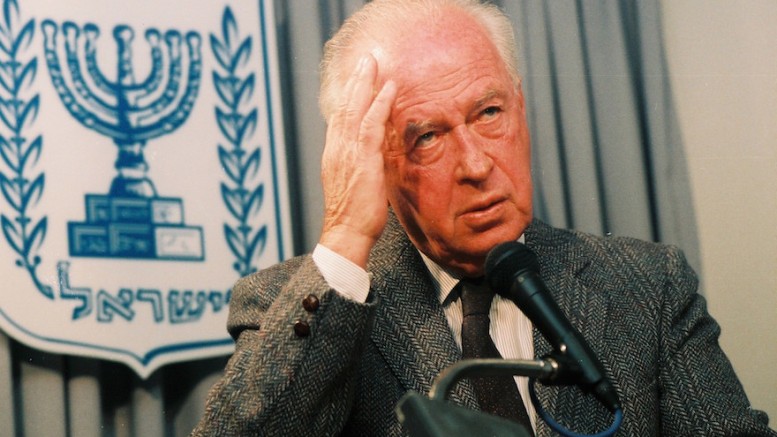 Israeli Prime Minister Yitzhak Rabin was assassinated at a rally in Tel Aviv on Nov. 4, 1995. (Flash90)

In the two decades since Rabin’s slaying at the hands of a Jewish extremist, Yigal Amir — the killer opposed a peace deal with the Palestinians — Labor has fallen from being Israel’s founding party and moderate-left flagship to competing among a handful of opposition factions, a perennial loser in Israel’s elections.

“It’s hard for [Labor] to win because most of the nation is convinced that with the Palestinians, it’s impossible to get to an agreement,” said Bar-Ilan University political science professor Shmuel Sandler. “The issue of security is the top issue that influences the Israelis. It’s not like in the U.S., where ‘It’s the economy, stupid.’”

Labor and its predecessors ran the government uninterrupted for the Jewish state’s first three decades — from founding Prime Minister David Ben-Gurion through the leaders who brought Israel through the victorious Six-Day and Yom Kippur wars.

Then, beginning in 1977, there were a series of close contests with Likud, its right-wing rival. Likud won three of the next four elections, two of them by just one seat. Labor and Likud effectively tied in the 1984 election and shared power.

But since his assassination, Labor’s story has been one of near-total failure, with experts split on how the party should move forward: by embracing its core ideology, or moving toward the political center.

Except for an abortive government from 1999 to 2001, Labor has lost every election since 1992. Likud or its offshoot Kadima have ruled Israel uninterrupted for nearly 15 years. Elections in 2009 and 2013 saw Labor drop to fourth and third place, respectively. Its center-left, pragmatist mantle has been adopted by newer parties like Yesh Atid, which was founded three years ago.

Labor’s problem, according to Hebrew University political science professor Shlomo Avineri, is that the party hasn’t been able to present a viable alternative to Likud’s hard-line approach.

Ever since Rabin’s government began making territorial concessions to the Palestinians, Labor’s hawkish opponents have attacked the party as weak and dangerously naive. Rabin, a venerated ex-general who won the Six-Day War, had touted his security credentials in the 1992 campaign. The only other Labor candidate to win, Ehud Barak in 1999, was the most decorated soldier in Israel’s history.

But after Rabin’s death, Likud took aim at his bureaucratic, dovish successor, Shimon Peres, now 92. Ads in 1996 for Likud candidate Benjamin Netanyahu accused Peres of “gambling too much with Israel’s future,” being “disconnected from reality” and planning to divide Jerusalem. Netanyahu won the election.

“Mr. Peres, you brought our security to an unprecedented nadir,” Netanyahu said in a 1996 debate. “ This is a direct result of your terrible policy, that placed our security, our children’s security, in [Palestinian Authority President Yasser] Arafat’s hands.”

It’s a message Likud has repeated ever since, and one that has resonated following a four-year intifada in the early 2000s that killed some 1,000 Israelis. Vying for his fourth term this year, Netanyahu won the election after telling voters that he would not establish a Palestinian state in the coming term or divide Jerusalem.

Israel’s changing demographics have also hurt Labor. The million immigrants who arrived from the Soviet Union in the early 1990s tend to vote for right-wing parties. Religious Jewish Israelis, who also generally support the right, have grown in number as well.

In recent years, Labor has tried to rebrand itself as more than the party of peace. In 2013, party leader Shelly Yachimovich called Labor a “centrist party” and campaigned on its social-democratic credo, focusing on housing and the economy while barely talking about peace and security. Labor finished third in the election, behind Likud and Yesh Atid.

Ahead of this year’s vote, Labor again campaigned on negotiations with the Palestinians while still branding itself as centrist. The party united with former Likudnik Tzipi Livni to burnish its centrist credentials, but still came in second to Netanyahu’s Likud.

And since it lost, Labor has continued to eschew talk of peace, instead using phrases like “separation” and advocating a “diplomatic arrangement” with the Palestinians. In an address this month at the Yitzhak Rabin Center in Tel Aviv, Labor Party chairman Isaac Herzog pushed an Israeli-Palestinian agreement but did not use the word “peace.”

“The separation between the states needs to be applied politically in a diplomatic solution,” Herzog said. “We can’t ignore it unless [we] hide our heads in the sand.”

Sandler and Avineri say tacking to the center is still a good strategy for Labor, given Israeli demographics and skepticism of Palestinian intentions. But some party supporters say Labor will only return to power if it embraces Rabin’s unapologetic pursuit of peace.

“One of the fundamental and tough mistakes was that, since the assassination and the days of Ehud Barak, the party decided not to present a real alternative that followed Rabin’s path,” Labor lawmaker Hilik Bar told JTA. “We tried to take the party to the center on issues of defense and diplomacy, but we kept sitting in right-wing governments. We lost our identity.”

Be the first to comment on "After Rabin, why Israel’s Labor Party never recovered"