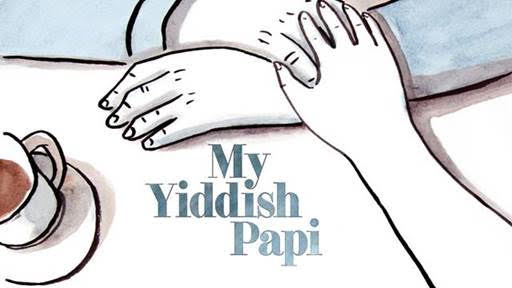 (Image provided by the NFB)

(January 25, 2019) – Starting January 25, the National Film Board of Canada (NFB) will be streaming Éléonore Goldberg’s animated short film My Yiddish Papi (Picbois Productions/NFB) free of charge across Canada on NFB.ca, as well as on the YouTube channel and on the NFB’s Facebook page. This online release of the film marks the International Day of Commemoration in Memory of the Victims of the Holocaust, which is observed on January 27.

With My Yiddish Papi, Éléonore Goldberg has made a personal short film about filial love, duty and the transmission of memory by honouring a promise made long ago: that of illustrating the adventures of her grandfather, a Resistance fighter during the Second World War.

In My Yiddish Papi, a young woman decides not to answer a phone call from her grandfather, unaware that it will be his last. When he dies, she is overwhelmed with guilt and regret and can’t sleep. But then she remembers a promise made long ago: to illustrate his wartime adventures as a member of the Resistance during the occupation of Paris.

Éléonore Goldberg is a Franco-Canadian filmmaker, animator and cartoonist. Her screenplay for My Yiddish Papi won the SODEC/SARTEC Award and the Special Jury Prize at the “Cours écrire ton court” contest in 2011. Her animated short Wandering was nominated for a Jutra (2014) and received awards at the Breakthroughs festival (2014) and Cinema on the Bayou (2015). She’s worked on a number of animation films, including Dominic Goyer’s L’origine des espèces(2016) and Cam Christiansen’s WALL (2017), and illustrated the graphic novel The Young Lady in White (2016).

The National Film Board of Canada (NFB) produces groundbreaking animation at its studios in Montreal and at NFB centres across Canada, as well as via international co-productions with many of the world’s leading auteur animators. The NFB is a leader in developing new approaches to stereoscopic 3D animation and animated content for new platforms. The NFB has created over 13,000 productions and won over 7,000 awards, with NFB animation accounting for 7 of the NFB’s 12 Oscars, as well as 6 grand prizes at France’s Annecy International Animated Film Festival, 4 Palmes d’Or at the Cannes Film Festival and 2 Golden Bears at Berlinale. To access acclaimed NFB animation, visit NFB.ca or download its apps for mobile devices.