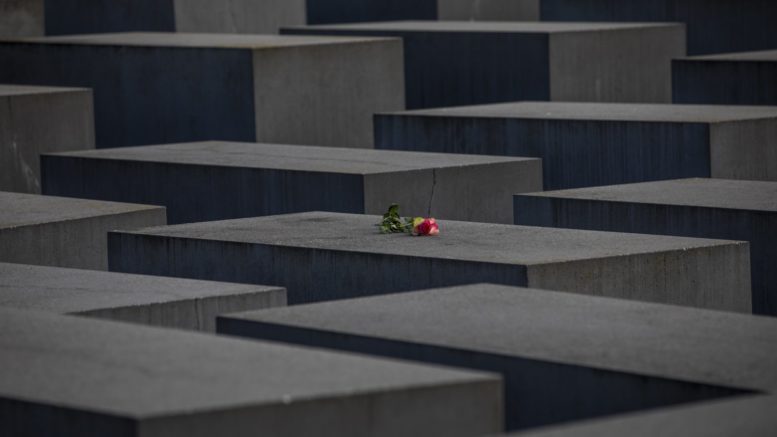 A rose is placed on the Holocaust Memorial on the International Holocaust Remembrance Day on January 27, 2021 in Berlin, Germany. (Maja Hitij/Getty Images)

(JTA) — Holocaust remembrance day programs in Jewish communities have stuck to a familiar form for decades, featuring Holocaust survivors sharing their stories followed by the lighting of yahrzeit candles and the recitation of commemorative prayers.

But that model of memorial faces a problem that is growing more pressing each year: the dwindling number of survivors still living and able to share accounts of their painful past.

That reality drove Michal Govrin, an Israeli writer and professor, and the daughter of a survivor, to adapt perhaps the most universally recognizable Jewish practice, the Passover seder, into a new ritual to mark Yom Hashoah, Israel’s Holocaust Remembrance Day.

“How are we going to transmit? This is the big question, and that is why I started the whole project,” said Govrin, whose mother survived Auschwitz.

The program, which Govrin developed in Israel as a researcher at the Van Leer Institute and launched in 2015 at the Shalom Hartman Institute in Jerusalem, will be held in the United States for the first time this year.

It’s an attempt not only to create a lasting ritual to commemorate the Holocaust that can outlive the survivors, but also to shift the focus from the tragedy to spend more time on internalizing its lessons about combating evil.

“We do need new ritual around this experience because we can’t continue to just have Holocaust survivors speak. It’s not going to work forever,” said Rebecca Starr, the Shalom Hartman Institute of North America’s Midwest director, who is working to bring the program to the United States.

More than 500 people are registered for the American institute’s Zoom program on Wednesday night. The Hartman Institute plans to expand the program next year with gatherings held in smaller group settings, like in synagogues, community centers and even private homes, and has trained more than 70 American rabbis and educators to lead them.

Called Hitkansut, which means gathering in Hebrew, the program is modeled in part on the Passover seder, with a modified Haggadah guiding the ritual. It begins with an invitation to gather, much like the invitation at the beginning of the Maggid portion of the seder. If a Holocaust survivor is present at the gathering, he or she reads “the survivors’ call,” a short text composed by survivor Zvi Gil.

“The age of the Holocaust Survivors is drawing to a close,” the call begins. “Before long no one will be left to say: ‘I was there, I saw, I remember what happened.’ All that will be left will be the books of research and literature, pictures and films and archives of testimonies. This will be a new era.”

The ritual continues with readings, including elegies taken from the liturgy for Tisha b’Av, the Jewish day of mourning that marks the destruction of the ancient Temples in Jerusalem, as well as diary entries from Holocaust survivors and a family story shared by a participant.

Some of the stories in the Hitkansut Haggadah include those from outside Europe that are not typically thought of as Holocaust stories. One is the account of Hayun Hayun, a Jewish boy in Libya who was 9 years old when he was sent with his family to a camp under Nazi control. He later immigrated to Israel.

“Death was better than life,” Hayun said in the featured testimony about life in the camp.

Readings about evil and the nature of humanity follow before the ritual moves into Yizkor for the Righteous Gentiles who saved Jews during the Holocaust.

Starr said the observance is intended to leave participants with a somewhat different feeling from a traditional Yom Hashoah program.

“It’s a little bit of a different focus away from the complete and utter destruction and tragedy,” she said. “I think it tries to have an uplifting voice.”

The ritual concludes with passages intended to transition from the memories of destruction, allowing participants to move forward and take its lessons into their lives.

Among the final readings are two poems: by Hersh Glik, commemorating the fighters in the Warsaw Ghetto Uprising, and Hannah Senesh, a Hungarian immigrant to Israel who parachuted into Yugoslavia to join the partisans and later was captured and executed in Budapest. Rather than focusing on the tragedy of the end of her life, the Senesh poem marvels at nature and asks God to never let nature’s forces cease.

Govrin hopes that participants walk away from the ritual feeling transformed by the experience of remembering and channeling the memory of the Holocaust into resolve not to repeat the wrongs of the past, even if the survivors who witnessed them are no longer around.

“We lament, we share names, we light candles, but we don’t stop there,” Govrin said. “Most ceremonies stop at the lamentation, at the Yizkor, but we continue. We face evil that is still confronting us now.”