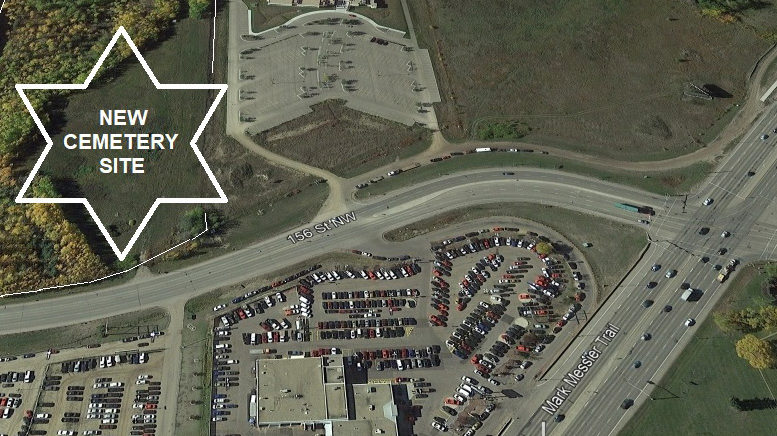 An aerial view of the site designated for the new Edmonton Jewish cemetery.

(AJNews) – Although Edmonton’s century-old Jewish Cemetery will still actively bury decedents from the community for at least the next 30 years, preparations are already underway for developing the site of the city’s new Jewish cemetery. “You see we still have plots that have been set aside for spouses,” explained Marshall Hundert in a recent Zoom interview.

The current cemetery, sitting on just 6 acres has operated for more than 100 years.  The new location, an astonishing 30 acres just off Mark Messier Drive, will stand in service of Edmonton’s Jewish community for many, many generations to come.

Dave Marcus, Vice-President of the Edmonton Chevra Kadisha explained that “the land was purchased in 1996, but our development efforts are really gearing up now.”

They estimate that the new cemetery will become active sometime in the spring of 2022, “weather permitting, of course,” added the group’s longest serving member and Past-President, Jerry Cooper.  Cooper, who has been a volunteer at the Chevra Kadisha since 1971, trained by Nate Segal and Don Bliss, anticipates that the transition will be a smooth one provided that their fundraising campaign is successful.  “Everything will be the same.  Nothing is going to be changing – except for location,”  he noted.

Rob Lederer, the Chevra Kadisha’s second longest serving member, elaborated.  “We need to discuss the broader perspective here – we have always served the community in a specific way, governed by Jewish law, and this new cemetery is a continuation of this.”

In the most recent UJA fundraiser, the new cemetery was included as a bonus campaign.  But the group will soon begin its own independent fundraising in earnest.

“There is a considerable infrastructure that needs to be taken into account, landscaping, clearing roads, fencing, underground utilities creating serenity gardens – many necessary things that people may not realize,” Hundert explained.

“We want to make sure that there is a similar aesthetic sense connecting the two locations,” added Lederer.

In addition, the new cemetery location will need a chapel to house funeral services.  While the current chapel seats approximately 120 people, it is hoped that the new building will accommodate upwards of 160.  Around a dozen original oak pews from the downtown Chevra Kadisha sanctuary have been in storage for the last several years and will be installed in the new chapel.

“We are really hoping that a family from the community will want to sponsor the building of the new chapel – perhaps in memory of a loved one,” said Hundert.

“This really is a momentous occasion,” added Marcus. “This new site will be active long after we are gone and will continue to be of service to the community for generations; contributing to its creation is a once-in-a-lifetime opportunity.”

For those concerned with accessibility, Hundert, Lederer, Cooper, and Marcus believe that the new site, 14710-156 Street, is, in fact, closer to the heart of the Jewish community than the current one.

“Let’s be honest, most Jews live on the West End, and all you need to do is hop on the Henday,” said Hundert.  Marcus has vowed to advocate for bike racks, and the city already has plans in the works to maintain regular bus service in the area.

“The new cemetery is still in Edmonton, and not as far away as some might think.  We searched long and hard for this location – we began looking sometime in the late 80s I’d say,” said Cooper.

As Lederer put it: “A Jewish cemetery is an essential part of having an established Jewish community.  The first things you need are a school and a cemetery.”  At present about 2 million dollars have been saved for this undertaking.  “This is about being fiscally responsible.  We will continue to maintain the grounds and care for the current cemetery once we have transitioned to the new one.”

Chevra Kadisha members believe that they will need to raise an additional 1 million dollars to complete the project.  “We serve the entire Jewish community – this truly is for everyone.”

To donate, visit canadahelps.org/en/charities/edmonton-chevra-kadisha or call: 780.482.3065.