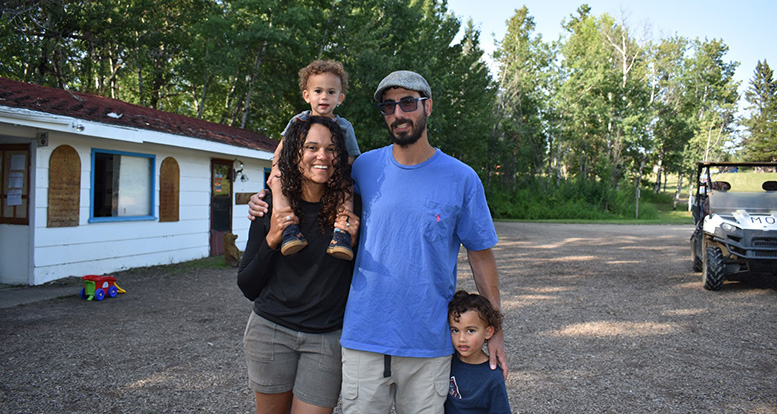 (AJNews) – Although COVID-19 put the kibosh on last summer’s Camp BB-Riback season, Camp Director Stacy Shaikin says there has been plenty of positive action at the camp which will open registration for summer 2021 this month.

While the trajectory of the pandemic remains uncertain, Shaikin’s goal is to get a good forecast of potential camper numbers so that he can staff up for a season that will look a little different than previous ones given the need for stringent COVID precautions. 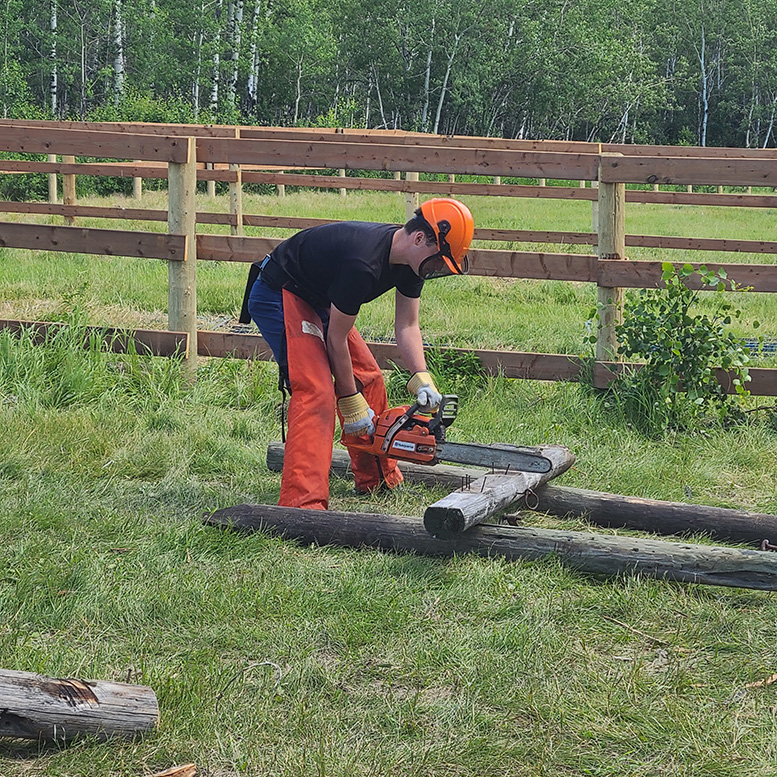 Despite Camp BB-Riback being cancelled this past summer due to COVID-19, a group of dedicated volunteers, rebuilt the horse stable fence and worked on other much needed maintenance projects.

Camp remains a labour of love for Shaikin, who grew up in Calgary attending what was then the Calgary Hebrew School (now The Calgary Jewish Academy). He spent summers at Camp BB beginning in 1986, and then worked at the camp into his early 20s. His summers at Camp BB spanned the tenures of seven camp directors including his most memorable mentor, Phil Haid.

Shaikin, who previously worked at Enmax, had been considering a career change when the sudden resignation of the previous camp director in spring 2018 paved the way for a “more gratifying” position he could wrap his cap-covered head around.

In previous conversations with friends and camp alumni, Shaikin had found himself thinking “What a great gig it would be to be the summer camp director.”

And suddenly he was.

During the first summer season, Shaikin says he leaned heavily on the expertise of long-serving Assistant Director Emily Wolfe and Billy Sky, grandson of the late Bill Meloff. Shaikin also had some family support as his wife Nancy – a community paramedic for AHS – pitched in at the camp infirmary.

Nancy, who was raised outside the Jewish community, was able to look at the camp with fresh eyes.

“She saw that the experience for kids is amazing and that whatever drew my generation to that camp still exists,” Shaikin said.

Shaikin, who has always enjoyed roles involving mentorship and leadership, worked hard to get to know his staff prior to that first season, though he was stymied when sorting out the identities of multiple Rachels and Rebeccas. Then he began again with 218 campers!

It helped that he knew many of the campers’ parents and quickly found all kinds of connections with the kids in his care.

Shaikin began to take serious note of the aging infrastructure of the camp. While giving campers a summer to remember, he generated a priority list to improve camp grounds and facilities.

That list included an $85 thousand replacement of the ropes course, which had hit its 25 year lifecycle, the purchase of pool heaters and the restoration of the Benjamin cabin which had been decommissioned due to deficiencies.

Top of Shaikin’s list was the removal of “30 years of junk,” that had become part of the camp scenery. 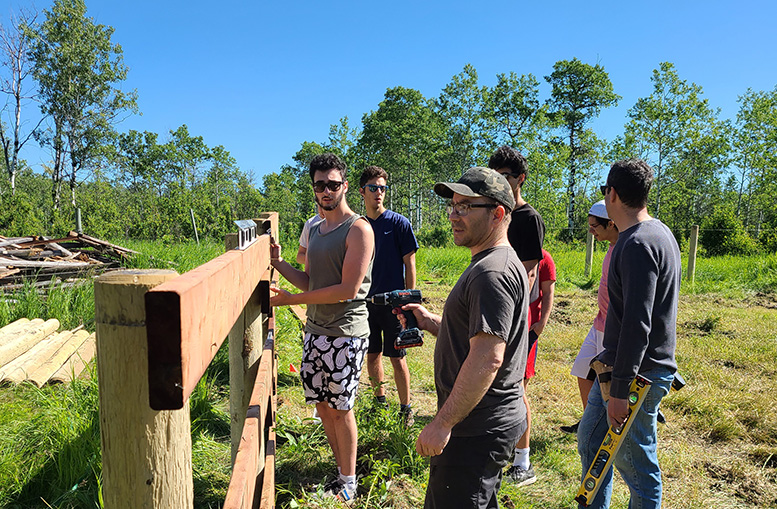 A dedicated group of volunteers worked on camp improvement and maintenance projects this summer.

While the prudent decision was made to cancel summer 2020 sessions as COVID-19 cases rose, Pine Lake nevertheless saw a beehive of activity on its shores. Shaikin and rotating crews of bubbled and physically distanced volunteers rolled up their sleeves to take on camp improvement projects. Some 40 youth pitched in, 15 at a time, with reduced mingling to ensure COVID safety.

“It was an unbelievable experience to see these 17, 18, 19, 20 year olds, who were not getting paid, come out and grind for me in whatever role was needed,” Shaikin recalls.

Completed and contemplated upgrades at the camp include a new stable fence, deck work at the swimming pool and a refit of the waterfront. Within the next few years Shaikin is planning a new amphitheatre to enhance waterfront activities. “It will be beautiful to have services overlooking the lake,” he said.

Fundraising for the pool is a current focus and has already netted a generous $35 thousand from Calgarians Faigel and Lenny Shapiro. Another large gift from the Sam Ousher Switzer Charitable Foundation is devoted to supporting the construction of a new dock.

Plans are also in place to redo the camp office, an initiative supported by the Oshry family in Edmonton.

Other upgrades will include refurbishing of cabins and the purchase of new bunkbeds. Shaikin is in conversation with donors interested in supporting cabin upgrades at a cost of $12,500 per cabin.

The volunteer team that worked on restoring the Benjamin Cabin this past summer will be rolling up their sleeves next season to take down an old changing room and build the waterfront deck.

Shaikin, who takes pride in the achievements of everyone around him, has particular praise for the camp’s dedicated board of directors including  co-chairs Ronnie Ploit and Cory Krygier, an architect Shaikin describes as the “facilities wizard.”

While a safe and comfortable camp environment is paramount, every bit as important is the programming that engages and inspires campers. 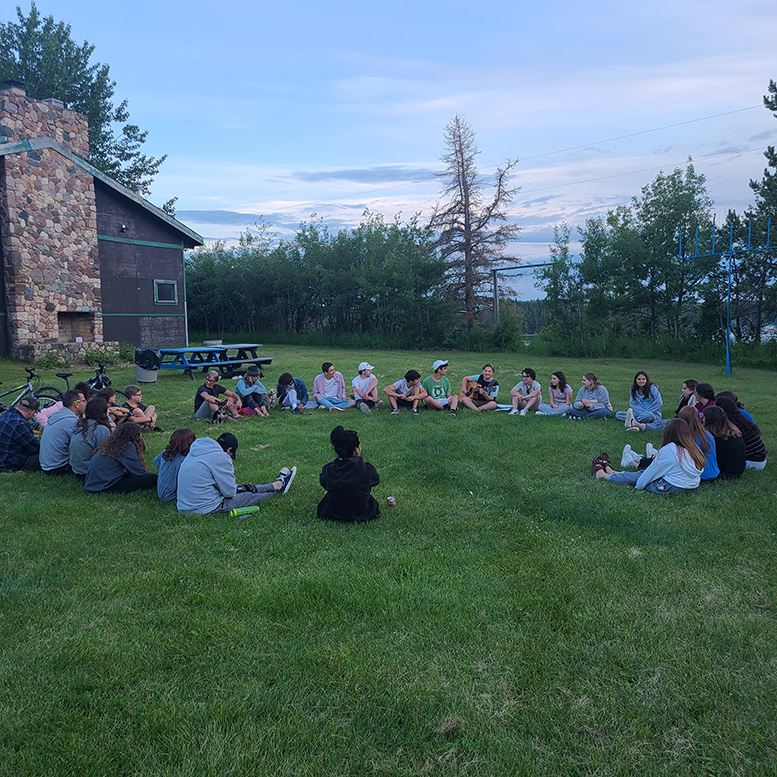 Plans are underway for Camp BB-Riback to re-open for summer 2021. (Photo is pre-Covid).

The recent appointment of a Judaic committee including rabbinical students Ilana Krygier Lapides and Lara Rodin and camp alumna and staffer Megan Raber, bodes well for the enhancement of Jewish programming once the camp can reopen.

“They understand the culture and are looking at what we have to tweak to add a more Jewish element,” said Shaikin.

Being a mensch is a good start, but it isn’t enough, added Shaikin who wants to beef up the Judaic aspects of the camp newsletter and to provide online Havdalah services at intervals throughout the year.

“I want [campers] to come away with respect and pride in who they are,” says Shaikin. “We are a Jewish camp and we have to encourage [Jewish] values.”

High on that list is inclusion and Shaikin is continuing the Camp’s long-standing commitment to serving campers with special needs. With the help of Calgary Jewish Federation Inclusion Manager Karina Szulc, the camp has partnered with Between Friends, a vital community resource that does pre-camp sessions with staff – including a dedicated inclusion team – to help ensure that all kids can “. . . have the summer they deserve,” says Shaikin. The camp has put a library in one of the cabins for quiet time, an especially important support for kids prone to sensory overload.

COVID has caused a bruising economic burden for summer camps. Shaikin and the Camp board of directors responded to the challenge by launching an emergency campaign, renting accommodations to families, conducting retreats and applying for every possible grant in order “to keep the lights on” last summer, Shaikin said.

As of December 2, the camp has met its $300,000 goal for COVID emergency relief thanks to grants from the Alberta Government, Calgary Jewish Federation, Edmonton Jewish Federation, Edmonton Jewish Foundation and Calgary B’nai Brith Lodge #816. A number of parents donated what would have been their children’s 2020 camp fees while others applied those fees to the 2021 season.

All of that – and the largesse of countless generous individuals and community organizations since the camp opened in the 1950s – have been wise investments. 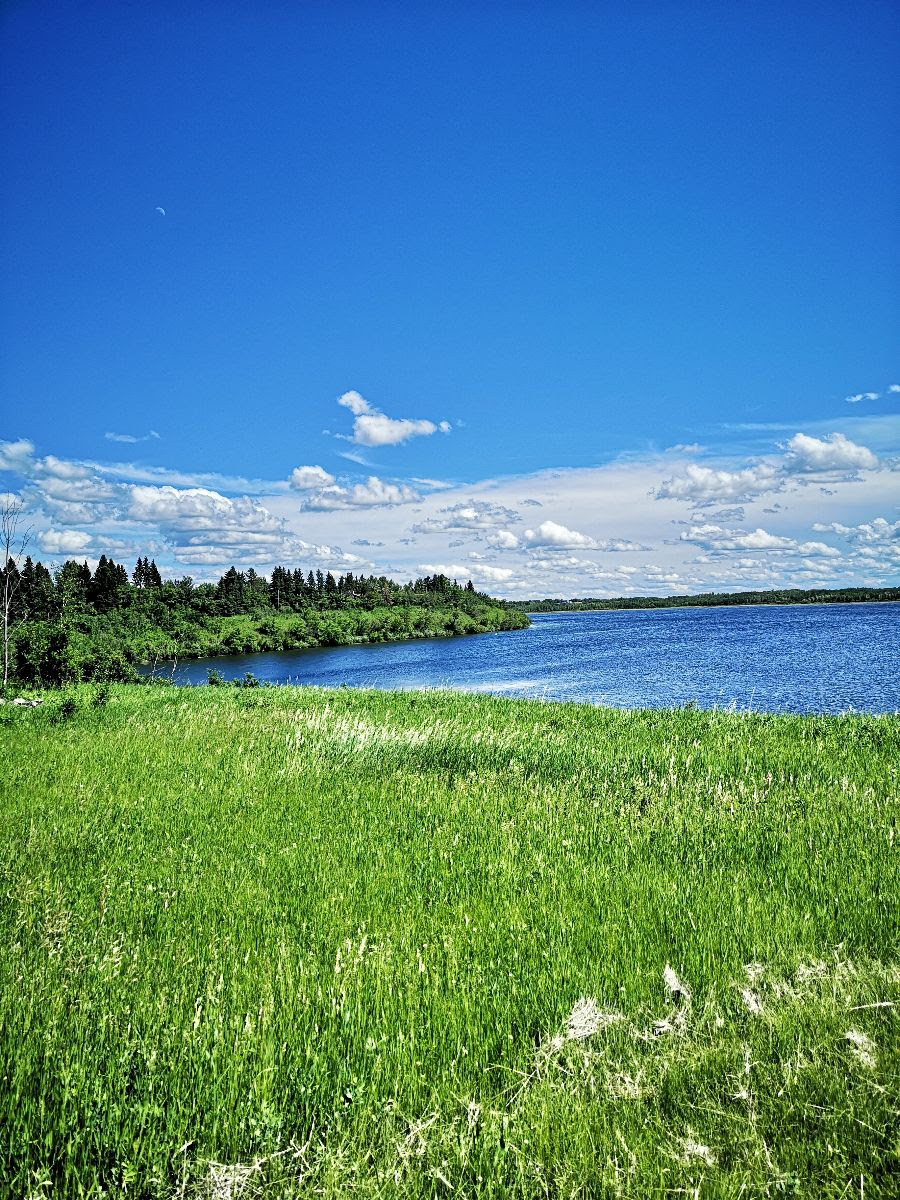 The Pointe at Camp BB-Riback.

While planning for summer 2021, Shaikin is working on raising endowment gifts and growing an operations reserve fund so as to ensure stability of the camp for future generations of campers. Camp BB Riback is one of 10 Calgary Jewish organizations that have partnered with Calgary Jewish Federation and the Jewish Community Foundation of Calgary to raise after-lifetime gifts through the Harold Grinspoon Foundation’s LIFE & LEGACY program.

While Shaikin says he didn’t sign up for fundraising, he is grooving to the challenge and is looking forward to taking a cultural philanthropy course through JCAMP 180. Another initiative of the Massachusetts-based Harold Grinspoon Foundation, JCAMP 180 provides matching grants which, together with other initiatives, will help the camp to upgrade, “ . . . so we can become what we’re supposed to be,” Shaikin said.

“This camp is a gem.  It needs to be taken care of like a child,” added Shaikin.

A father of two, Shaikin brings parental passion to the care and nurturing of all his campers – a calling that now requires even more attention to safety and health, given the pandemic.

“We are trying to stay agile when it comes to the virus,” says Shaikin as he prepares to open camper registration.

December will see a flurry of Zoom meetings during which Shaikin will meet with staff, camper cohorts and parents. In addition to speaking with the camp family in Alberta, he looks forward to reengaging members of the Saskatchewan Jewish community.

“Saskatchewan was a huge part of the camp while I was there,” said Shaikin. “We can help them and they can help us.”

In addition to imparting important information about the camp – particularly in light of COVID – Shaikin looks forward to listening to parents, campers and staff and helping to actualize  their hopes and aspirations for summer 2021.

Senior campers who were to have ascended into the Leadership Training Program (LTP) and those who were to have served as Counsellors-in-Training (CITs) last summer are hoping that some of the highlights they missed are recoverable. Shaikin is working on the blend and has plans to move Wonder Week (one week sessions designed to acclimate younger campers) to the second camp session in August when there is less action and a better opportunity to enhance their experience.

Let’s hope that the timing will be right for campers to once again put on their blue and white sweaters, the dirtier the better, and pass through the gates of Camp BB Riback for a safe and fun summer of ‘21!