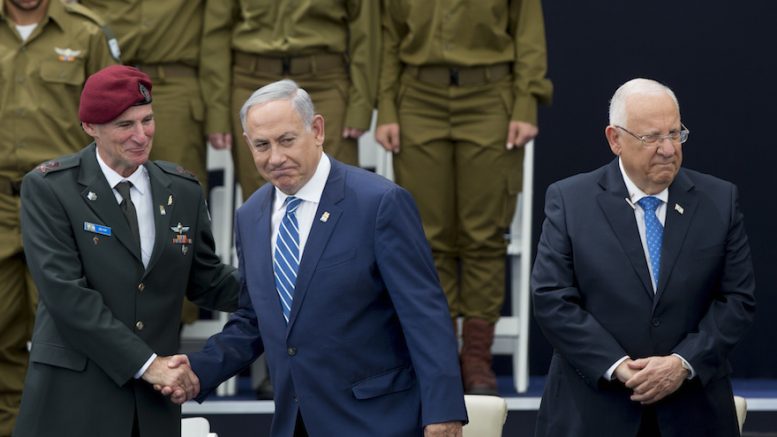 In a series of three statements this month, Netanyahu repeatedly stressed the need for peace with the Palestinians. He called the peace process one of his highest priorities and hinted that a renewal of talks might be underway.

Responding to a question about the peace process on Twitter on May 12, Israel’s Independence Day, Netanyahu said “there’s nothing I want more or am more active on, in many ways you don’t know.” Later that day, speaking to foreign diplomats in Jerusalem, he asked for help arranging a meeting between himself and Palestinian Authority President Mahmoud Abbas.

“I have taken steps that no other prime minister in Israel’s history has taken to advance peace,” he said. “Every minute that President Abbas refuses to accept my call for peace robs Palestinians and Israelis of the opportunity to live without fear.”

Netanyahu’s commitment to a Palestinian state, even in theory, has remained a question mark and divided observers of Israeli politics since he took office in 2009. Both his defenders and his critics point to different sets of gestures and statements he’s made that signal support for, or opposition to, a two-state solution. In the lead-up to elections 14 months ago, he dismissed the possibility of a Palestinian state on his watch.

But in a talk to North American Jewish federations last November, he said he “remain[s] committed to a vision of two states for two peoples where a demilitarized Palestinian state recognizes the Jewish state, and Israel will continue to work for peace in the hope that what is not achievable today might be achievable tomorrow.”

At the same time, Abbas repeatedly has declined another round of negotiations, saying he would only talk following Israeli good-faith measures. Before the last series of talks, in 2013, Israel released 82 Palestinian prisoners before the two sides met. Netanyahu’s defenders say Abbas’ reticence shows that the Palestinian leader remains the main obstacle to a deal.

Abbas instead has turned to international forums, including the United Nations, to recognize a Palestinian state and hold Israel accountable for what he calls violations of international law.

Most recently, Abbas endorsed a French-led initiative to convene an Israeli-Palestinian peace conference for the summer, an initiative Israel opposes.

The France initiative is just one of three factors leading Netanyahu to emphasize peace talks again, analysts say. The others include the possibility of the center-left Labor Party joining his coalition and a desire to project optimism on Israel’s Independence Day.

The French initiative calls for a regional peace conference to be held in the summer. Should negotiations fail, France has vowed to recognize a State of Palestine. Israel thus far has refused to participate, saying the statehood recognition threat gives the Palestinians no incentive to negotiate in good faith.

Netanyahu is also enmeshed in negotiations with the Knesset’s largest opposition party, Labor, which advocates a settlement building freeze and renewed peace talks. Rumors have swirled in recent days that party chairman Isaac Herzog is ready to sign on in exchange, in part, for being named Israel’s foreign minister. Herzog acknowledged the negotiations in a May 12 Facebook post, but said he was not yet ready to join the government.

“If I receive a mandate to stop the next campaign of funerals and to block the danger of an international boycott, to bring back the United States and Europe as allies, to open negotiations with regional states and to separate from the Palestinians into two states so as to stop the continual campaign of terror, then I’ll know my hands are on the steering wheel,” the post read.

Netanyahu’s peace talk may also have been prompted, analysts say, by a need to give a sort of “State of the Union” on Independence Day. While prospects for peace may be dim, Shay said, relations with the Palestinians are still of paramount importance.

“On Independence Day, the prime minister talks to the people and surveys what the situation is and what the future will hold,” Shay said. “You can’t ignore this central subject.”

Renewed negotiations have seemed remote recently. A brutal war in Gaza followed the collapse of talks in 2014. Last year saw the formation of a right-wing Israeli government, succeeded by a wave of terror that is only now fading.

“He sees a theoretical possibility but not a practical one,” said Dror Zeevi, a Middle Eastern studies professor at Hebrew University, referring to Netanyahu. “If things come together, it’s possible he would be ready for a deal, but I don’t think it’s practical in the current government.”

Those who insist Netanyahu is sincere about renewing talks point to his 2009 speech at Bar-Ilan University, where he committed to supporting a demilitarized Palestinian state alongside Israel. They note that he froze West Bank settlement growth in 2010 and freed Palestinian prisoners to jump-start negotiations in 2013 and 2014. Since taking office seven years ago, Netanyahu repeatedly has called for direct negotiations with Abbas.

“He’s ready to make concessions,” said Ephraim Inbar, director of Bar-Ilan’s Begin-Sadat Center for Strategic Studies. “Everyone knows he’ll make concessions. He was ready to freeze settlements. There are concessions he won’t make for security reasons, for historical reasons, and the nation agrees with him.”

Others point to Netanyahu’s decades-long opposition to Palestinian statehood prior to 2009. Since the building freeze, they note, Netanyahu has expanded settlements throughout the West Bank. And in March 2015, two days before Israeli elections, Netanyahu told the Israeli news website NRG that a Palestinian state would not rise while he is prime minister.

Gershon Baskin, who has acted as a conduit between the Netanyahu government and Palestinian leaders, told JTA that Abbas has thrice offered to begin secret direct talks with Netanyahu. Each time, Baskin said, Netanyahu has refused.

“The point isn’t negotiating anymore — it’s making decisions,” Baskin said. “[Netanyahu] doesn’t do anything in terms of policy to show that a two-state solution is what he wants. Nothing on the ground indicates that.”

But others insist it is Abbas offering the “Mixed Messages,” as the Washington Institute for Near East Policuy titled a recent report on the Palestinian leader and Israel.

“It is not just that Abbas and the P.A. turned their backs on any peace talks with Israel — a position they have hewed to ever since” turning to the international community for unilateral actions, wrote David Pollock, the Kaufman fellow and director of Project Fikra at The Washington Institute. “It is also that they had decided thenceforth to seek independent statehood for themselves without paying any price at all to Israel — neither the end of claims and conflict, nor a compromise on refugees, nor formal agreement on any other issue. In other words, their objective was land without peace.”

Be the first to comment on "Netanyahu keeps calling for talks with Abbas. Is he serious?"