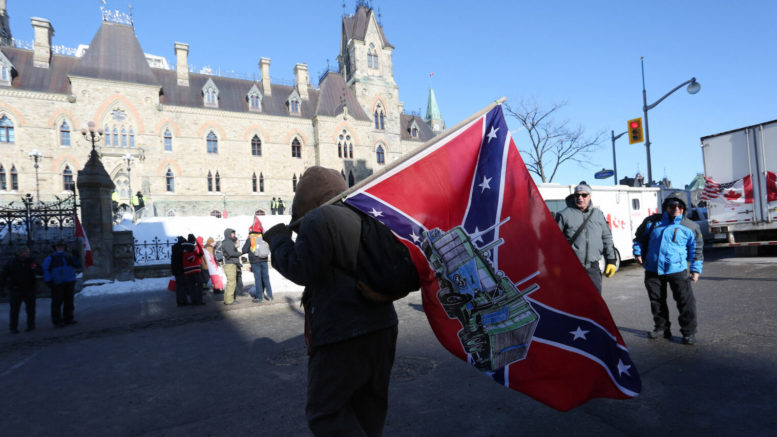 A supporter carries a Confederate flag during the "Freedom Convoy" protests against COVID-19 vaccine mandates and restrictions in front of Canadian parliament in Ottawa, Jan. 29, 2022. (Dave Chan/AFP via Getty Images)

(AJNews) — Swastikas and other symbols of hate were on display at the Canadian “Freedom Convoy” protests against vaccination mandates in Ottawa on January 29 and 30.

The protests, which were said to be organized by Canadian truckers in response to a vaccination mandate placed on truckers returning to Canada from the United States, attracted thousands to Canada’s capital. A range of groups compared vaccine mandates to fascism and displayed Canadian flags, some of them, upside down. Many signs contained profanity-filled messages for Prime Minister Justin Trudeau.

Among the symbols displayed at the protests were swastikas, yellow star of davids and, in at least one instance, the Confederate flag.

A Conservative member of parliament, Michael Cooper, MP for St. Albert – Edmonton attended the protests to show his support. While he was being interviewed by the CBC Canadian news channel, a protester with a Canadian flag covered in swastikas walked behind him.

Cooper later released a statement saying he did not know that the symbol was behind him and that if he had, he would have condemned it.

“He or she does not represent the thousands of peaceful protesters who waved Canadian flags and acted responsibly. I stand with them and will continue to fight with them,” he wrote in a statement posted to Twitter.

Edmonton Mayor Amarjeet Sohi and St. Albert Mayor Cathy Heron said they were “troubled” by the image of Cooper with protesters behind him carrying a Canadian flag defaced with a swastika.

“This type of symbolism is never okay, but it is even more troubling as we just marked the anniversary of the Holocaust and today we remember the victims who lost their lives in the hate-based Quebec City Mosque attack five years ago,” the joint statement read.

“We want the rest of the country to know that MP Cooper’s presence at this rally in no way reflects the values of Edmontonians and St. Albertans,” the mayors said. “Our communities are diverse, inclusive and welcoming, and hate has absolutely no place here.”

Coun. Knack told CTV news that Cooper should have known the type of audience it would attract — especially after looking at the rhetoric of organizers.

“An elected representative knows better,” Knack said. “They would’ve known who has been involved in organizing this.

“I think someone who is a sitting elective representative would be able to do their due diligence,” he added. “Had there been one person who happened to walk by with a flag with a swastika on it, you could say that’s a fluke. But that’s not what happened.”

“The responsibility of elected representatives is to call out the actions of and the words — like some of the ones who are organizers (of that rally) who’ve called for bullets to be used — it’s not to get into the same crowd with them.”

Journalists who reported on the protests said they were subjected to hate speech and violence themselves. One CBC reporter recalled being called a “slave blooded traitor” after asking for an interview with those organizing the protest.

Friends of Simon Wiesenthal Center (FSWC), disturbed by the appearance of Holocaust symbols at the rally issued a statement that the “use of Nazi symbols as a means to compare anything in our lives today here in Canada to the experience of Jews living under Nazi rule is a heinous form of Holocaust distortion. FSWC is also sickened by the appearance of Confederate flags and the desecration and vandalism of national monuments that was witnessed yesterday. These actions are unacceptable.”

“The swastika, yellow star or any Nazi symbol have absolutely no place at protests in Ottawa or anywhere in Canada. It’s unconscionable and an affront to the memory of each and every man, woman and child who perished during the Holocaust,” said Michael Levitt, President and CEO of FSWC.

“It is shameful that in 2022 we are still seeing these vile symbols of hate and genocide with no regard for their impact on the Jewish community and other groups victimized by the Nazis, particularly the Holocaust survivor population that suffered unfathomable pain.”

Centre for Israel and Jewish Affairs (CIJA) also commented on the “small minority that are shamefully using Nazi symbols, the Confederate flag, and misappropriating the Star of David to advance their political objectives.”

CIJA CEO Shimon Koffler Fogel stated, “Twenty-four hours after International Holocaust Remembrance Day and on The National Day of Remembrance of the Québec City Mosque Attack and Action against Islamophobia, there are Nazi flags being flown in public, in Canada, on Parliament Hill. This should be horrifying to all Canadians.

“With few exceptions, these troubling occurrences have escaped the attention of mainstream media.”

Added Andrea Freedman, CEO of the Jewish Federation of Ottawa: “The only way to get these toxic ideologies to crawl back under the rock they slipped out from is for all Canadians to roundly and unambiguously reject and condemn these symbols of hatred. The pernicious nature of antisemitism is that it morphs and becomes a convenient hook for all manner of grievance, real or imagined.”

“While we are concerned with the small group of agitators displaying the swastika, we are mortified that other protesters allowed it to continue. Good people remaining silent is a necessary precursor to evil taking root.”

Prime Minister Justin Trudeau, was quarantining over the weekend after members of his family and then he tested positive for Covid-19. On Jan. 31 he stated that “Canadians were shocked and frankly disgusted by the behavior displayed by some people protesting in our nation’s capital.”

“I want to be very clear: We are not intimidated by those who hurl insults and abuse at small business workers and steal food from the homeless,” he said. “We won’t give in to those who fly racist flags.”

With files from the Jewish Telegraph Agency