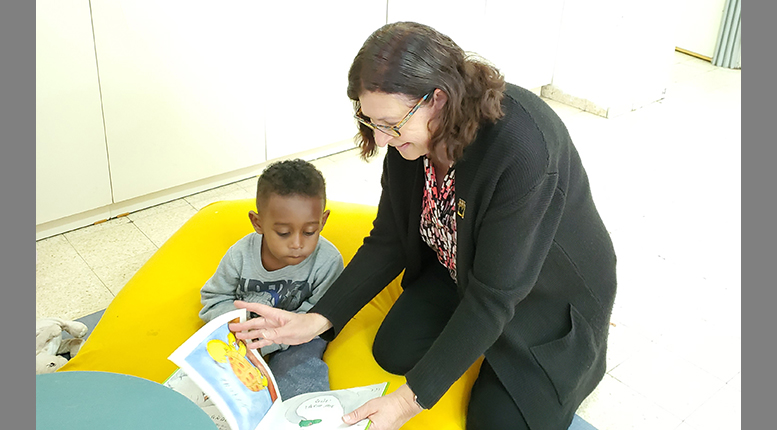 Calgary's Susan Inhaber has been elected VP of Na'amat Canada. She is pictured above reading with a child at Ramat Eliyahu Daycare in Israel. (Photo Supplied).

(AJNews) – There is much cause for celebration amongst members and supporters of Na’amat Canada in Calgary and Edmonton as they bask in the afterglow of the organization’s November election when Susan Inhaber made history, becoming the first known Albertan to ascend to the national vice presidency of Na’amat (formerly Pioneer Women). 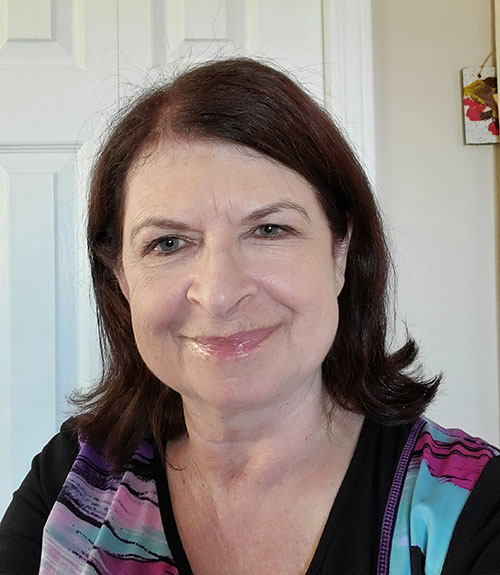 Notably, says Inhaber, Na’amat, an acronym for Nashim Ovdot U’Mitnadvot – Movement of Working Women and Volunteers – is the largest Jewish women’s organization in Israel. One of its early founders was Golda Myerson – later known as Golda Meir –  who served as secretary general of the organization and went on to become Israel’s first and only woman prime minister.

Na’amat is deeply rooted in Labour Zionism and remains a force to be reckoned with on women’s rights in Israel. Representatives of Na’amat Israel regularly liaise with Members of the Knesset, advocate for fair labour laws for Israeli women and provide leadership in the fight against domestic violence.

In approximately three years, Inhaber will ascend to the national presidency marking another important first for Alberta. Only one other Western Canadian has presided over the organization. Eva Natch, of Winnipeg, served as Na’amat Canada president during the mid-1970s.

Susan Inhaber first joined Na’amat Canada Calgary in 2000. Soon after, she took on the presidency of the Keshet Hatikvah chapter. Following the merger of Keshet Hatikvah with Ariel chapter, Inhaber became president of the successor Yachad chapter.

As chapter president, Inhaber began attending national board meetings as Calgary representative. In 2011, she became a member-at-large on the national board. She has been there ever since, spending the last term chairing the national education committee.

In addition to other responsibilities as national VP, Inhaber currently serves as the national chair of membership engagement and leadership development. One of her biggest priorities is to grow the organization. As has been the case with other Jewish membership organizations, Na’amat numbers have dwindled in recent years. Inhaber says that national membership is approximately 400 with the majority of members residing in the East. The organization once boasted a national membership of at least 400,000, according to archives at the Jewish Historical Society of Southern Alberta.

At 18 or 19 members, the Calgary chapter – currently presided over by veteran Na’amat volunteer Stephanie Sacks – is small but mighty. Recognizing that the future of the organization relies upon the engagement of young women, Sacks – a previous Na’amat Calgary president – has made significant efforts over recent years to appeal to that demographic and further plans are afoot, Inhaber said.

“We’ve never had a VP or president from Alberta,” Bushewsky said.

“We are excited for the future of Na’amat.  Both Susan and Sandi have a vision during this time of change.”

Pioneer Women programs in Edmonton include Hamentaschen for Seniors and financial support for seniors’ programs provided by Jewish Family Service and the Jewish Drop-In Centre. Na’amat Edmonton participates in the Basically Babies program, providing donations of baby items, financial support and hands-on volunteering in support of mothers in need who are referred by a variety of local social services organizations. A much-loved tradition within the Jewish community is Na’amat Edmonton’s annual Sukkah Hop.

According to Bushewsky, there are approximately 35 Na’amat members in Edmonton. Long-time Na’amat Edmonton stalwart Beryl Nahornick believes that at the organization’s height, Na’amat membership in Edmonton may have been as high as 150. Nahornick, who once represented the Edmonton Na’amat Council at national board meetings, was effusive in her praise of Susan Inhaber.

“She is great. . . She did a program at the Western Leadership conference that gave me naches,” Nahornick said.

A nice synergy has been developing between Na’amat Calgary and Na’amat Edmonton, aided in large part by the need of both organizations to pivot to online activities in the wake of the COVID-19 pandemic. This has blurred borders somewhat, easing endeavours such as a Western Leadership Seminar that took place via Zoom last month, bringing Na’amat members in Vancouver, Edmonton, and Calgary together in shared activities.

Na’amat supports an astonishing number of projects in Israel, including the Shalom Day Care in Jaffa – one of 200 Na’amat sponsored day cares in the country. True to its name, the facility cares for both Arab and Jewish children, says Inhaber. Students learn in both Hebrew and Arabic and their holidays are equally observed.

PJs to PJs programs in 24 multi-purpose Na’amat daycares means that parents who are having difficulty coping with parenting can bring their children in their pyjamas during the early morning and pick them up the same way in the evening, knowing that they will be clothed, fed, nurtured and changed back into their pyjamas in time for pickup and bedtime. The multi-purpose centres provide additional supports for parents who are struggling, including the provision of counselling and even take-away meals.

In celebration of her most recent birthday, Inhaber raised funds via Facebook for one of her favourite projects, Ramat Eliyahu in Rishon L’Tzion. A former teacher, Inhaber has a passion for literacy, so she purchased books that could be shared with mainly Ethiopian families, helping to make reading to their youngsters part of their daily routine.

Inhaber has been to Israel four times with Na’amat, each time gaining more insight into the projects supported by Na’amat members in Alberta and across Canada. Examples include the Glickman Centre for the Prevention of Domestic Violence in Israel, the Kanot Youth Village, legal counselling centres, and 17 technological high schools, eight of which serve Arab villages.

According to Inhaber, every three years, Na’amat Canada establishes major capital campaigns in support of worthwhile projects. The 2020-2023 priorities include the Abba Project which is increasing counselling for men in order to improve the situations of families living with domestic violence. Another priority is the addition of new space at the Kanot Youth Village so that the facility, which previously provided only high school classes, can serve students in grades seven through nine.

Supporting such ambitious projects requires significant funds. Calgary and Edmonton Na’amat members have repeatedly risen to the occasion through luncheons, teas, dinners, special events and casinos which – under pre-COVID conditions – were staffed by qualifying charitable organizations every 18 months. Following Na’amat Edmonton’s lead, Inhaber was the inaugural casino chair in Calgary.

For the past 23 years, Na’amat Calgary has been engaged in the highly successful School Supplies for Kids program, an initiative through which donors and Na’amat volunteers team up to provide badly needed school supplies for more than 1,000 kids in Calgary area domestic violence shelters. Since its inception in Calgary, the project has been picked up by other Na’amat chapters across Canada, including those in Edmonton. The very popular Na’amat Bingo, which was held annually between 1992 and 2009 was one of Jewish Calgary’s most eagerly anticipated annual social events.

In her capacity as national vice president, Susan Inhaber has some ambitious goals. She is seeking to increase Na’amat’s membership across the country and will work toward restoring the organization’s prominence in Winnipeg while starting chapters in both Saskatchewan and Atlantic Canada. Other plans include growing the donor base and increasing overall exposure to the impressive work done by Na’amat both in Canada and in Israel.

“I’m blown away by the dedication of Na’amat members,” says Inhaber. “I’ve learned so much by becoming part of the leadership.”

Inhaber says she is particularly moved as she meets Na’amat veterans in their 70s, 80s and 90s who remain active in the organization. She fondly recalls meeting one woman, now over 100 years of age, who attended a mission in Israel at the age of 90.

“Their power and strength is just amazing,” marvels Inhaber.  “So is everything they’ve accomplished.”

Inhaber, who already has significant accomplishments under her belt, is looking forward to being a part of new synergies within the world of Na’amat, including an upcoming virtual Scholarship Gala jointly hosted by Na’amat Canada and Na’amat USA featuring the iconic Dr. Ruth. The 92 year-old Holocaust survivor and sex therapist became a celebrity in the 1980s with the launch of her radio show Sexually Speaking. The Zoom event takes place on Sunday, March 7 when the diminutive yet larger-than-life Dr. Ruth Westheimer will speak, in part, on education and empowerment of women.

Na’amat (formerly Pioneer Women) is the current name of the Labour Zionist women’s organization that began in Israel in 1921 as the Moetzet Hapoalot (Council of Working Women).

Pioneer Women was first established in Canada in 1925 shortly after its North American founding in New York City.

The first chapter of Pioneer Women in Edmonton – named for Esther Kramer – was established in Edmonton in 1931.  According to documents in the archives of the Jewish Archives and Historical Society of Edmonton and Southern Alberta (JAHSENA) members of the chapter were inspired by Golda Myerson (Golda Meir) with whom they met when she visited Edmonton in 1936.

In its May 25, 1934 issue, the Calgary Herald reported that Mrs. J Joffe [Ruth Joffe] was elected president of the “Palestine Pioneer Women’s Organization.”  Other archives at the Jewish Historical Society of Southern Alberta (JHSSA) refer to Tillie Shulman and Betty Dvorkin as the Calgary founders of Pioneer Women in 1936 when Golda Myerson is also believed to have visited Calgary, inspiring local women.

In 1976, the organization was rebranded in Israel and the diaspora as Na’amat.

Na’amat chapters are currently active in Israel, Canada, the United States, Mexico, Brazil, Argentina, Peru, Uruguay and Belgium. In 2015, a solidarity mission to Israel brought three busloads of women together representing most of these countries. Na’amat Chapters once also existed in England, France, Australia, Chile and Colombia.  According to newly-minted Na’amat Canada Vice President Susan Inhaber, the organization continues its efforts toward increased international connections.

Be the first to comment on "Na’amat Canada elects Vice President from Calgary: Susan Inhaber"