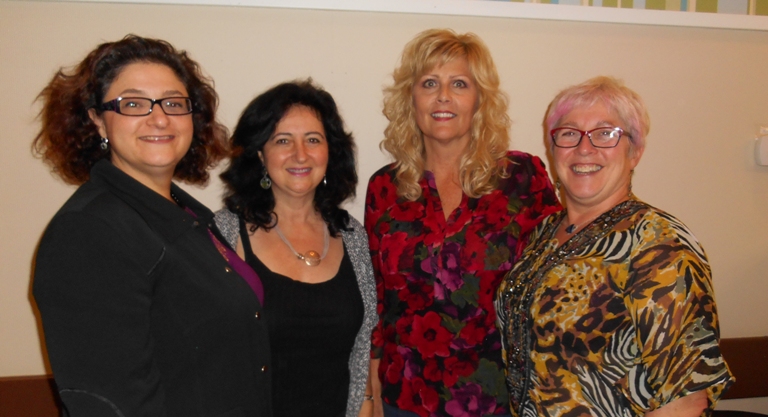 (Edmonton) – In celebration of the 90th Anniversary year of Na’amat Canada, we present the final set of interviews in our series: Founding members of Tikvah Chapter. Gail Milner, Reisa Segal, Anita Ovics and Brenda Nahornick founded the Tikvah chapter in 1989.  I sat down to interview 3 of these women about their experience. Click here to view Part 1 and here to view Part 2 of the series.

Gail Milner says she really wanted to form a group because her mother (Helen Markovitch) had been a member and she used to take Gail to the Mother’s Day events.  Gail was newly married and getting a chapter together was a great way to meet other young women socially and to get involved with Na’amat.  Once they started having their own families, the young women loved having a monthly night out and leaving the kids at home with the husbands!

She was the first President co-chairing with Brenda Nahornick in 1989, and  in 2010 – 2012 she became President a second time.  Gail has held many positions including Membership Chair for her Chapter.  She fondly remembers being part of  Council along with Esther Kauffman, z”l, for many years.  She was “Mother of the Year” at one of the Mother’s Day Teas, and chaired Programming.  She adds that she spent hours on the phone frequently, reminding people about meetings and following up with those that hadn’t attended the last one. 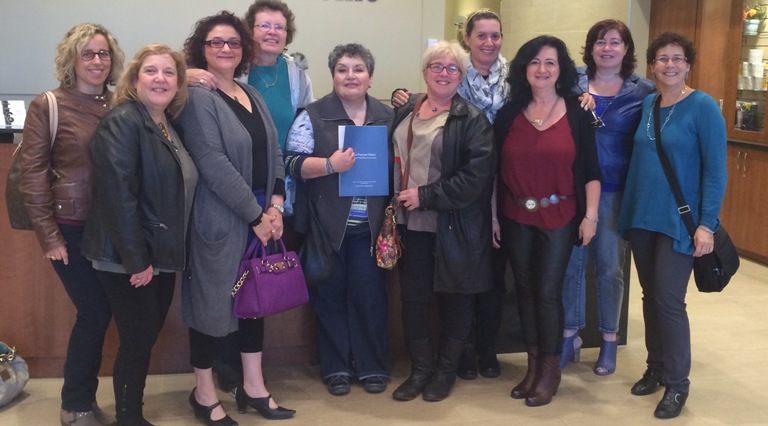 Some of the vibrant members of Edmonton Na’amat Tikvah Chapter visiting OPH.

Gail recalls the first meeting was at her own home.  Bernice Milner was the fledgling Chapter’s advisor, and Myra Kacew, who was Council President at the time, was very helpful in assisting the young women to get started.  There were generally guest speakers at the monthly meetings, and fund raising events included a car rally, a silent auction, a scavenger hunt and a garage sale in the early years.

More recently the Chapter has undertaken to canvass for Passover Greetings with Edmonton Jewish News annually and have summer garage sales.  One lucrative fundraiser was joining forces with the Aviv Dancers for a performance at the Arts Barns where Tikvah had a massive silent auction.  Almost all the members and their spouses attend the annual Channukah Party, which is always fun.  The Chapter members get together to make mishlach manot at Purim for the seniors at the residence of Darlene Bushewsky or Renee Raff and then distribute it.

Gail has made wonderful friends within Na’amat and loves the concept of helping women and children in Edmonton and in Israel through the good work of the organization.  She enjoys being a part of it and had the opportunity of going to Israel two years ago for the Na’amat Leadership, touring the daycares and schools that Na’amat sponsors.  A major highlight of the trip was actually seeing the plaque that recognized the Edmonton Tikvah Chapter at the Kanot Agricultural School that had been renovated with donations from Tikvah funds.

Gail concluded her interview by adding that she has always found Na’amat to be welcoming to new members and always down to earth, non-judgmental and very open.

Anita Ovics says she was “recruited” by Gail for the very first meeting.  That meeting was a Gail’s house and it was actually very well attended.

Anita’s best memory was an adventure in Toronto at a National Convention.  She was sharing an upper floor hotel room with Gail when the fire alarm went off around 2 a.m. one night.  The young women grabbed their coats and proceeded to go down the staircase but before they got half-way down it turned out to be a false alarm so they were able to climb back up and return to their room.

One memorable program was learning to make sushi in a workshop at the home of Michelle Helm.  It was a lot of fun.

With regard to fundraising, Anita feels the car rallies were always the most fun along with the silent auctions.

Anita likes the whole idea that Na’amat raises funds to help women in need and helping children in Israel, and in Edmonton.  She says she always felt comfortable within her chapter, and with being a member of Na’amat – the friendliest group of women.

Reisa Segal, a member since inception in l989, has held almost every role in the Tikvah Chapter.  She was President several times, the last time being l999.  She has been Treasurer, Program Chair and Recording Secretary.

Reisa recalls the Mother’s Day Tea was always a major highlight, getting together with the other Na’amat chapter ladies, doing fashion shows, and participating in helping organize the Women of Valour Gala a few years ago, which was a great learning experience.  She was also nominated for “Mother of the Year” special recognition for over and above contribution to her Chapter and was presented with a plaque in the downtown party room where Sid and Doreen Adler lived.

“Being a member means being involved with a group of like-minded women you can count on for socialization and social action,” explains Reisa, adding she has always been intrigued by the fact that Na’amat is the only Jewish organization recognized by the Government of Israel, which involves Na’amat in their social action governance.  This was strongly brought home by guest speakers at a weekend retreat held at the Tim Horton’s Ranch in Kananaskis jointly with Na’amat Calgary.

The current Na’amat Canada Edmonton President, Darlene Bushewsky, notes Tikvah is thus far the younger group of Na’amat Edmonton. She strongly believes there is an opportunity within our organization for younger women who would want to get together and also support Israel. There are younger chapters across Canada and with today’s technology, connecting with like-minded women across the country is only a click away.  A new chapter could be started with just a few friends getting together for a common cause.

Be the first to comment on "Na’amat Canada Edmonton: Tikvah Chapter carries the torch – Part 3"