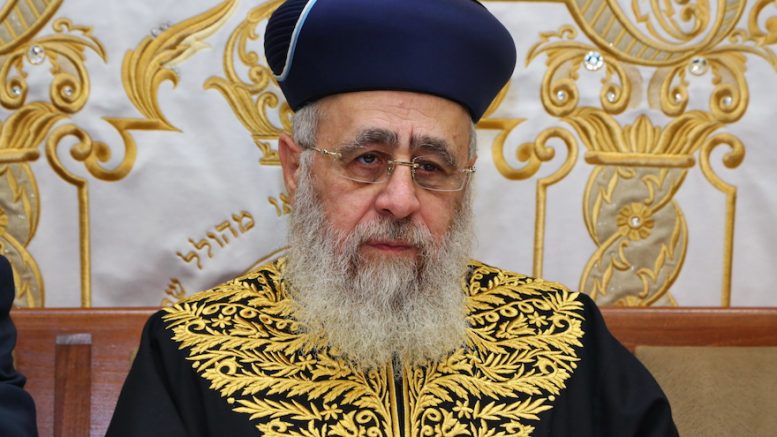 (Jerusalem, October 13) — In the first event of its kind, top Israeli Jewish and Palestinian Muslim religious leaders – including one of Israel’s chief rabbis and the religious affairs advisor to Palestinian President Mahmoud Abbas, Israel’s Sephardic Chief Rabbi and leaders of a prominent West Bank yeshiva — met with Israeli President Reuven Rivlin to promote peace and affirm their opposition to all forms of religiously inspired violence.

“G-d created life and commanded life. Therefore, we denounce the killing of innocents or any kind of aggression against the other,” read a statement on behalf of the participants in this initiative issued at the meeting.

“We believe the deliberate killing of or attempt to kill innocents is terrorism, whether it is committed by Muslims, Jews or others. In this spirit, we encourage all our people to work for a just peace, mutual respect for human life and for the status quo on the holy sites, and the eradication of religious hatred.”

“The meeting today is important and significant – perhaps the most important meeting that could be held during these days,” said President Rivlin.  “We all know that the tensions between Jews and Muslims are difficult and specifically for that reason we insist on meeting together here today. We must not allow this land to once again witness a sacrifice of blood senselessly spilled.”

The summit was the result of a year-long Washington Institute initiative led by two of its scholars – Ziegler Distinguished Fellow David Makovsky and Kaufman Fellow David Pollock – who devoted dozens of hours in private talks to bring this group together.

“Having Jewish and Muslim leaders from Israel and the Palestinian Authority join together at the home of the president of Israel sends a powerful message of peace at a critical and sensitive moment,” said Makovsky and Pollock. “Over the last year we have seen a rise in tensions between Israelis and Palestinians that has led to grave consequences. Since much of the violence of the last year has been religiously motivated, we believed it was vital for religious leaders to speak out. One should never assume one meeting alone can be transformative, but it could provide an important foundation to build upon.”

With the help of the Center for Middle East Development at UCLA, in early 2016 the Institute brought together Sheikh Habbash, the Palestinian Authority’s former religious affairs minister, and Rabbi Moshe Lichtenstein, head of Yeshivat Har Etzion in the West Bank town of Gush Etzion, to discuss the role of religious leaders in conflict mitigation. In subsequent rounds of talks, each side brought three additional religious leaders. Participants began to understand each other’s perspective on the conflict, how each views its own religious narrative, and the importance of religious leaders speaking out against religiously inspired violence and promoting tolerance and peace.

“We hope that this initiative will create an ongoing mechanism for Israeli and Palestinian clerical leadership to communicate with each other and to work in concert to reduce tensions,” said Institute Executive Director Robert Satloff. “In some small way, this initiative underscores the powerful idea that religion can serve as a basis for coexistence, not just an excuse for conflict.”
The Jerusalem meeting was the first time Rabbi Yosef and Sheikh Habbash had ever met. As far as far as can be determined, it was also the first time Israeli Jewish and Palestinian Muslim religious leaders had ever met face-to-face, outside of a broader interfaith meeting.
Participants included:

• Rabbi Shlomo Brin, head of Yeshivat Har Etzion for first-year students
• Sheikh Mahmoud Habbash, Supreme Sharia Court Judge and religious and Islamic affairs advisor to Palestinian President Mahmoud Abbas
• Rabbi Moshe Lichtenstein, head of Yeshivat Har Etzion in Gush Etzion
• Rabbi Daniel Tropper, founder and president emeritus of the Gesher organization
• Rabbi Yitzhak Yosef, Sephardic chief rabbi of Israel
About the Washington Institute: The Washington Institute is an independent, nonpartisan research institution funded exclusively by U.S. citizens that seeks to advance a balanced and realistic understanding of American interests in the Middle East and to promote the policies that secure them. Drawing on the research of its fellows and the experience of its policy practitioners, the Institute promotes informed debate and scholarly research on U.S. policy in the region.