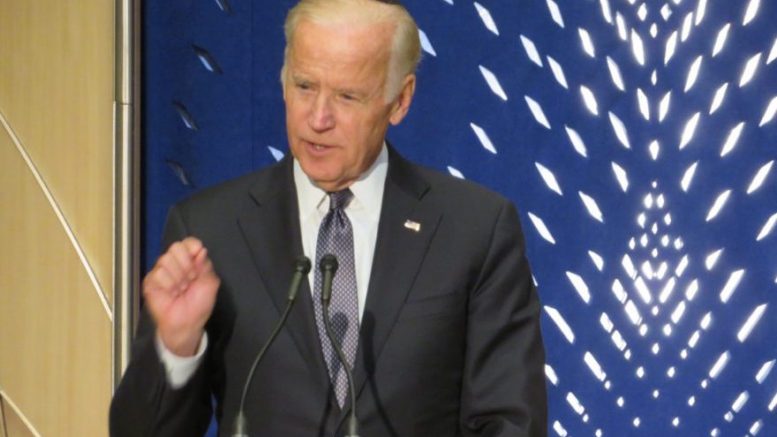 WASHINGTON (JTA) — Vice President Joe Biden said Shimon Peres’ legacy should be one of tolerance at a time of rising bigotry.

“At a time when the currents of bigotry and anger and isolationism are on the rise, when too many are quick to cast blame on the outsider, on the other, and the promise of peace might seem like a distant dream, it’s my hope, my sincere hope, that each of us continues to hold Shimon’s memory very close,” Biden said Thursday October 6, 2016 at a memorial service held at Adas Israel, a synagogue in Washington, D.C.

Top Obama administration officials, including President Barack Obama and his wife, Michelle, along with others, have seized opportunities in recent weeks to express fears of the possibility of a Donald Trump presidency in veiled – and sometimes not so veiled – references to bigotry.

The Republican presidential nominee’s campaign has been marked by broadsides against Muslims, Mexicans and others, and he has advocated a retreat from U.S. military engagement overseas.

Biden noted with amazement Peres telling him earlier this year that he still hoped both peoples — Arabs and Israelis — would emerge as “winning” the conflict through peaceful coexistence.

“In all of us who continue to hear his voice in our ears, that deliberate irresistible rumble urging us on; ‘Dream big,’ he implores us still, ‘make the world a better place’,” the vice president said.

Obama and former President Bill Clinton delivered eulogies last week at the funeral in Jerusalem for the former Israeli president and prime minister. But Biden is the administration figure known for the closest ties to Israel and the pro-Israel community.

He spoke of his friendship with Peres dating back nearly 45 years, when Biden was elected senator from Delaware, and of their shared love of poetry. Peres would tease Biden about his love for Irish poets, said Biden, who is of Irish Catholic heritage. Biden would rejoin that Peres was mistaken, his preference was not for Irish poets but for the “best poets.”

A love of poetry, Biden said, was one thing the Irish and Jews shared; the other was guilt.

Biden also spoke pointedly of Peres as a founder of Israel, casting the Jewish state as “the only guarantor” of Jewish survival.

“I learned a long time ago when I said I am a Zionist and was criticized for it that you don’t have to be a Jew to be a Zionist,” he said.

Biden mentioned Peres’ advocacy of the two-state solution, but unlike Obama, did not make it a centerpiece of his eulogy – a decision that was seen by some as the president’s implied rebuke to Benjamin Netanyahu, the Israeli prime minister, whose government is overwhelmingly against establishing a Palestinian state.

Instead, Biden spoke of Peres’ dream of peace in broader terms.

Other speakers included Madeleine Albright, the former secretary of state, and Peres’ son Chemi, who delivered a recorded message.

Like his father, Chemi Peres made clear that he saw Obama as a friend of his country, a pointed reference in a week when the Netanyahu and Obama governments are once again at odds over Israel’s settlement plans.

“I want to thank President Obama for leading such a distinguished delegation to the funeral and for his moving eulogy,” Chemi Peres said, and also thanked Clinton. “Both are outstanding presidents and great friends of my father — and even more so of the State of Israel.”

Be the first to comment on "Biden, remembering Peres, pleads for triumph of tolerance over bigotry"