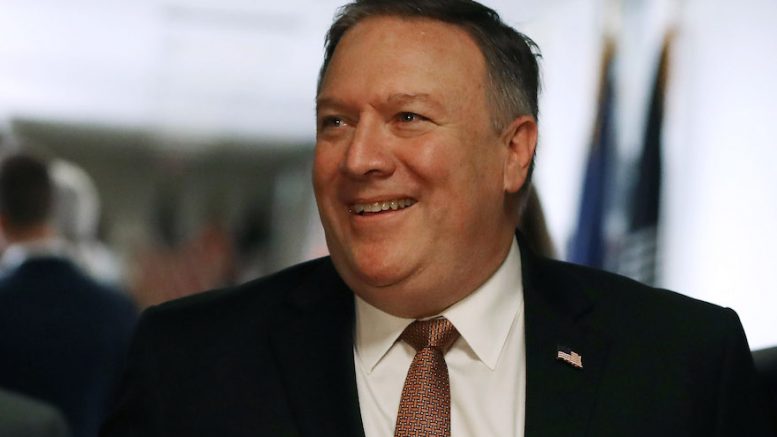 WASHINGTON (JTA) — The U.S. Senate handily confirmed CIA director Mike Pompeo as secretary of state as reports said one of his first tours in the job would be to Israel.

The 57-42 vote on April 26 was stronger than expected for Pompeo. Democrats had robustly opposed his nomination over remarks Pompeo made as a Kansas congressman that appeared to generalize about Muslims and terrorism, as well as his hawkish position on Iran, which closely mirrors that of President Donald Trump.

A number of liberal Jewish groups, including the American Jewish World Service, the National Council of Jewish Women and J Street, had joined calls on the Senate to reject Pompeo. The Anti-Defamation League stopped short of opposing his nomination but said senators should ask him tough questions about his past comments.

“This is a sad and dangerous day for US security and standing in the world,” J Street said in a statement.

ADL in a statement welcomed the appointment but urged Pompeo to keep promises he made during confirmation hearings, “including his pledge to manage affairs of state fairly and equally, defending the human rights and dignity of every US citizen and State Department employee, and his assurances about the importance of U.S.-Israel relations, denying nuclear weapons to Iran, and promoting Middle East Peace.”

The American Jewish Committee, which took no position on Pompeo during the hearings, congratulated him, and in its statement appealed to him to uphold an expansive vision of American influence — notable because Jewish organizations have been concerned by what they see as Trump’s retreat from the international stage.

“AJC is deeply committed to U.S. leadership in international affairs,” its statement said. “We share your belief, as you stated in your confirmation hearing two weeks ago, in diplomacy that promotes “America’s ideals, values, and priorities.”

Israeli media reports said that Pompeo would visit the country as early as next week.

Both the ADL and the AJC urged Pompeo to act quickly to name a special envoy to monitor and combat anti-Semitism. Pompeo’s predecessor, Rex Tillerson, never filled the congressionally mandated job and it has been empty since the launch of the Trump administration.

Hawkish pro-Israel groups backed Pompeo, noting his tough postures on Iran as CIA director and as a Republican congressman. Trump’s naming in recent weeks of Pompeo and of John Bolton as his national security adviser are seen as signals that he plans to scrap the 2015 Iran nuclear deal when it comes up for renewal on May 12.

Among the pro-Israel groups backing Pompeo were the Zionist Organization of America and Christians United for Israel, which urged its millions of members to blast congressional offices calling for his confirmation.

“When a large, committed group of Americans stands together and speaks with one unequivocal voice, our leaders listen,” CUFI founder and chairman Pastor John Hagee said in a statement.

Be the first to comment on "Mike Pompeo confirmed as secretary of state, reportedly going to Israel early on"