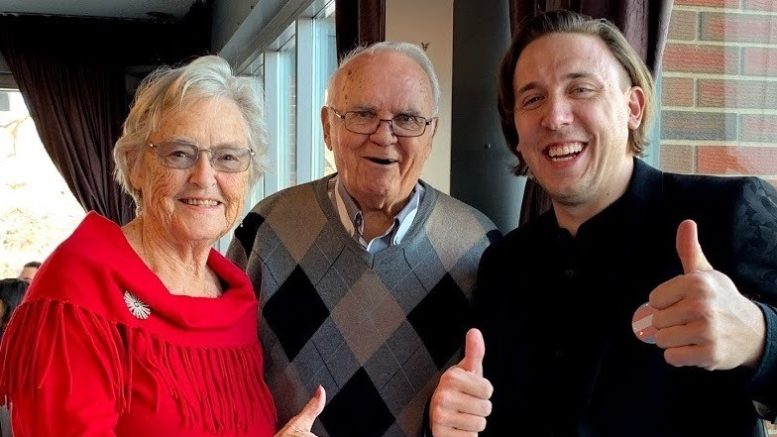 (AJNews) – Yasher Koach to Kory Mathewson (Edmonton Talmud Torah alum) and his brothers Kyle and Keyfer (also Talmud Torah alumni) for discovering a flaw with the Alberta Government’s electronic form for 75-year-olds + to book vaccination appointments in Alberta – and for fixing it. And thank you for then making the fix available to everyone.

The AHS sign up system for COVID vaccinations for people born in 1946 or earlier, was released on Feb. 24. It immediately flooded and jammed, and resulted in hours of frustration  and stress for thousands of seniors and their family members who were trying to book appointments.

Luckily, one of the people attempting to sign up was  Kyle Mathewson, trying to book the lifesaving vaccination for his  grandparents.  Kyle, who has a Ph.D in Cognitive Neuroscience recognized that there must be a problem with the AHS software and contacted his brother in Montreal – Kory Mathewson – who has a Ph.D. in Computing Science and his brother Keyfer Mathweson, who is a Software Engineer in Ottawa, and described the problem to them.

Kory, a research scientist with Deep Minds A1, said he looked at the form and the hair on the back of his neck stood up. He tweeted, “I thinks to myself, hmm I wonder which part of the tool is slow.”

Alright, he said to himself, “let’s try opening the form and seeing if I can book this life saving vaccine for my nearly ancient grandparents. That would be good, right?  Try to help them live as long and happy as possible?”

Kory found that a broken barker was the source of the problem.

He tweeted – “Well there seems to be a CSS class called .startHidden (much like the virus)…but I can find it and track it down, thank you to the fact that (when I was a kid) my grandparents bought me a computer and let me play videogames and use the internet.”

Within minutes, the brothers determined the fix, tested it and were able to book their grandparents for a COVID vaccination.

That is amazing in itself but the story gets better!

They then sent easy to follow directions out on twitter so that thousands of others could do the same, and like magic, people were able to book their appointments.

Kory received a flood of “likes”and thank you’s from appreciative seniors and their families – many of them describing the frustration they had been feeling with the AHS form and the relief they felt with being able to get an appointment for the vaccination.

“I feel uplifted by the whole Twitter community that was able to jump on board and make this happen,” said Kory. “All the credit doesn’t go to me, it goes to them and it goes to my older brother and my younger brother.”

He tweeted, “Thank you to Kyle for raising the alarm on this one and to Keyfer for being the best developer, advocate and manager that I know. Now, get that vaccine gran and gramps and let’s hug again.”

Kol Hakavod to the Mathewson brothers!

Listen to this awesome interview with Ryan Jesperson that describes  the scope of the problem and how it was impacting seniors aged 75+ and their families and how very appreciative people are to the Mathewson Brothers.