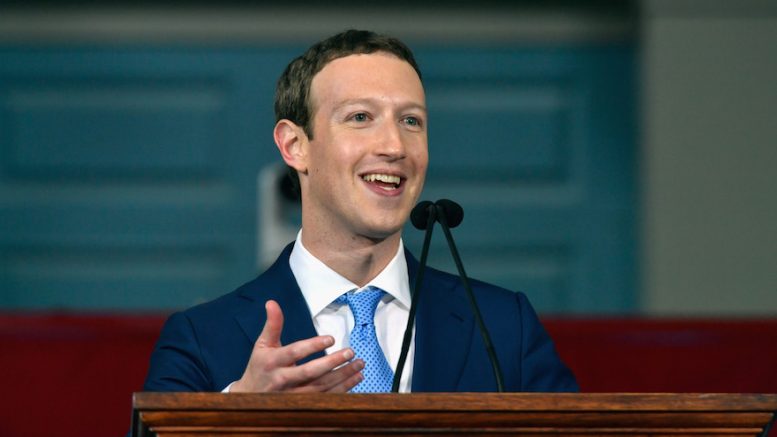 Mark Zuckerberg delivering a commencement speech at Harvard University in which he quoted the Mi Shebeirach prayer, May 25, 2017. (Paul Marotta/Getty Images)

(JTA) — Mark Zuckerberg wrote last December on Facebook that for him, “religion is very important.” Looks like he meant it.

The Facebook co-founder has been invoking Judaism a lot lately. In May, he quoted a Jewish prayer at Harvard’s commencement. Two weeks ago he posted a picture of his daughter with a family kiddush cup. And on Saturday night, he posted a public apology at the end of Yom Kippur.

It’s quite a transformation for a public figure who once defined himself as an atheist.

Although he was a member of the Jewish fraternity AEPi before he dropped out of Harvard, Zuckerberg didn’t discuss his Judaism much before 2015. Replying to a comment last year, Zuckerberg wrote that he “went through a period where I questioned things, but now I believe religion is very important.”

Zuckerberg’s recent string of Jewish affirmations began nearly two years ago following then-presidential candidate Donald Trump’s call for a ban on Muslims entering the United States. Being raised as a Jew, Zuckerberg wrote, made him sensitive to attacks on all minorities.

“After the Paris attacks and hate this week, I can only imagine the fear Muslims feel that they will be persecuted for the actions of others,” Zuckerberg wrote, referring to that year’s terror attack in the French capital. “As a Jew, my parents taught me that we must stand up against attacks on all communities. Even if an attack isn’t against you today, in time attacks on freedom for anyone will hurt everyone.”

Zuckerberg invoked his Judaism again after the August white supremacist rally in Charlottesville.

“It’s a disgrace that we still need to say that neo-Nazis and white supremacists are wrong — as if this is somehow not obvious,” he wrote.

But judging from his Facebook profile (and in his case, shouldn’t we?), Zuckerberg has reconnected with his Judaism not just as a national figure but as a person and a father. His post featuring a collage of a kiddush cup, Shabbat candlesticks and homemade challah waxed about passing the cup from generation to generation.

“For shabbat tonight, we gave Max a kiddush cup that has been in our family for almost 100 years,” he wrote, referring to his eldest daughter. “Her great-great-grandfather Max got it after our family immigrated here and it has been passed down through our family ever since.”

At the Harvard commencement, Zuckerberg told graduates that he sings an adaptation of the Mi Shebeirach — the traditional Jewish prayer for the sick — when he tucks her in at night.

While the mogul’s newfound piety may be attracting attention, he is doing what any young Jewish parent might, said Rabbi Brad Hirschfield, director of CLAL-the National Jewish Center for Learning and Leadership. Plenty of Jews lose interest in their religion, then reconnect to it after having kids.

“There are a million people in his age cohort who are deeply proud of being Jewish and are trying to figure out what it means,” Hirschfield said. “You marry and partner and have a family, and it’s not surprising that the questions of ‘How do I have a more meaningful life and build a better future’ become more important and powerful and imminent.”

InterfaithFamily.com was especially pleased that Zuckerberg, whose wife, Priscilla Chan, is not Jewish, has posted about his family’s Jewish rituals.

“The fact that such a super-influential couple clearly are making Jewish choices for their family is the best news with which to start the new year,” wrote Ed Case, founder of InterfaithFamily.com. “Mark Zuckerberg and Priscilla Chan could really change the course of Jewish history if they got involved in efforts to engage interfaith families in Jewish life.”

Zuckerberg got Jewishly personal again when he asked for forgiveness at the end of Yom Kippur, the Jewish day of repentance. His critics might say he has a lot to atone for.

During the 2016 presidential campaign, Facebook was accused of allowing Russian hackers to post thousands of ads influencing the election. And users also were allowed to target ads based on phrases like “Jew hater” and “how to burn Jews.” (Facebook COO Sheryl Sandberg, who also is Jewish, said the company would address the problem.)

It isn’t the first time that Zuckerberg has encountered trouble because of the content published on his site. In 2015, some 20,000 Israelis filed a class-action lawsuit against Facebook for ignoring incitement to terrorism on the network and enabling terrorists to find sympathizers. The case was dismissed this year.

While Zuckerberg may not have always talked publicly about his Judaism, he has surrounded himself with people who do. His college roommate moved to Israel and became a Conservative rabbi. Sandberg has spoken frequently about how Jewish rituals helped her cope following her husband’s untimely death in 2015. And his sister, Randi, is open about her Jewish observances. She says her family unplugs for a “digital Shabbat” each weekend, and sang “Jerusalem of Gold,” a classic Israeli song, at the Davos World Economic Forum.

Davos also occasioned the first JTA clip about Zuckerberg, published in 2008. While he attended the forum that year, Israel’s delegation invited him to visit the country.

He has yet to accept. But after giving his daughter a kiddush cup and atoning on Yom Kippur, maybe this is the year.