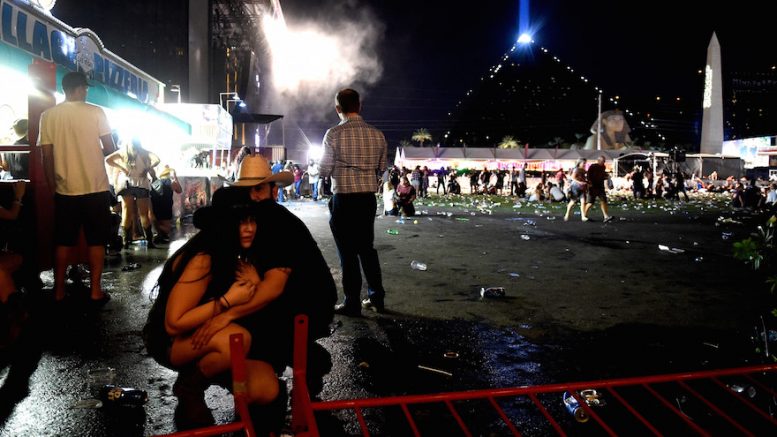 (JTA) — Jewish groups responded to the mass shooting in Las Vegas by condemning the violence and calling for gun control legislation.

At least 58 people are dead and more than 500 wounded in the attack at a country music festival outside the Mandalay Bay Resort and Casino on the Strip late Sunday night. It is the deadliest mass shooting in U.S. history.

The Anti-Defamation League, B’nai B’rith International, the National Council of Jewish Women and the Reform movement were among the groups that called for tougher gun control laws in the attack’s aftermath.

“While we are still learning details and do not know the impetus for the killings, one thing is clear: the threat of mass violence against innocent civilians in America has not abated. This threat must be taken seriously,” Anti-Defamation League National Director Jonathan Greenblatt said in a statement. He called for the enactment of “tough, effective gun violence prevention measures.”

Greenblatt said its Center on Extremism is investigating the background and activity of shooter Stephen Paddock and whether he may have ties to extremists or was motivated by any extremist ideology.

B’nai B’rith International said it is “well past time for meaningful, bipartisan gun violence legislation in this country.” It also said: “Though information about the shooter and his arsenal is still being uncovered, we have long held there is no acceptable, reasonable need for civilians to have access to large rounds of ammunition.”

“B’nai B’rith stands in solidarity with the Las Vegas community and with all those impacted by gun violence around the nation,” the statement also said.

National Council of Jewish Women CEO Nancy Kaufman in a statement called for Congress to act to “stem the tide of this senseless violence before yesterday’s tragedy becomes just another record to be broken.”

“Federal lawmakers must act now to restrict access to automatic weapons, reject the current bill before Congress that would make it easier to buy silencers, and instead focus on how to make our communities and our country safer. NCJW expects nothing less from our elected officials,” the statement also said.

Rabbi Rick Jacobs, president of the Union for Reform Judaism, said the mass shooting cannot be termed a random act of violence.

“Even before all the facts are known we know this: rather than revere gun rights our country must finally revere human life,” he said.

“We mourn those callously slaughtered in Las Vegas and pray for the wounded. But our prayers must be followed by action, long overdue limits to the easy access to fire arms.”

The Jewish Federations of North America in its statement called on people wherever they are to donate blood.

“These attacks are just the latest instances of senseless violence that terrorizes innocent people everywhere and must come to an end,” the group said.

“On behalf of world Jewry, I condemn this horrific criminal act,” he said in a statement.

David Bernstein, president of the Jewish Council for Public Affairs, said that while authorities have not determined whether the shooting was an act of terror, “there is no question that it has terrorized and traumatized hundreds of innocent people.”

Cheryl Fishbein, the JCPA’s chair, added: “It is imperative that we come together to address the underlying causes in the days ahead.”

There are over 70,000 Jews and at least 19 synagogues in Las Vegas, according to the JewishVegas.com website.