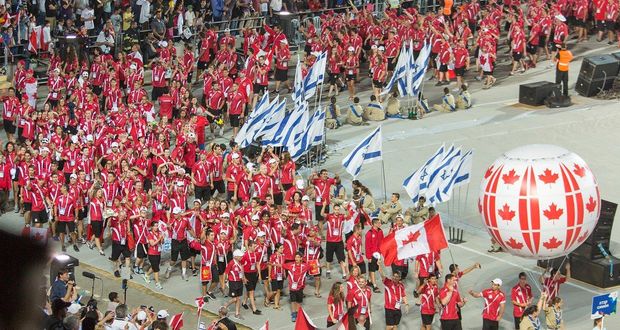 A record 10,000 athletes will be competing at the 20th Maccabiah Games, the so-called Jewish Olympics. The athletes in the 43 sports represented at this year’s games come from 80 countries including Canada. (Photo by Maccabi Canada)

JERUSALEM (JTA) — Thousands of athletes and spectators who came to celebrate the opening of the 20th Maccabiah Games in Jerusalem got to revel in another rite — the Jewish wedding of a Canadian hockey player.

Some 10,000 athletes from 80 countries marched behind their flags on Thursday night into Teddy Stadium – ranging from one member of the Dominican Republic team to the 1,161 members of the delegation from the United States, and the two members of the Barbados delegation to the 2,400 members of the Israeli delegation.

“You are proud citizens of your countries, but remember this is your country, too,” Netanyahu told them.

In addition to the singing and dancing celebrating the games as well as the diversity of Israel, the opening ceremony included Canada’s Avi Steinberg proposing on stage to his girlfriend, Rachel, who had recently completed her conversion to Judaism. After she accepted, the hosts of the opening ceremony pulled out a wedding gown and huppah, and the couple’s rabbi from Canada officiated at a ceremony in front of the beaming athletes and spectators.

Anthony Ervin, a U.S. swimmer who won gold medals in the 2000 and 2016 Olympics, lit the Maccabiah flame for the quadriennial competition that has been dubbed the “Jewish Olympics.” He was joined carrying torches by Yarden Gerbi, an Israeli judoka who took the bronze medal at the 2016 Olympics in Rio; Omri Casspi, the first Israeli to play in the NBA and now a member of the world champion Golden State Warriors; Fabien Gilot, a French swimmer and three-time medalist; Neta Rivkin, the first Israeli rhythmic gymnast to win a medal in both the World and European championships; Moran Samuel, an Israeli rower who medaled at the Rio Paralympics in 2016, and Ori Sasson, an Israeli judoka who also won a bronze in Rio.

In 1932, the first Maccabiah Games featured some 390 athletes from 18 countries.

Be the first to comment on "At Maccabiah Games opening: Singing, dancing and a hockey player’s wedding"