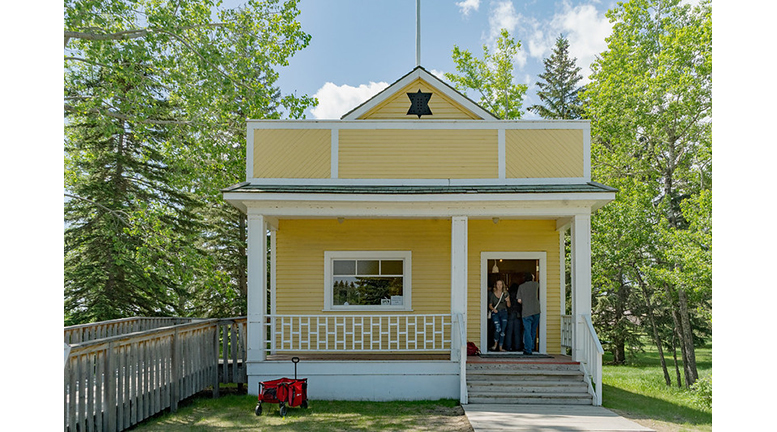 Little Synagogue on the Prairie at Calgary's Heritage Park. Photo by Tony Wasserman.

(AJNews) – Visitors to Calgary’s Heritage Park living history museum will find an important piece of Jewish-Canadian and western Canadian history — the Little Synagogue on the Prairie.

Irena Karshenbaum presented to Jewish Heritage Centre of Western Canada in Winnipeg via Zoom on May 30, detailing her work to bring the old rural synagogue to Calgary.

“When you go in, it’s as if you’re going back into that time period,” Karshenbaum said of the living history concept. “In Heritage Park, you’re going back in time to what Calgary and southern Alberta was like between the 1860s and the First World War.”

Rather than learning history through paintings, artifacts and writing on plaques, you learn through immersing yourself in the time period — the attire, buildings, transportation and activities.

Back in the mid-aughts, Karshenbaum noticed there was no synagogue at Heritage Park and decided to rectify that. Her first step was founding the Little Synagogue on the Prairie Society and bringing on about 60 volunteers to the project. They ended up raising $1.1 million.

Their initial plan was to build a replica of a building they thought had been “lost on the prairies” called the Montefiore Institute, Karshenbaum added. But after their proposal was accepted, a society board member drove to Hanna, Alta., and found the building, so their task became moving the building.

They also contributed a $250,000 endowment to maintain the building indefinitely.

The shul, which was built in 1916, was originally located in a Jewish farming colony near the Alberta-Saskatchewan border. It only lasted as a synagogue until the colony was vacated about 12 years later. In 1940, the building was taken to Hanna and converted to a family home, where it remained until 2008.

“It was a tremendous amount of work,” Karshenbaum says of the process of getting the building to Calgary. First they hired a moving company who brought it to a feedlot near Strathmore to refurbish it. “They slid these giant wooden beams under the building … and they rolled the beams and the building cut off from the foundation, because we only wanted the building and we only bought the building, not the foundation or the land it was on.”

The restoration work took about five months, she added.

Karshenbaum says the Montefiore shul is one of the oldest surviving synagogues in western Canada.

“It’s an amazing story from the perspective of how a group of people came together and did this project really having no money,” she said. “(The shul) was found, it was moved, it was restored and it was gifted to the largest historical village in Canada, and through this synagogue it tells the Jewish chapter of Alberta history.

“The Jewish story stands in for many ethnic groups that came to settle western Canada.”