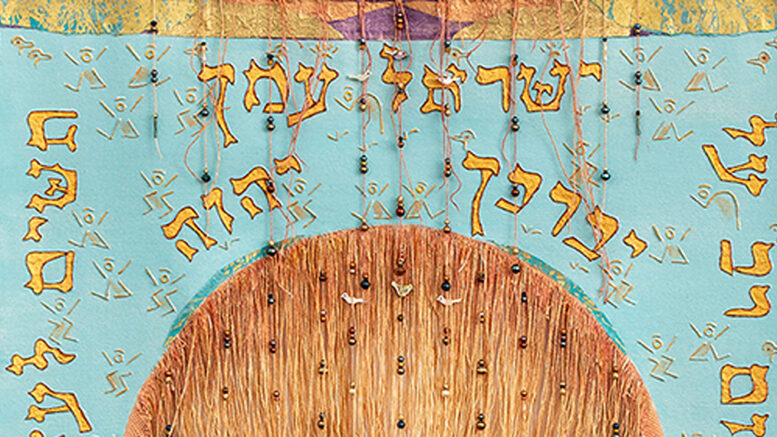 (Detail from) The Shabbat Project by Laurie Wohl - the featured guest on the Art & Scroll Studio zoom series on January 18. Photo supplied. 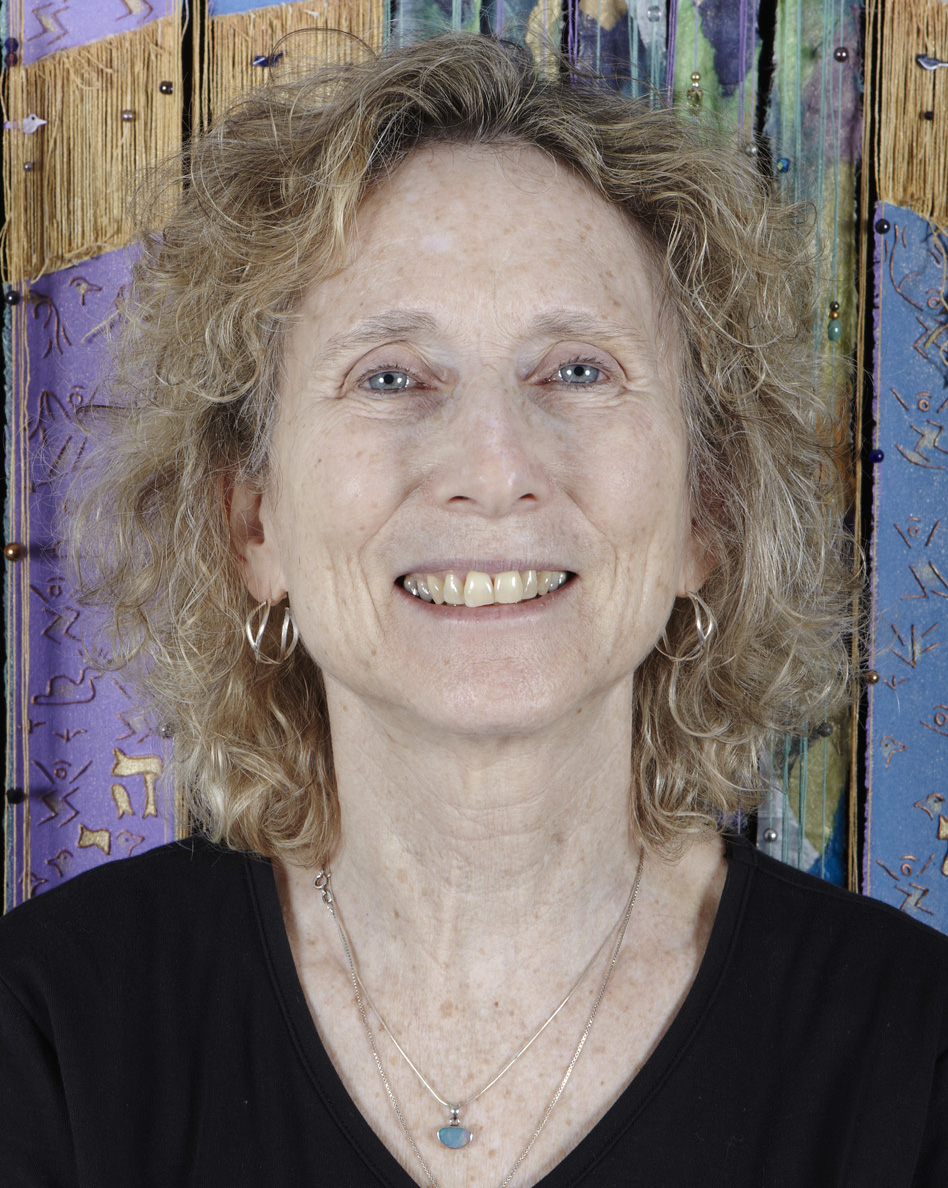 (AJNews) – Laurie Wohl does the opposite of what you would expect from a fibre artist. Using spiritual narratives found in various text sources, she alludes to the oldest traditions of narrative textiles, but in a completely contemporary fashion. Her “Unweavings” are a modern take on storytelling in textile form with the addition of calligraphy, beading and figurative symbols.

The earliest evidence of weaving, closely related to basketry, dates from Neolithic cultures of about 5000 BCE. The people of the Navajo Nation have used weaving to preserve the stories passed down through generations, and their rich way of life. The art form dates back to ancient times in many regions around the world. Laurie pays homage to these rich traditions using form, colour, texture and calligraphy. She interprets each piece by integrating materials with fibre, text, and pattern. She boldly “unweaves” the fabric to reveal beginnings of new artwork.

Her journey from experience to artistic expression began in Africa during her time as an Artist-in-Residence, Fordsburg Artists’ Studios, Johannesburg, South Africa, 1997. There she experienced the revelation that art is broader than the edges of the canvas. The free style approach to both media and social expression inspired her to appreciate the latitude to be found when undertaking an unconventional approach to message and materials. Carefully disassembling the canvas and rebuilding it into a new design became a method to convey in an unconventional way, commentary about society, culture, and hope.

Her work continues to respond to the unrest in our world through artistic expression, using music, poetry and dance as inspiration and colour, texture and form as language.

Presenting stunning visual statements that are arresting and intriguing, Laurie’s work draws you in to discover what is hidden within each piece. One might think of an ordinary wall hanging from a home décor store, but Laurie’s work delivers so much more. The text challenges one to contemplate the inspiration of the spiritual connection, and the play of colour and texture extends the meaning within a collage of materials. The overall effect is greater than the sum of its parts.

Laurie states, “The words within each piece and the unwoven form that suggests these words serve as visual interpretations of various Biblical and poetic texts. Calligraphy for these texts may be in English, Hebrew, Arabic and Greek. The Unwoven spaces form symbolic shapes – wings, ladders prayer shawls, veils, trees, falling waters, and the sacred architecture of windows, domes and gates. The narrative is enhanced by my own distinctive iconography, indicating guardians, messengers, journeying and praying figures, processional figures and more. The calligraphy and my own iconography – raised from the surface of the textile – serve as both conveyors of meaning and part of the abstract patterning of each piece.”

The textile used is a heavy cotton canvas. She first releases either the warp or weft threads to create the desired shape. Various textures may be collaged onto the surface, such as fibrous papers, sand and pumice. The images and calligraphy are applied with modeling paste. Then she applies acrylic paints to the surface, and a final thin layer of gold wash. In the last part of the process, beads – prayers and marking points – are affixed with acrylic gel.

Wohl’s new body of work, The Shabbat Project, is traveling through 2023 to venues in California, New York City, and Vancouver. 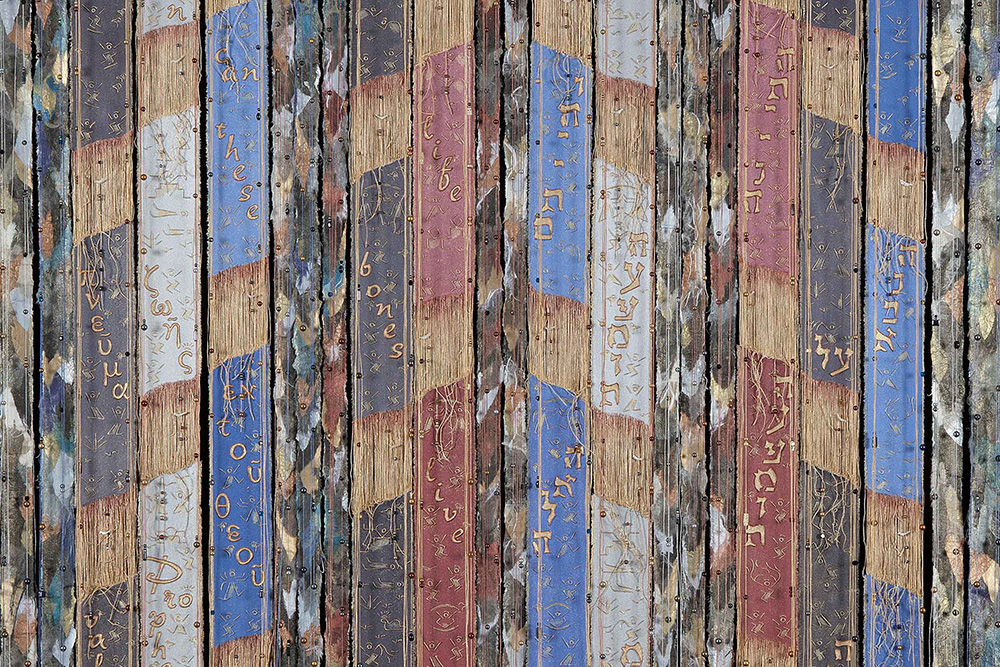 “Birds of Longing: Exile and Memory” interweaves Christian, Jewish, and Muslim poetry and spiritual texts from the medieval period of the Convivencia in Spain with texts of contemporary Middle Eastern poets, particularly Palestinian, Syrian and Israeli, in the context of the Unweavings fiber art pieces. The project consists of 18 pieces, completed between 2011-2015.

Like so many profound works of art, once made aware of the intrinsic artistic intent, one cannot “unsee it.” Music and dance play a profound role as both the inspiration for the work, as well as accompanying the installations.

“By unweaving the fabric, I make manifest what is hidden within the material – liberating the threads to create shape, then “reweaving” through colour, texture, and text. The narrative emerges from the juxtaposition of images within the surface, from the texts I choose, and from the combination of colour, texture and pattern which convey a sense of time and place. And the pieces become carriers of my individual and our collective memories through the spiritual narratives they transmit.”

If the purpose of art is to communicate meaning, to offer the artist’s perspective to the viewer, then Laurie’s work is a dynamic concerto that is powerful and moving. By taking her cue from the fabric that she unweaves, she conveys her spiritual journey through text, visual rhythm and tactile elements. The effect leaves the viewer engaged in contemplation of beauty and complexity; a reflection of our own unique paths.

Laurie Wohl will be the featured guest on January 18, 2023, 7:00 pm MST on Art and Scroll Studio: A zoom series that celebrates the makers and creators of Judaic art.

To register for the virtual and free program please click here: https://bit.ly/LaurieWohlTickets.

Be the first to comment on "Laurie Wohl “Unweaves” the World: She’s the featured guest on Art & Scroll Studio Jan. 18"