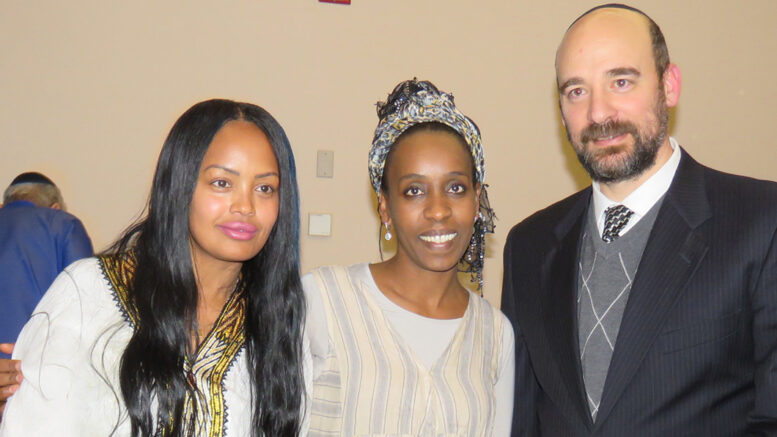 An amazing Sigd celebration was held at Beth Israel Shul in Edmonton on November 22 which included a delicious Ethiopian feast and an engaging presentation by Rabbi Guy and Fentaye Tal, assisted by Michal Balay.

(AJN) – Beth Israel Congregation (affectionately known as the Family Shul) welcomed Rabbi Guy and Fentaye Tal and their family to Edmonton in August and they are quickly adjusting to the city and the community. Members of the congregation are helping them with the transition and showing them the warmth and kindness that makes our community so special. 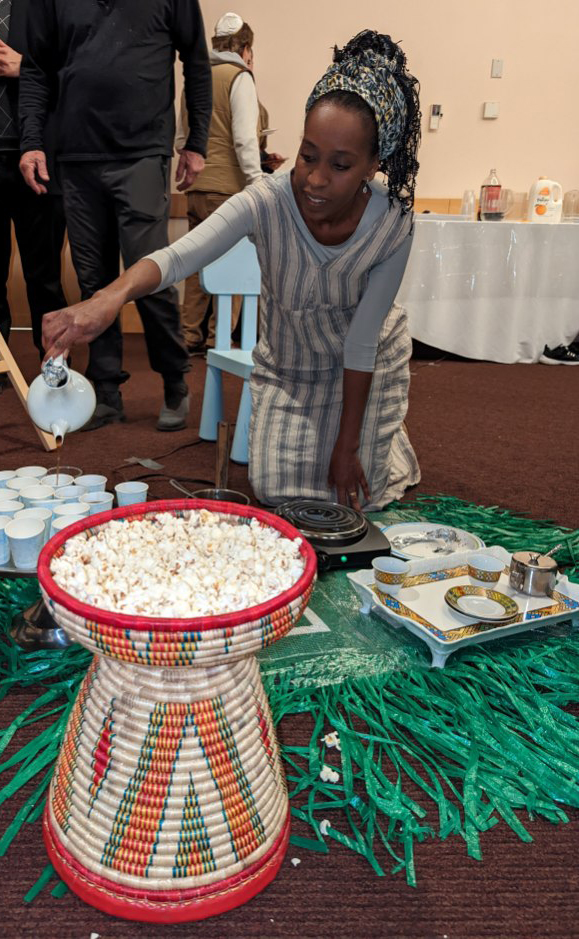 On November 22, in a celebration of joy and culture, the Tal family turned the tables and welcomed the congregation to the Ethiopian Jewish holiday of Sigd with a wonderful feast and an engaging presentation.

Sigd was largely unknown to the congregation and it had definitely never been celebrated here before so it was a new and exciting program for everyone. As in most Jewish celebrations, food is at the centre of the holiday. Rebbitzen Fentaye organized the preparation of a gorgeous feast that included an Ethiopian flatbread called injera that was used to “spoon up” a variety of sauces and vegetable dishes that were delicious. The buffet table was decorated with beautiful and colourful baskets that set the stage for a taste bud adventure. She was ably assisted by Michal Balay who set up an amazing, tranquil coffee station with pillows on the floor, and she served Ethiopian coffee to congregants.

People visited, ate, drank coffee and enjoyed themselves in a relaxed atmosphere for the first part of the program. The shul ballroom felt transformed by the beauty of the event. There were about 85 people in attendance – including 15 or so kids so it was a busy and noisy program. Posted on the shul’s walls were some information sheets about the history of Ethiopian Jewry and their difficult and traumatic journey to Israel.

The second part of the program featured a shiur by Rabbi Tal about Ethiopian Jewry and the holiday of Sigd. He explained that Ethiopian Jews can be traced back to the lost tribe of Dan.

Sigd is about accepting the Torah and yearning for Israel and the Temple. It is thought to be the date on which G-d first revealed himself to Moses. 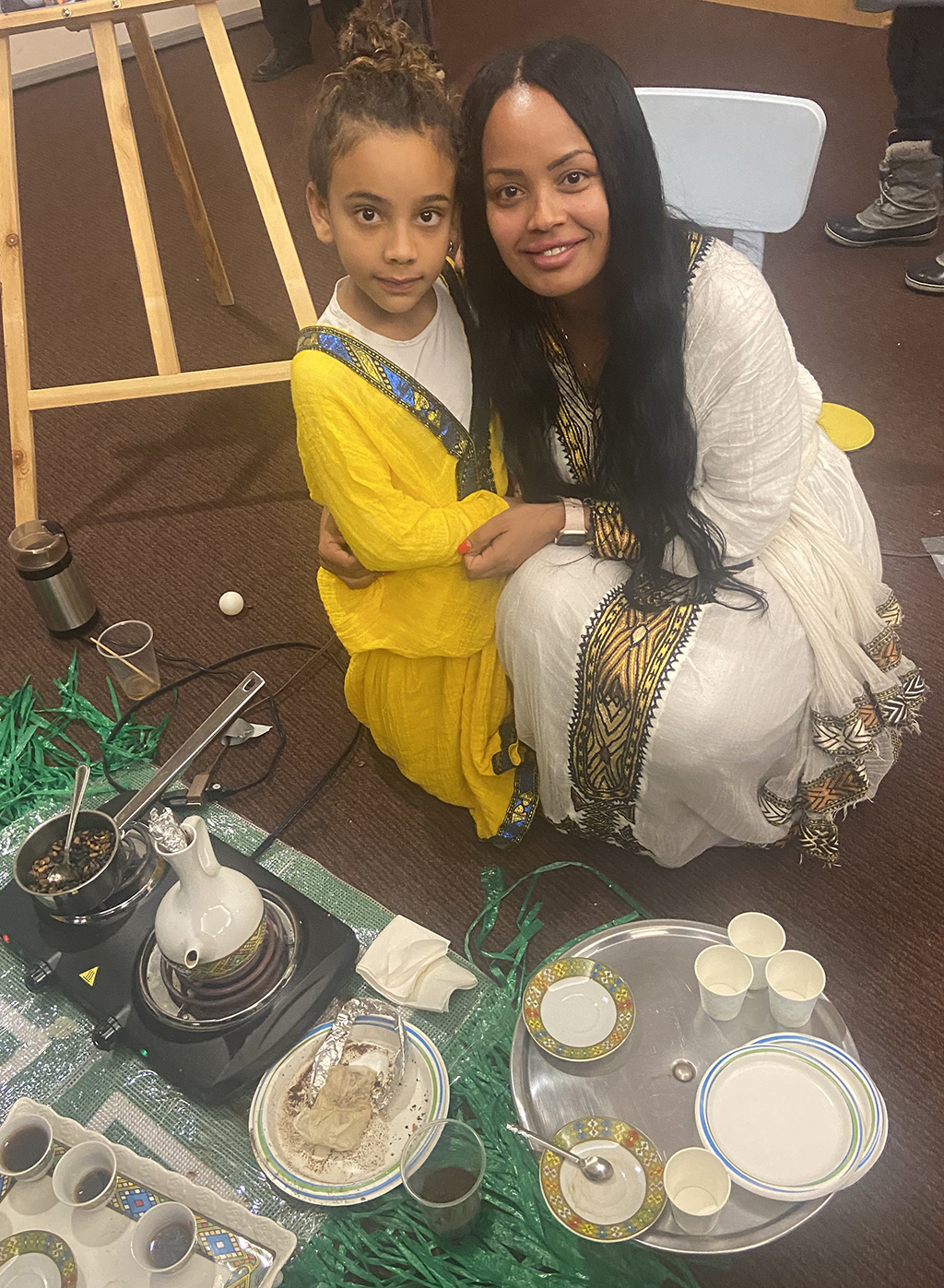 Michal and a helper. (Photo by Jodi Zabludowski)

Traditionally, members of the Beta Israel community fast on Sigd, read from their scriptures (which are called the Octateuch, the five books of Moses plus Joshua, Judges and Ruth), recite psalms, and pray for the rebuilding of the Temple. It is also a time for renewing the Israelite covenant with G-d. The fast ends mid-day with a feast and dancing.

Since 2008, Sigd has been recognized as a state holiday in Israel. In Israel today, it is an opportunity to raise Ethiopian Jewish visibility and educate Israeli Jews about Beta Israel customs. It is also a time to recognize and remember all the people who lost their lives trying to leave Ethiopia and immigrate to Israel.

Rabbi Tal’s presentation was interesting and informative. He showed a video of a Sigd celebration that featured music, dancing and devotion. He described the history of Ethiopian immigration to Israel. In 1991 over 14000 Ethiopian Jews were airlifted to Israel as part of a massive rescue mission called Operation Solomon but there has been little movement for family members or others since then. Many people have died trying to make the journey and life has not been easy in Israel. There are still thousands of Ethiopian Jews waiting to make Aliya. Rabbi Tal wove the story of Fentaye’s family’s immigration from Ethiopia to Israel with the historical information that made the presentation both personal and factual. His admiration for their journey was heartwarming.

Congregants came away with a better understanding of the joy and the hardships of Ethiopian Jews both in Ethiopia and in Israel. They also were gifted with new insight, warm feelings and a stronger bond with Rabbi Guy and Fentaye Tal.

Written using files from My Jewish Learning, a division of 70 Faces Media.

Be the first to comment on "Beth Israel congregation celebrates Sigd, the ancient Ethiopian Jewish holiday"