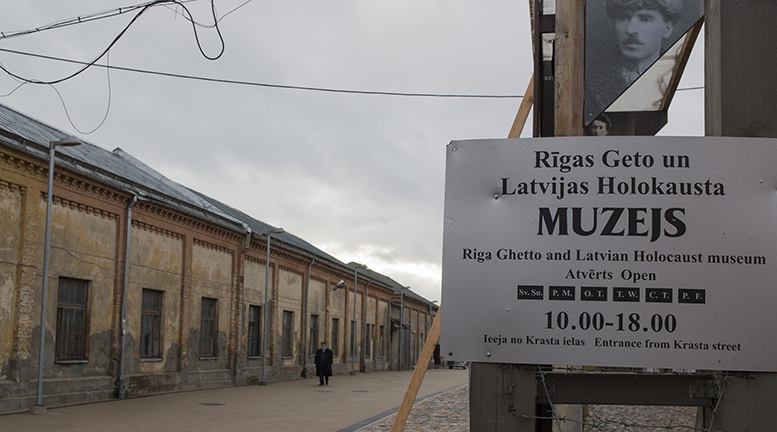 A man stands inside the Riga Ghetto Museum in Riga, Latvia, Jan. 11, 2014. (Fishman/Ullstein via Getty Images)

(JTA) — Latvia’s parliament voted to pay $46 million to the country’s Jewish community for property that was stolen from it during the Holocaust from individuals with no surviving legal heirs.

The Holocaust restitution law passed last week by the Saeima, Latvia’s parliament, in Riga states that the country is not to blame for the Holocaust or the theft, which the law states was conducted by the Nazis and later by the communists who replaced them as rulers of Latvia. Rather than reparations, the law refers to the payment as a form of “goodwill compensation,” according to the LETA news agency. The compensation voted on last week will be paid in annual increments of $4.6 million from the state budget to the Jewish community until 2032.

Jewish groups have been lobbying for the compensation of communal-owned assets in Latvia since 1992. Claims for restitution of private-owned property have been largely denied in Latvia, according to the World Jewish Restitution Organization, an organization dedicated to the restitution of Jewish property in Europe.

Of the 70,000 Jews who were living inside modern-day Latvia when the Germans invaded in 1941, only 200 survived, according to Yad Vashem, Israel’s Holocaust museum. Locals, including Latvian police, played a key role in the genocide, according to the museum, forming armed groups to attack local Jews, whom they believed were collaborating with communists.

As in other Eastern European countries, Latvia’s government has protested claims that its predecessors and population were partially responsible for the Holocaust. Many Latvians view their country, despite strong support for the Nazis during the war years, as a victim of Adolf Hitler’s occupation.

Hundreds of Latvians served in special battalions of the Nazis’ SS elite military force. The veterans of that unit hold annual marches in Riga, which are the only SS veteran marches in the world.