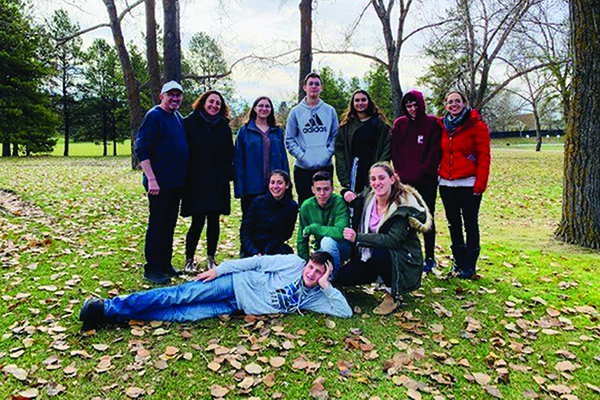 Dr. Ivan Steiner, back left, and teens from the Northern Galilee at the last Mifgash in Edmonton.

(AJNews) – A substantial donation has been made by a group of anonymous donors to a project in Edmonton’s P2G region of the Northern Galilee in honour of Dr. Ivan Steiner’s 70th birthday, and on the occasion of his stepping down as Chair of this program after 22 successful years.

The Madatzim Young Leadership Training project will be run by the Upper Galilee Regional Council and will train young leaders and create a young leadership training system which will serve as a reserve for the leadership of the community. The community believes that, “In order to raise an involved generation that takes responsibility for itself and others, it is necessary to locate suitable youth who will be able to take part in training and leadership.” A significant number of youths who will be engaged in the program have been part of delegations to the partnership communities of Edmonton, Calgary and Vancouver over the years.

Dr. Steiner, who is a Professor Emeritus with the University of Alberta Faculty of Medicine, has been working on the P2G project for the past 22 years. This project builds bridges between the youth of Edmonton and the youth of the Northern Galilee. A big part of this project are the student exchanges between Emek Hahula school and our own Talmud Torah school, as well as other children in our community. It also has included teacher confer-ences, a computer-based pen-pal program, semi-annual meetings in Canada and Israel, and the funding of various projects in the region.

Ivan has chaired the local committee for many years, as well as the National Coast-to-Coast Committee of members from all the regional communities in Northern Israel, including Galil Elyon, Yesod Hamala, Metulla, Kiryat Shmona and Mevoot Ha Hermon. The Canadian communities involved include Edmonton, Calgary, Vancouver, Winnipeg, Halifax and Ottawa. Ivan and his wife, Ruth, have travelled to Israel multiple times and have made long-lasting friendships with the people there, as have all the participants in the program. These programs are primarily funded by the Jewish Federation of Edmonton through the UJA campaign, the Edmonton Jewish Film Festival, and private donations such as this one.

The Upper Galilee Regional Council consists of 29 kibbutzim. There are about 3100 children from grades 1-12. This program will train 80 leaders (madatzim) in the 10th-12th grade group, willing to take personal responsibility and connect to communities and settlements in the region. It will work on two levels:

It will locate involved and caring youth, who are willing to take responsibility to undergo professional training and to become professional youth leaders.

Thanks to the funding of $31,500 from local anonymous donors, this project honouring Ivan will hopefully begin soon. The Jewish Federation of Edmonton sincerely thanks all donors and volunteers involved in this project.

Visit jewishedmonton.org for more information on P2G, other projects, or how to get involved.

1 Comment on "Large Donation Made to Edmonton Israel Project"