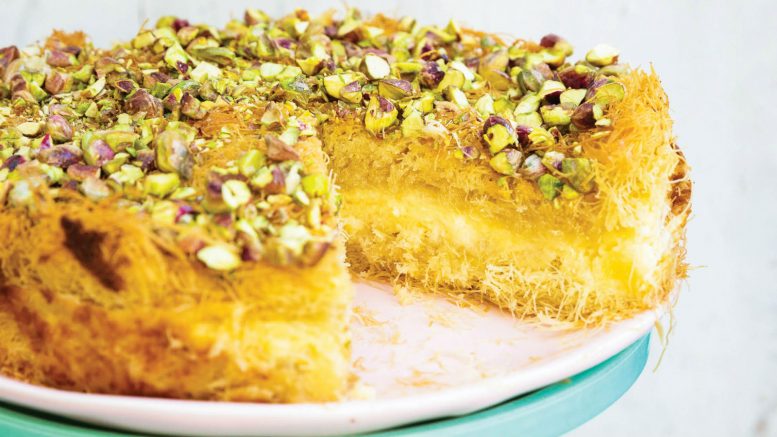 By Tracey Fine and Georgia Tarn

(The Nosher via JTA) — This cheesecake recipe was inspired by new and old flavors and our love of baklava and cheesecake. After all, who doesn’t love these desserts?

We felt that the smoothness and creaminess of cheesecake needed a modern crunch and kataifi — shredded phyllo dough that is used to make baklava and other Middle Eastern pastries — was just the ingredient to try.

While we were at it, we experimented and added nuts. And then to finish off this special cheesecake and give it a  little more Middle Eastern flair, we added a rosewater syrup.

The resulting cake is similar to kanafeh, a Middle Eastern cheese pastry. It was so amazing, we surprised even ourselves.

This cheesecake has layers of flavor and texture that equal heaven on a plate: crunchy from the combination of almonds and pistachios, chewy from the kataifi pastry, smooth and creamy from the cheese and brought together with the slight perfumed taste of the rosewater syrup.

The best thing about the recipe is that it is simple to make, but looks quite impressive.

This recipe is excerpted with permission from “The Modern Jewish Table.”

2. In a heavy-bottomed saucepan, place sugar, water and lemon juice. Bring to a boil and then simmer on low heat for approximately 10 minutes or until the liquid has become a syrup. Remove from heat and leave to cool.

3. When the syrup has cooled, add the rosewater and set aside to be used later.

4. Use a little of the butter to grease an 11-inch springform pan.

5. In a large bowl, break apart the kataifi pastry until all the shreds are loose. Mix in the rest of the melted butter, using your hands, so the pastry is well coated.

6. Beat together the mascarpone cheese, cream cheese, egg yolks and sugar until smooth.

7. Sprinkle blanched almonds over the bottom of the pan. Take half of the kataifi dough and place over the almonds, pressing it down.

8. Spread the cheese mixture over the kataifi, using a palette knife so you have an even layer. Take the other half of the kataifi dough and press over the top.

9. Bake for approximately 30 minutes until golden.

10. Remove from the oven and sprinkle ground pistachios on the top. Pour the rosewater syrup evenly over the cake. Leave to cool and remove from pan.

(Tracey Fine and Georgie Tarn, both of London, created their brand, the Jewish Princesses [TheJewishPrincesses.com], in 2005 to promote Jewish food and lifestyle. They have published three books.)

Be the first to comment on "Kanafeh Cheesecake Recipe"