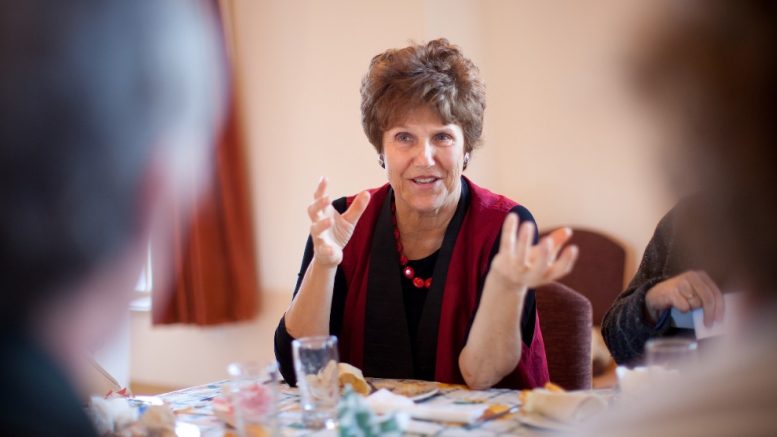 (JTA) — If you’re part of a Jewish family in the U.S., there’s a decent chance you grew up in the vicinity of a Joan Nathan cookbook. Her many books, like “Jewish Cooking in America,” have been staples of the American Jewish experience for decades.

Nathan, 76, will be honored Dec. 2 at a gala dinner for the Museum of the Jewish People at Beit Hatfusot in New York City. To mark the occasion, she has released a list of her “Jewish food must-haves” — we’ll take it to mean her favorite Jewish dishes.

Nathan is noted for researching and promoting international Jewish cuisines, and her list reflects that diversity. Here’s the list, with her commentary, courtesy of the museum:

Brisket braised in a savory wine and herb sauce: Long and slow is my mantra for brisket. If there is one Jewish dish that transcends many cultures, it is brisket, braised for a long time in a savory wine sauce with herbs.

Pletzel rolls with caramelized onions and poppy seeds: I still remember the first time I ate a pletzel, a Polish roll. It was in a bread basket with salt sticks served at Ratner’s on the Lower East Side.

Chocolate babka: I have yet to meet anyone who doesn’t like chocolate babka. I like it with good, bittersweet chocolate – not cocoa powder and not Nutella.

Apricot rugelach: This is what put Jewish sweets on the map, although no one knew that they were Jewish when the late Maida Heatter put them in her iconic “Book of Great Desserts.”

Libyan aharaimi: This is so good that it has become part of the panoply of Israeli cooking.

Yemenite soup with gilberte and hawayij: I first tasted this many years ago sitting cross-legged on the floor at the home of the late Yosef Zadok, a jeweler, rabbi and patriarch in Jerusalem. It is a comforting dish with ancient roots.

Dampfknudeln: For me the crowning Jewish dish is probably not Jewish at all. Dampfknudeln is a brioche-like cake with a caramel sauce drizzled on top. The Bavarian dessert was popularized by Catholics and, through the centuries, variations crossed over to the German Jews, who served it with dairy meals.

Salade juive: Each Jewish North African family has its own rendition of what the French call salade juive. It is cooked down tomatoes with a splash of peppers and maybe onions, and served cold with at least 11 other salads for the beginning of the Sabbath meal.