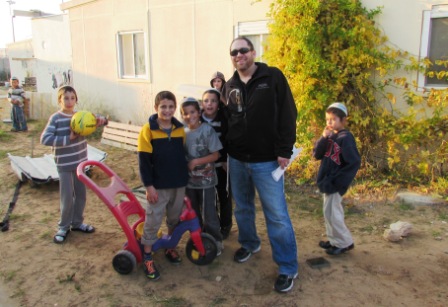 Jay Cairns, Executive Director of the Edmonton branch of Jewish National Fund (JNF) was in Israel last month as part of a JNF Canada Staff Mission to Israel.

He had an incredible trip and learned so much about the tremendous impact that JNF Canada has on their projects in Israel.

“Every community we visited expressed their sincere gratitude for the contribution JNF Canada has made to their community,” said Cairns.

This past summer within 48 hours of Operation Protective Edge, JNF Canada launched a campaign directing funds towards supplying Bomb Shelters to the communities in the South living on the border to Gaza. Over 2 months these communities faced the threat of thousands of rockets.

“The quick response and implementation of the shelters was a theme expressed in the thank you’s that these communities asked us to pass on,” added Cairns,  “and that the impact donors are having on the people living in these communities and truly making a difference to their quality of life.”

In Haluziot, along the Egyptian border, the future of the Jewish people is clearly alive and thriving. A young community dedicated to securing and defining Jewish presence in the Negev, these neo-pioneers are committed to establishing a presence along the border of Egypt and Gaza. The communities are growing rapidly; over the next 3 years they expect to grow the community from a couple hundred families to a couple thousand. Halutziot is the realization of a vision that Ben Gurion had of developing the Negev, the infrastructure was supported through the 2008 Edmonton Negev Gala in honour of Dr. Sam & Michelle Marcushamer.

“JNF Canada is involved in a number of projects that are transforming Israel, from the Research and Development stations and communities in the Arava to the tunnel excavations underneath the Western Wall, JNF’s commitment to securing, beautifying and educating tourists about the importance of these areas is something the Jewish world can be proud of,” explained Cairns.

“Thank you to all JNF Tu Bi ‘Shevat Telethon volunteers and supporters!” he concluded.  “Did we miss you? Call the office today to make your Tu Bi Shevat contribution today!”