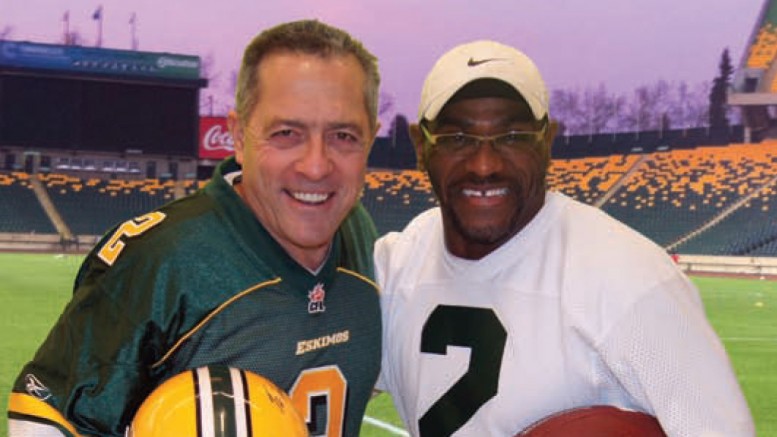 On April 19 Beth Shalom synagogue will be honouring Congregation Past President Jeff Rubin with a gala event, which is sure to be a very special and fun night for the entire community. Hosted at the Fantasyland Hotel, Jeff is being recognized for his tireless efforts to help local Jewish organizations, and make Jewish life in Edmonton a great experience for everyone.

An avid Edmonton sports fan, it is impossible to wipe the smile off Jeff’s face when discussing who one of the special guests in attendance will be – former Edmonton Eskimo and CFL Hall of Famer Henry “Gizmo” Williams. From 1986 to 2000 when number 2 in green and gold caught the football, you knew something amazing was going to take place. Known for his return game and for his remarkable back-flip end zone celebrations, Gizmo defined the roll of a kick return specialist in the CFL.

One of his more memorable feats came in the 1987 Grey Cup victory by the Edmonton Eskimos. Off of a missed field goal, Gizmo had the longest return in Grey Cup history running the ball back 115 yards for a touchdown helping the Eskimos secure the victory. Despite standing at just 5’6” Gizmo never let anything, or anyone, especially on the field, stand in his way. During his time with the Eskimos he set over 20 CFL records, many which still stand today.

Life on and off the field has always been of the utmost importance to Gizmo. In 1988-89 he was honoured with the Eskimo Community Service award for his work on the field and since retirement he has continued to strive to improve his community through motivational speaking. From growing up in poverty in Tennessee, to seeing his family stricken by multiple sclerosis, to finding success on the gridiron, Gizmo has lived though it all and his story is truly one of inspiration.

Gizmo Williams recently was a keynote speaker at a Red Deer College event and received rave reviews as follows: “Henry had everybody laughing with his wit, enthusiasm, and comedic style. He also had the group with tears of sadness in their eyes when reflecting on his family’s history. Of all the comments that I have had on him as a guest speaker for our Trades Retreat, the one that is repeated the most is ‘it will be very hard to beat Henry as a guest speaker at any of our next retreats.’ His message to our group of instructors and support staff was very effective, timely, and well accepted.”

The Eatonia District Recreation Board were also thrilled with his speech at one of their recent events: “The speaker always sets the mood for the evening, and Henry “Gizmo” Williams did an outstanding job. I’ve had nothing but positive feedback from the people in attendance. Henry was possibly the best speaker we’ve ever had – he was entertaining before, during and after his actual on stage performance.”

The Beth Shalom will pay homage to Jeff’s dedicated services as well as his enthusiasm and whimsical sense of humour with what is sure to be an enjoyable event. Edmonton Eskimos’ legend Henry “Gizmo” Williams will be in attendance to help honour Jeff. Mark April 19th on your calendar and watch for more information as the date draws near. Don’t miss this special event!