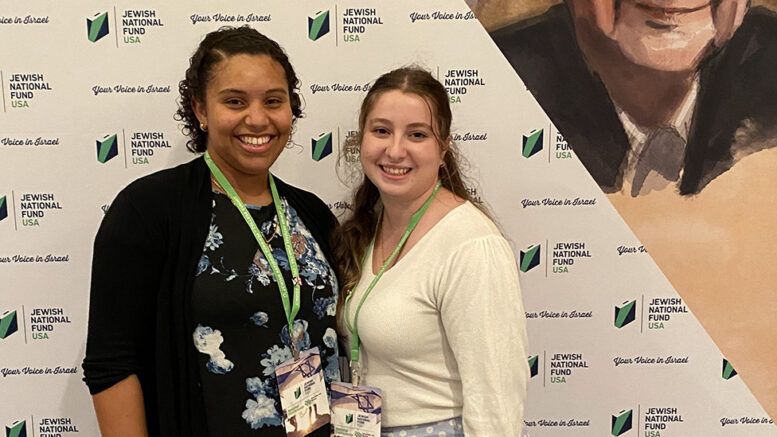 By Carmel Erlich and Josie Coutain-Segall

On November 4-6, the Jewish National Fund USA (JNF-USA) held their first in-person National Conference since pre-pandemic. They welcomed 1300 Jewish and Zionist attendees from across North America. A little under half of these attendees were post-secondary students, who attended the College Summit. With a focus on antisemitism on campuses and Zionist advocacy, the College Summit’s main theme was being proudly Jewish and/or Zionist in an era of increasing Jew-hatred and anti-Zionism.

Carmel Erlich and Josie Coutain-Segall, students at the University of Alberta, were thrilled to attend the conference as College Summit participants. Both students are active members in the Edmonton Jewish community, serving as members of the Hillel Edmonton Executive Committee, and participating in Chabad on Campus programming. The students approached JNF Edmonton Executive Director Jay Cairns for guidance with navigating the logistics of participation. He drew on his experience with Hillel and young Jewish adults and provided them with the help and encouragement they needed to make it happen.

The conference was heavily subsidized for college students, and JNF Canada generously offered a further subsidy for their travel expenses. Some sessions Carmel and Josie attended included, Champions for Zionism, JNF-USA Shark Tank: The Successes of Today and Our Vision for the Future, Let’s Hear From the Students: Being a Zionist on Campus Today, Jewish Pride, and Confronting Jew Hatred in the 21st Century. A special performance by members of the Israel Defence Force’s Special in Uniform Band kicked off the event. Special in Uniform is a program which provides Israelis with disabilities an opportunity to serve in the military as valued members of Israeli society. Notable speakers include authors and activists Ben Freeman, Hen Mazzig, and Dr. Rachel Fish. Also present were Caravan for Democracy alumni, non-Jewish students who have travelled to Israel to see the country for themselves, and have dedicated themselves to being Zionist activists on their respective campuses.

“The conference was just such an incredible experience to be around other like-minded individuals and celebrate our Jewish pride together,” says Josie. A moment which really resonated with her was a story told by Mike Leven, founder of the Jewish Future Pledge. He recounted the story of one Shabbat that he experienced at the age of ten years old. His grandfather had the radio on and was writing notes, breaking laws of Shabbat which he usually observed. After inquiring as to why he was doing this, Mike’s grandfather looked up with tears in his eyes, and said “We have a home!” The date was Saturday, November 29, 1947 – the day the United Nations approved the creation of the State of Israel in what was then the British Mandate of Palestine.

Carmel says that “the JNF College Summit was an enriching experience which allowed me to further delve into the roots of Zionism. Most importantly, this conference showed me that I am not alone in the battle against antisemitism and empowered me to continue this journey on campus!”

Carmel further stated that her most memorable moment was during Scott Gendall’s speech during the opening ceremony where he discussed the blatant reality of antisemitism in contemporary society. Most importantly, Carmel shared that his speech regarding the increase in antisemitism and violence against Jews hardened the reality that the battle of antisemitism is not limited to physical hate, but also hate on social media. A quote that resonated with her by Scott Gendall was, “Today, Shabbat Shalom is more of a prayer than a greeting. עם ישראל חי.”

The conference also highlighted many of JNF’s current projects, including the $350 million World Zionist Village project, which will be a place where Jewish people and Zionists from across the world can meet to have discussions. Its aim is to build a rich village for Jewish people everywhere, to host international interns, collaborate with Israelis, host gap year programs, be home to Zionist education programs, and act as an additional space for JNF’s highly successful Alexander Muss High School program, among other initiatives.

Next year’s conference will be held in Denver, Colorado from November 30 – December 3. More information can be found at jnf-usa.force.com.