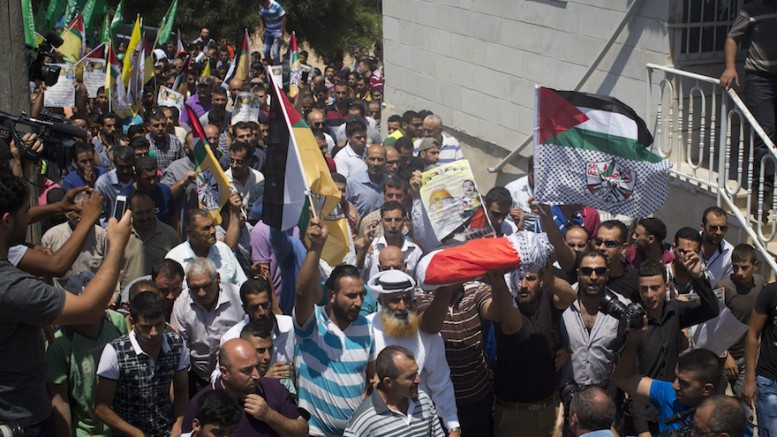 A house fire in the Palestinian village of Duma, West Bank, suspected to have been set by Jewish extremists, killed an 18-month-old Palestinian child, injuring both the parents and four year old son. (Oren Ziv/Getty Images)

WASHINGTON (JTA) – Ahead of what may be the toughest diplomatic battle of his career, a final bid to kill the Iran nuclear deal, Israeli Prime Minister Benjamin Netanyahu has suddenly found himself facing down a terrorist threat – apparently from Jews.

The flow of Iran messaging from the Prime Minister’s Office was interrupted Friday by Netanyahu’s fierce condemnation of a predawn arson attack in the West Bank village of Duma, near Nablus, which killed an 18-month-old boy, Ali Saad Dawabsha.

Extremist Jewish settlers were suspected. Hebrew slogans were spray painted at the scene, and witnesses reported seeing masked men fleeing toward a nearby settlement. Netanyahu ordered an all-out manhunt to find the killers.

“We condemn this,” Netanyahu said after a bedside visit with Dawabsha’s 4-year-old brother, Ahmed, who was hospitalized along with his parents for severe burns. “There is zero tolerance for terrorism wherever it comes from, whatever side of the fence it comes from, we have to fight it and fight it together.”

The attack, and Netanyahu’s attempt to tamp out a flare-up before it begins, distracts from his last-ditch attempt to quash the nuclear agreement between Iran and the major powers, which Netanyahu has repeatedly said endangers Israel.

Israeli ambassador to Washington, Ron Dermer, has been working overtime to rally Congress to kill the deal within the next two months — the window for legislative action. Netanyahu is scheduled to speak to American Jews in a webcast Tuesday in a bid to fortify opposition to the deal, which polls show many American Jews have embraced.

The U.S. State Department commended Netanyahu for quickly ordering the manhunt and made clear that the last thing the Obama administration wanted to see was an escalation.

“We welcome Prime Minister Netanyahu’s order to Israel’s security forces to use all means at their disposal to apprehend the murderers for what he called an act of terrorism and bring them to justice,” said a statement from spokesman Mark Toner. “We urge all sides to maintain calm and avoid escalating tensions in the wake of this tragic incident.”

B’Tselem, a human rights group, said the fatal attack came after a string of arson attacks in the West Bank and accused Israeli authorities of not doing enough to track down the perpetrators.

“Since August 2012, Israeli civilians set fire to nine Palestinian homes in the West Bank,” B’Tselem said. “Additionally, a Molotov cocktail was thrown at a Palestinian taxi, severely burning the family on board. No one was charged in any of these cases.”

Jewish groups in the United States were quick to condemn the attack, and in a sign of the challenge facing Netanyahu as he tries to rally the community on issues like Iran, the Reform movement, like B’Tselem, suggested the attack was part of a broader resurgence of Jewish terrorism in Israel.

“All indications are that the perpetrators of this violence are Jews, engaged in the kind of ‘price tag’ attacks that have become all too frequent,” Rabbi Jonah Pesner, the director of Reform’s Religious Action Center, said in a statement.

“The growing phenomenon within Israel of racist incitement violates the values of democracy and compassion. It contributes to an atmosphere in which the violence like that seen last night can occur.”

In addition to the Iran tangle, Israel faces a likely bid in September by the Palestinians to once again seek statehood recognition at the U.N. Security Council. With the backing this time of France, one of the council’s permanent members, they may be closer than ever.

Also looming is the International Criminal Court’s consideration of whether to bring war crimes charges against Israelis involved in last summer’s war with Hamas in the Gaza Strip. Palestinian officials were quick to add the killing to their case.

A spokesman for Palestinian Authority President Mahmoud Abbas said the Israeli government’s support for settlements drove the attack, and urged the international community to respond. The killing will be among issues brought to the International Criminal Court against Israel, said spokesman Nabil Abu Rudeineh.

Netanyahu usually counters such threats with counter-threats, including in the past to withhold funds the Palestinian Authority receives from Israel in customs and taxes. But on Friday, Netanyahu was notably conciliatory toward Abbas.

In a statement, Netanyahu said he had called Abbas and told him: “We must fight terrorism together regardless of which side it comes from.”

Israeli President Reuven Rivlin, who has made outreach to Arab Israelis and Palestinians a hallmark of his presidency, also visited Ahmed Dwabsha in the hospital and cast the protection of Palestinians as a Zionist imperative.

“We have returned to our homeland, and from a position of sovereignty we must maintain law and order, and prevent all forms of inexplicable horrors, in the name of any kind of religious conviction, from any side,” he said.

Netanyahu deployed troops throughout the West Bank to prevent a flare-up of violence.

An Israeli policeman was lightly wounded in one of several riots and attacks by Palestinians following the toddler’s funeral. The officer was hit by a stone hurled at him by a Palestinian during a riot near the Temple Mount in eastern Jerusalem Friday, Army Radio reported. Security forces arrested a suspect in connection with the incident.

Separately, unidentified individuals opened fire on an Israeli vehicle near the West Bank settlement of Kochav Hashachar. The car was hit by bullets, but the passengers were not hurt.

In a third incident, rioters in the Jerusalem-area Palestinian village of Isawiya threw firebombs and stones at police officers, resulting in no injuries.