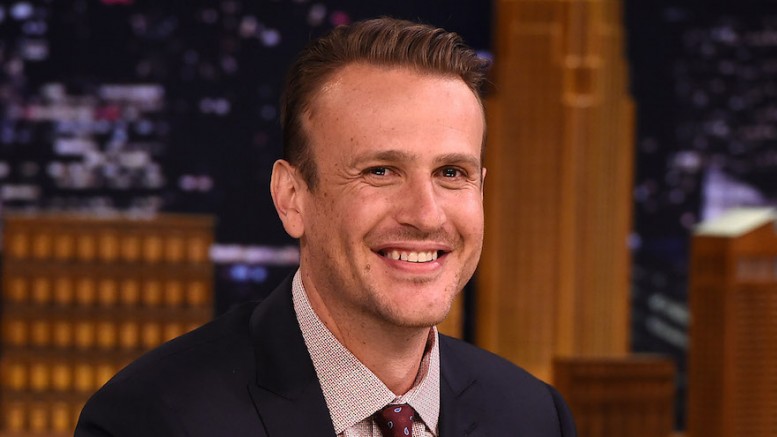 (JTA) — Actor Jason Segel — best known as the star of  “Forgetting Sarah Marshall” and “How I Met Your Mother” — opened up on Marc Maron’s “WTF” podcast this week about growing up with one Jewish parent and as a complete outsider.

Segel sat down for the Monday podcast ahead of the release of his film “The End of the Tour,” in which he plays the tortured writer David Foster Wallace — a career U-turn away from the comedic work that made him famous.

On Maron’s podcast (on which President Barack Obama was recently a guest), Segel said he long felt unsure of his place in the world. He traces the feeling back to growing up with a Jewish father and a Christian mother; attending Christian school during the day and Hebrew school at night.

“At Christian school you’re the Jewish kid, and at Hebrew school you’re the Christian kid. I think that’s the nature of groups,” he said. “And so everyone wants to compartmentalize people. And I think I decided at that point, like OK, its me versus the world, kind of.”

“Is your mom Jewish? No? You’re not a real Jew,” offered Maron, who is Jewish.

Segel recalled explaining his bar mitzvah to his Christian classmates as a pivotal moment that pushed him away from his peers and toward acting.

“This is when you become funny … Little 13-year-old Jason Segel standing there like, ‘On Saturday I become a man,’” he said, imitating his adolescent voice breaking. “It’s literally a direct cut to getting punched in the face.”

Weighing in on mixed-religion parenting, Segel said, “You know what? Neither of [my parents] are religious. So they made this decision that they were going to let me decide, which is the dumbest thing you can do for a kid. Because you don’t really care [at that age].”

Segel did credit his parents, though, with enrolling him in acting classes when he was a child. They were less concerned with the acting than with him becoming less shy and making some friends, he said.

And acting was indeed a refuge for him.

Segal recalled tapping into his childhood angst for the TV show that launched his career, “Freaks and Geeks,” created by Paul Feig and executive produced by Judd Apatow, both Jews. Segel credited Apatow with changing his life by teaching him how to act and write.

“It was really special. Everybody was kind of like digging deep into what it feels like not to feel comfortable,” he said.

Segel said he later spearheaded and co-wrote “The Muppets” movie in 2011 because the puppets’ message appealed to him as a kid and he wanted to share it with a new generation.

“I felt like one of the things The Muppets did that was really unique and special is they never made fun of people, they never got laughs at other people’s expense,” he said. “They’re a frog and a bear and Gonzo’s a whatever, and they all kind of come together. And I felt like you can catch a kid at a certain age and instill this idea that it’s OK. Whatever you are is OK.”

An alcoholic who quit drinking a couple years ago, Segel said that when he got the script for “The End of the Tour,” he could relate immediately to Wallace, the pioneering author of the postmodern novel “Infinite Jest.” Wallace committed suicide in 2008.

“At this point in my life, it felt like kismet when we started shooting,” Segel said. “I’m like a year and a half sober at that point and [“How I Met Your Mother”] was coming to an end, and I was at a real moment of ‘what do I do now?'”

On working with Jewish co-star Jessie Eisenberg, who plays Rolling Stone reporter David Lipsky in “The End of the Tour,” Segel said, “It was the most intimate experience I’ve ever had acting.”

The film relies heavily on Lipsky’s transcripts from interviewing Wallace over the final five days of his book tour for “Infinite Jest.” He never published the profile he set out to write.

Segel said he and Eisenberg would drive together to the set and go over their scenes in the morning, act “against each other” all day and then drive home together at night and reflect on the day. After a late-night doughnut, they would wake up and do it all again, he said.

“The End of the Tour” opened nationwide Friday. Segel has surprised naysayers by earning critical acclaim for his performance. Apparently he still doesn’t fit neatly into any one box.