(AJNews) – Jewish Studies Week at the University of Alberta in Edmonton will be held from March 7 – 13, 2022 with an exceptional roster of programs. 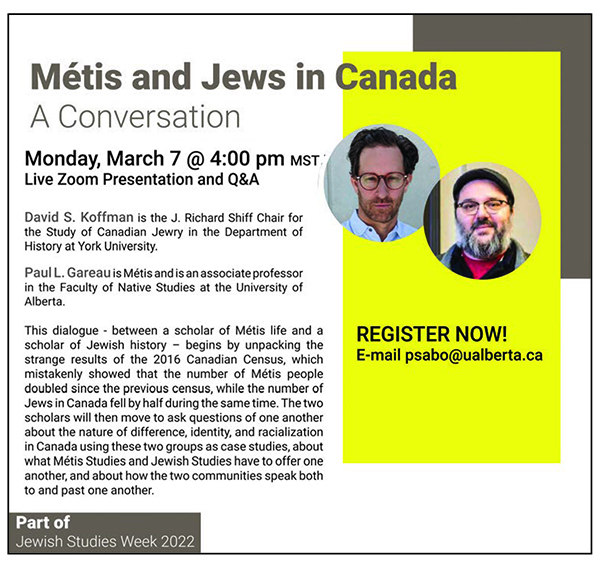 The Wirth Institute for Austrian and Central European Studies is presenting a very special exhibition featuring stories of the Kindertransport in collaboration with the Austrian Embassy, the British High Commission and the Centre for Holocaust Education and Scholarship in Ottawa. The photography project Für das Kind /For the Child by curators Rosie Potter and Patricia Ayre presents and revisits the moving and dramatic history of the Kindertransport to Great Britain, which saved the lives of thousands of Jewish children from Germany, Austria and former Czechoslovakia from Nazi persecution.

Potter and Ayre asked survivors to share the personal belongings that accompanied them as children on the Kindertransport. Very often these objects represent the last physical contact the children had with their parents. The photographs presented in the exhibition convey the deep emotions and trauma of the separation but also the hope of survival and start of a new future.

The exhibit will be on display from March 1 – 15 at the Tory/Business Atrium. Entry to the exhibit is free and open to the public during regular building hours.

On March 7, a special conversation will take place via Zoom at 4 pm. The topic is Metis and Jews in Canada and features Metis scholar Paul Gareau, an associate professor in the Faculty of Native Studies at U of A and David Kauffman, Richard Shiff Chair for the Study of Canadian Jewry in the Department of History at York University.

This dialogue between the scholars begins by unpacking the strange results of the 2016 Canadian Census, which mistakenly showed that the number of Métis people doubled since the previous census, while the number of Jews in Canada fell by half during the same time. Gareau and Kauffman will then move to ask questions of one another about the nature of difference, identity, and racialization in Canada using these two groups as case studies, about what Métis Studies and Jewish Studies have to offer one another, and about how the two communities speak both to and past one another. 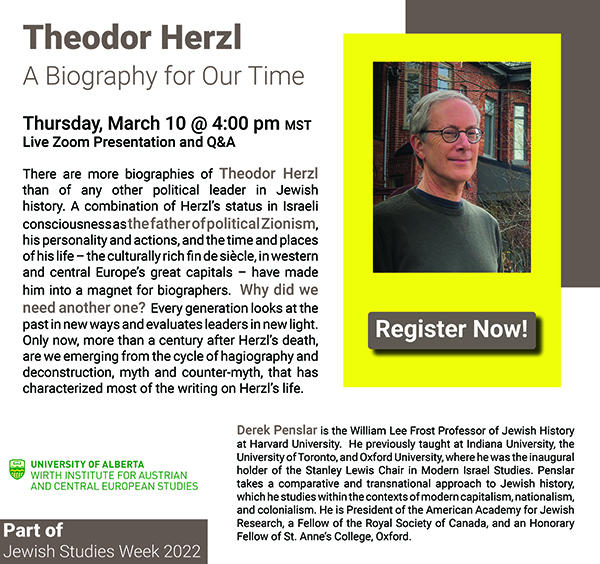 On March 10, at 4 pm MST, the University of Alberta presents the 2022 Tova Yedlin Lecture, a live Zoom webinar and Q&A with Professor of Jewish History at Harvard University Derek Penslar.

Professor Penslar takes a comparative and transnational approach to Jewish history, which he studies within the contexts of modern capitalism, nationalism, and colonialism. He recognizes that there are more biographies of Theodor Herzl than of any other political leader in Jewish history. A combination of Herzl’s status in Israeli consciousness as the father of political Zionism, his personality and actions, and the time and places of his life – the culturally rich fin de siècle, in western and central Europe’s great capitals – have made him into a magnet for biographers.

However he believes that every generation looks at the past in new ways and evaluates leaders in new light. Only now, more than a century after Herzl’s death, are we emerging from the cycle of hagiography and deconstruction, myth and counter-myth, that has characterized most of the writing on Herzl’s life. Penslar notes, “In keeping with recent trends in cultural history, which interrogate the relationship between affect and intellect, reflection and action, subjectivity and interaction, I have aspired to write a holistic biography of Herzl – holistic in terms of not only Herzl’s persona, but also in terms of how he was perceived by others, and how others’ perceptions of Herzl shaped Herzl’s own sense of self and agency. All being is social being, and political leadership depends upon, and responds to, its following. These truisms are especially relevant for Herzl, a man possessed of an extraordinarily frail ego and labile selfhood.  My biography of Herzl shuns a “great man theory of history” precisely because such an approach does not allow access to the secrets of Herzl’s greatness.”

On March 13 at 7 pm Dr. David Koffman returns for a webinar presentation that will examine what Jewish and Indigenous peoples’ interactions have looked like in Canada, exploring how this connects with Canada’s history of colonialism. This is certainly a timely discussion, when an increasing number of unmarked graves near former Indian Residential Schools are being uncovered and more attention is being paid to the brutal treatment suffered by the Indigenous survivors of the schools.

In addition to being a professor at York University, David S. Koffman is the author of The Jews’ Indian: Colonialism, Pluralism, and Belonging in America (Rutgers University Press, 2019), No Better Home? Jews, Canada, and the Sense of Belonging (University of Toronto Press, 2021) and serves as the editor-in-chief of the journal Canadian Jewish Studies/Études juives canadiennes.

This webinar is being jointly sponsored by the Jewish Federation of Edmonton, Temple Beth Ora and the University of Alberta. Register at jewishedmonton.org.

Be the first to comment on "Jewish Studies Week at UAlberta: March 7-13"