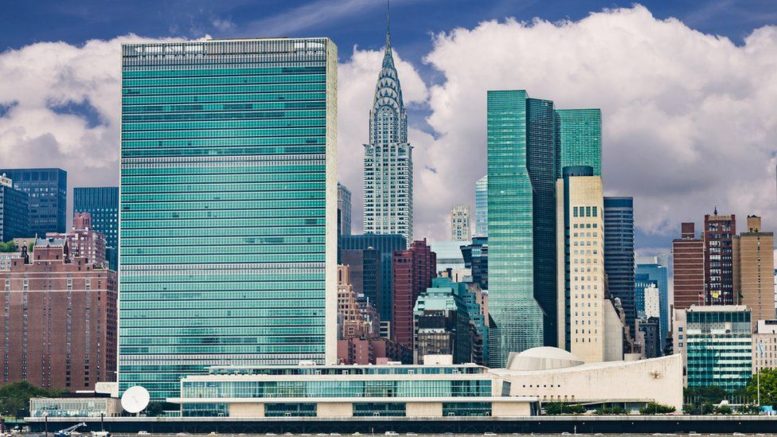 The headquarters of the United Nations in New York City (BBC)

OTTAWA – B’nai Brith Canada joined with The Centre for Israel and Jewish Affairs (CIJA) and Friends of Simon Wiesenthal Center (FSWC) in expressing deep disappointment with the Canadian government’s decision today to vote in favour of a U.N. General Assembly resolution that affirms Palestinian self-determination, while failing to affirm Jewish self-determination in the indigenous and ancestral homeland of the Jewish people, intentionally erasing historical Jewish connections to Jerusalem – including the Western Wall, Judaism’s holiest site.

“In its Explanation of Vote (EOV), Canada detailed the many shortcomings of this resolution, and the unfair targeting of Israel – yet Canada then proceeded to vote in favour of the text. That decision is not only contradictory, it flies in the face of Canada’s principled opposition to other resolutions in the unbalanced Question of Palestine basket of resolutions that are tabled annually at the U.N. General Assembly. We must ask ourselves: does support for this resolution bring us any closer to a durable and sustaining peace?” observed Michael Mostyn, Chief Executive Officer of B’nai Brith Canada.

Michael Levitt, President and CEO of FSWC, stated, “We are dismayed by Canada’s decision to undermine its longstanding policy of rejecting one-sided and prejudicial anti-Israel resolutions at the UN. By supporting this resolution, Canada is providing ammunition to those who seek to delegitimize and demonize the State of Israel, which ultimately sets back the prospects for peace in the region.”

Beginning in 2004, Prime Minister Paul Martin and Foreign Minister Pierre Pettigrew announced the GOC’s intention to review and re-calibrate Canadian votes at the UNGA due to the excessive and unhelpful language used and the singling out of Israel. Prime Minister Stephen Harper and Foreign Minister John Baird accelerated that process and adopted a policy of uniform rejection of all resolutions in the Question of Palestine resolutions tabled annually at the UN General Assembly.

Under the leadership of Prime Minister Justin Trudeau, the Government of Canada entrenched this policy during his first term in Government from 2015-2019.

Canada departed from this established policy last year, triggering widespread disappointment and anger within the pro-Israel community – especially in light of assurances expressed by multiple Liberal candidates during the 2019 Election Campaign that a re-elected Liberal government would stand firm and maintain its comprehensive rejection of all relevant UNGA resolutions.

Shimon Koffler Fogel, CIJA President and CEO commented: “The Government of Canada has now doubled-down on its incomprehensible support for a resolution that simply expands the anti-Israel narrative within the United Nations system – an aberration in the voting pattern established and re-affirmed by successive Canadian governments for almost two decades until the Liberal government changed its vote last year. Notwithstanding other praiseworthy initiatives, including the Security Infrastructure Program and the renewal and expansion of the Canada-Israel Free Trade Agreement, this vote will undermine the Jewish community’s confidence in this Government – its willingness to stand by its principles as they relate to Israel, as well as its relationship with the Jewish community here in Canada.”