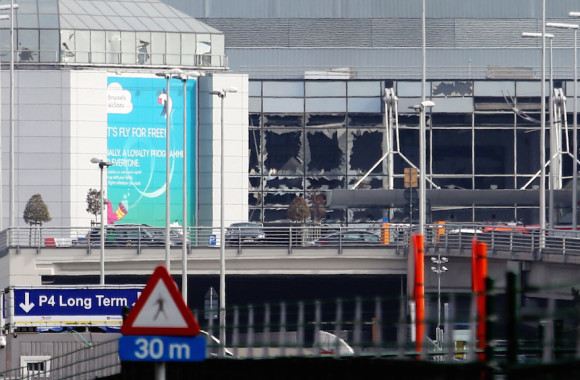 A view of bomb damage at Zaventem Airport in Brussels following a terrorist attack in the Belgian capital, March 22, 2016. (Sylvain Lefevre/Getty Images)

(JTA) — Jewish groups expressed shock and anger following a series of attacks that left at least 34 dead in the Belgian capital.

Kenneth Bandler, director of media relations for the American Jewish Committee, linked the attacks to the slaying of four people at the Jewish Museum of Belgium in May 2014.

“What began with the jihadist fatal attack on the Jewish Museum nearly two years ago has now reached the airport and metro,” he wrote in an email about the March 22 morning attacks in Brussels.

Two explosions at Zaventem Airport, including one by a suicide bomber, killed at least 14 people, and was followed by an explosion at the Maelbeek metro station, where another at least 20 died, the Het Laatste Nieuws daily reported on its online edition.

Mehdi Nemmouche, a French national in his 30s who is said to have fought with jihadists in Syria, is currently on trial in Brussels for the May 2014 museum shooting.

“This is yet another shocking, appalling and deadly attack on innocent Europeans by radical terrorists,” European Jewish Congress President Moshe Kantor said in a statement. Kantor called the attacks “shots at the heart of Europe” that he said should galvanize counterterrorist actions.

Rabbi Pinchas Goldschmidt, president of the Conference of European Rabbis, said his organization is “united in prayers at this hour with the families of the victims and the injured.”

Goldschmidt called the attacks, whose perpetrators have not yet been publicly identified, the “latest act of war of Islamic fascism against the capital of Europe,” adding: “As in the biblical story of Esther, which will be read in all the synagogues later this week, evil can and will be destroyed only by recognizing it and fighting it.”

Sources from a Belgian intelligence agency said the attacks may have been carried out as revenge for the arrest Friday in Belgium of Salah Abdeslam, a 26-year-old French Islamist whom authorities suspect had a key role in a series of deadly attacks that killed 130 people in Paris in November. An unnamed intelligence source told the Het Laatste Nieuws daily that the attacks must have been planned a long time ago but may have been carried out earlier than planned to retaliate for the arrest.
In addition to the 34 people reported killed, dozens were injured in both attacks.

Police advised civilians to remain indoors. Public transportation and flights to and from Zaventem were suspended.

Islamic State has claimed responsibility for the attacks, saying it was in response to Belgium’s participation in the U.S.-led coalition fighting against the group.

Among the wounded was an Israeli citizen who resides in Antwerp and was in Brussels for a wedding, according to Rabbi Pinchas Kornfeld, a community leader from Antwerp. He sustained injuries to his legs but is not in life-threatening condition, Kornfeld said.

Another Jewish person was moderately wounded, according to Samuel Markowitz, a paramedic for Hatzoloh, a local Jewish emergency services organization. Several dozen Jews were among the hundreds of passengers who were evacuated to a safe area near the airport, he added in an interview with the Joods Actueel Jewish monthly.

Shortly after the attacks, the Antwerp World Diamond Center canceled a Purim party it planned for tomorrow “out of respect for the victims and their families,” the center’s CEO, Ari Epstein, told Joods Actueel. Another Purim party by the European Jewish Association was canceled in Brussels, the group’s director, Rabbi Menachem Margolin, said.

The airport attack occurred at 8 a.m. near the American Airlines desk, according to the online edition of Joods Actueel. Kornfeld said many Jewish passengers were traveling between Antwerp, which has a large haredi Orthodox community, and New York.

“It was the right time and place to produce many Jewish casualties,” he said.

Le Soir reported that two explosions ripped through the airport. A federal prosecutor said at least one of the explosions came from a suicide bomber’s explosive vest.

Recess was canceled at dozens of Jewish schools in Antwerp and children were instructed to stay inside the buildings, Kornfeld said. Community leaders are discussing the possibility of canceling school tomorrow and Purim street festivities planned for Thursday. Shortly thereafter, similar instructions went out from the Belgian government’s crisis center to all of the country’s schools. University students were instructed to refrain from coming to campus.

Witnesses told Joods Actueel that at the airport, they heard shouts in Arabic, gunshots and a massive explosion that tore through the ceiling and produced a thick cloud of white smoke and dust as hundreds of people fled from buildings there.

Be the first to comment on "Jewish groups denounce Brussels attacks: ‘Shots at the heart of Europe’"