Submitted by the Jeromy Farkas for Mayor Campaign

He is asking to be Calgary’s next mayor.

“With a proven track record of standing up for Calgarians and always putting the interests of Calgarians and businesses first, I’m Calgary’s best choice to put our great city back on top,” says Jeromy. 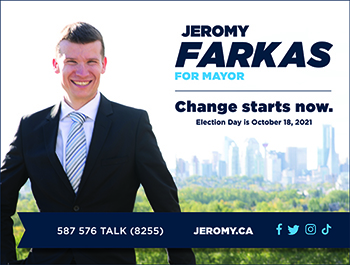 “My fresh, new brand of leadership will get Calgarians back to work, get City Hall’s budget under control, give Calgarians better value for their money and usher our city into a new era of opportunity and prosperity.”

Jeromy’s platform is based on economic growth, financial responsibility, better city services and building Calgary for the 21st Century.

We need to get Calgarians back to work, says Jeromy. “We must be unrelenting in our pursuit of economic recovery and growth. Now is the time to reclaim Calgary’s entrepreneur-friendly environment and show the world that we are open for business. Positive change begins with reining in taxes, simplifying approvals, eliminating unnecessary red tape and allowing entrepreneurs to succeed. We need to ensure that our youth and small businesses are given no reason to seek opportunity elsewhere.”

City Hall must get its budget under control, adds Jeromy. “Council must follow the lead of families and entrepreneurs who have made sacrifices through these challenging times. Wiser spending and giving Calgarians tax breaks must start now. Calgarians deserve a financially responsible municipal government, especially during unprecedented times like this COVID-19 pandemic. We must focus on need-to-haves over nice-to-haves.”

Calgarians deserve good value for their money, explains Jeromy. “Every Calgarian deserves a safe and inclusive city. We need a high-performance government that will deliver City services efficiently. Over the past ten years, property taxes have nearly doubled, and many new fees have been introduced. Meanwhile, service has only marginally improved in some areas, whole others have been significantly reduced. City Hall must focus on core services such as an affordable city-wide transit system, well-maintained infrastructure, efficient snow clearing and emergency services such as police and fire. We must leverage technology and foster innovation to achieve efficiencies in these areas.”

Calgary must be bold, welcome new ideas, and build for the future, concludes Jeromy. “We must embrace new technology in delivering services, building quality infrastructure, and creating a vibrant downtown core that will usher in a new era of opportunity. We need to update existing infrastructure that is in disrepair and has been overlooked for far too long. We must focus on projects that will enhance our city’s safety and competitiveness, such as re-opening a downtown police station and building an LRT extension to the airport. We can improve accountability at City Hall by genuinely listening to Calgarians and allowing them to have meaningful input in major decisions that impact them, such as neighbourhood development.”

Jeromy was elected to Calgary City Council in 2017 with the promise to bring financial responsibility, integrity, and accountability back to City Hall. He wasted no time in leading by example when he declined his generous council pension and transition allowance. Jeromy’s record demonstrates his commitment to standing up for everyday Calgarians and businesses. A lifelong Calgarian and University of Calgary graduate, Jeromy has worked hard for everything that he has. He was proudly raised in the SE community of Dover by Hungarian immigrants who came to Canada to build a better life for their family.

This is a paid post by the Jeromy Farkas for Mayor Campaign.