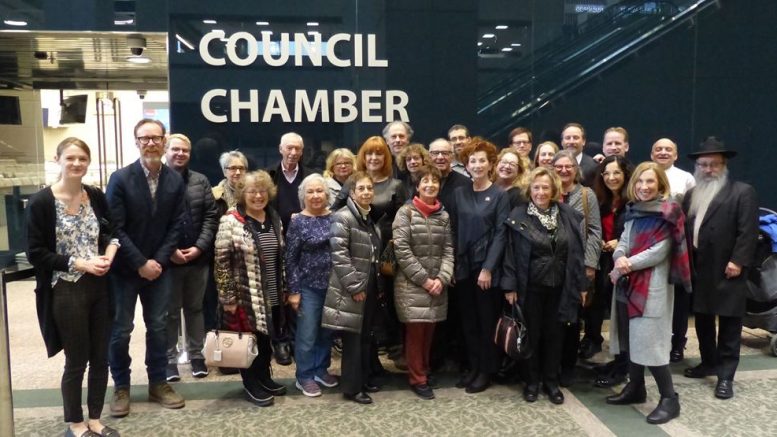 January 27, the anniversary of the liberation of Auschwitz, was recognized by the United Nations as International Holocaust Remembrance Day in 2005.

Those observing the emotional proceedings included Holocaust survivors, their children and grandchildren, 58 students from the Calgary Jewish Academy, and community leadership.

Calgary is among the first municipalities to officially adopt January 27th as a day of Holocaust remembrance. Jared Shore, Community Relations Chair of Calgary Jewish Federation, was very pleased with the passage of the motion.

“This is affirmation that our city leadership understands the concern about growing antisemitism,” he said.

The motion was introduced by Councillor Diane Colley-Urquhart, who has been working for a year with Calgary Jewish Federation and CIJA on drafting the motion and confirming the support of her colleagues on City Council.

In a way, this motion is her own personal response to the Pittsburg synagogue bombing and other acts of antisemitism.

“When a synagogue is bombed in another part of the world,” she told Council, “we have to speak up here.”

In her opening remarks to City Council, Councillor Colley-Urquhart mentioned some of the “whereas” points preceding the motion, including the distressing statistic that “one in five Canadian youth are unaware of the events that occurred during the Holocaust, while 62% of Canadians aged 18-34 are unaware of how many Jews were killed during the Holocaust.” This, in addition to the fact that “Statistics Canada reports that Jewish people are the most frequently targeted ethno-cultural group when it comes to police-reported hate crimes.”

The motion was sponsored by 13 of the 14 City Councillors and Mayor Nenshi, who spoke in support of the motion at the November 18 meeting.

Citing the increase in hate crimes and the lack of awareness of the Holocaust, Mayor Nenshi stressed that elected officials must “use our voices and power in order to fight against hatred.”

Originally, the motion, which is titled “Combatting Antisemitism in the City of Calgary” included adoption of the International Holocaust Remembrance Alliance definition of antisemitism, which has been adopted by countries around the world, including Canada. The definition includes examples of antisemitism, including some examples which attempt to define where demonization of Israel becomes antisemitic. When the first draft of the motion was made public, Councillor Colley-Urquhart and other Councillors received over 100 e-mails objecting to the inclusion of the IHRA definition. Some of the opposition came from an organization called Independent Jewish Voices.

It was important to Councillor Colley-Urquhart that the motion pass unanimously, and with no controversial debate in council, so she decided to remove the definition from the motion. However, mention of the IRHA definition is included in whereas #8 of the motion, which states: “Antisemitism can only be overcome by education, increased awareness, strong political condemnation, and enforcement of relevant laws anchored in the IHRA definition as a clear means of identifying hatred toward Jews.”

For her part, Councillor Colley-Urquhart has not given up on official recognition of the IHRA definition. To that end, she introduced an Administrative Inquiry to City Council, which includes the full definition and the examples adopted by the Federal Government of Canada, and requests that administration research and consult with various stakeholders on the  “merits and value of the City of Calgary adopting the International Holocaust Remembrance Alliance (IHRA) non-legally binding working definition of antisemitism.” Administration is asked to report back to Council in 2020.

For many in the Jewish community, the City’s recognition of January 27 as an annual day of Holocaust Remembrance is an important and memorable event.

“This connects our past to our future, right here in our local environment, in our Calgary community,” concluded Jared Shore.

And when January 27 rolls around in 2020, it will be commemorated as a city-wide day of remembrance, acknowledging the Holocaust and renewing our commitment to learn the lessons of this dark period of human history.