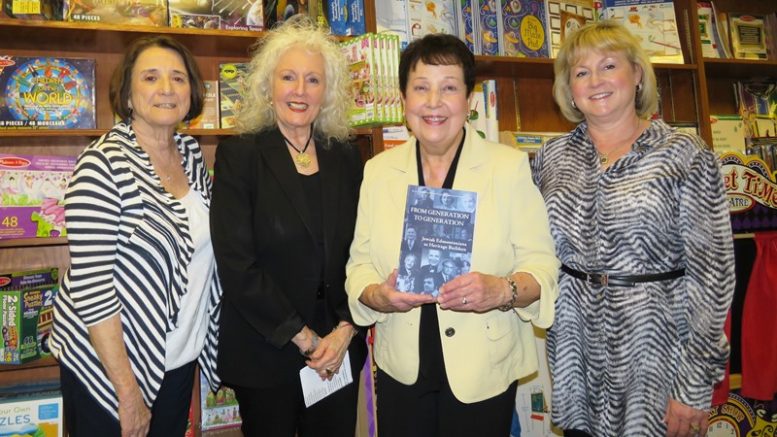 On May 1, the Jewish Archives and Historical Society of Edmonton and Northern Alberta launched a new book about historic Jewish Edmontonians. Members of the editorial board are Jini Vogel, Gillian Horwitz, Judy Goldsand, Debby Shoctor and (missing from the photo) Anita Sky. Photo by Edmonton Jewish News

(EJNews) – On Sunday May 1, a group of dedicated community members gathered at Audrey’s Books to celebrate the launch of a new book by JAHSENA – the Jewish Archives and Historical Society of Edmonton and Northern Alberta. The new release, the second by JAHSENA, is entitled From Generation to Generation: Jewish Edmontonians as Heritage Builders.

The book is a celebration of a remarkable group of twenty-five historic individuals who made outstanding contributions to the Jewish community –  and also to the city of Edmonton – in all areas of its development. It is well written and easy to read and it is a testament to many of the extraordinary role models who were leaders of the Jewish community and who in addition to their professional work, enhanced life for all Edmontonians. 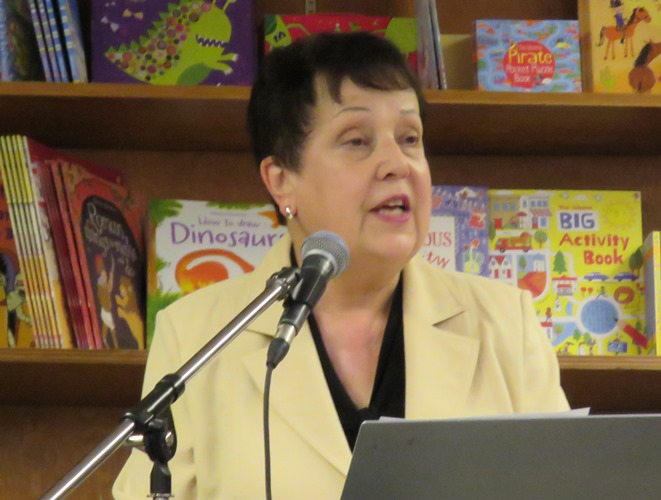 When viewed individually, the reader is easily impressed with the dedication of each person; as a collective, the reader can’t help but feel the enormity of the Jewish contribution to our city.

Before giving an overview of From Generation to Generation, JAHSENA president Judy Goldsand explained that the society’s objectives are to collect, preserve and make accessible for public benefit, the history and artifacts of the Jewish people of Edmonton and Northern Alberta.

She singled out the important contributions of Paul Gifford, the book’s primary writer as well as members of the Editorial Board which include herself, Gillian Horwitz, Anita Sky, Jini Vogel, and Debby Shoctor, a former JAHSENA archivist who also authored a chapter of the book.

According to Goldsand, the editorial board decided to write short stories about these individuals encompassing their well-known accomplishments, as well as little known anecdotes about their lives.

Goldsand explained, “Our book will tell you about the first Jewish men to settle in Edmonton, Abe Cristall and Boss Diamond, and the friendly rivalry between them. When they both established men’s wear stores, Boss Diamond came up with the clever slogan something like: Why buy from Cristall when you could deal with Diamond?” 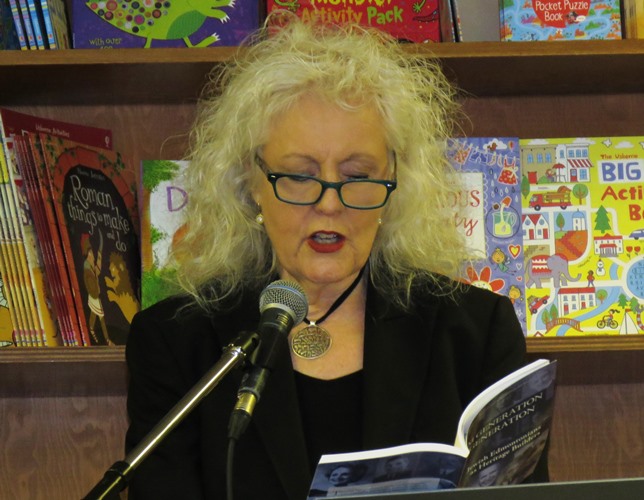 Editorial board member Gillian Horwitz read an excerpt from the new JAHSENA book “From Generation to Generation: Jewish Edmontonians as Heritage Builders.”

In this book you will find out why prominent lawyer, Abe Miller, was called ‘Machine Gun Miller,’ teased Goldsand. She said the book also contains the following anecdotes:

“Did you know that well-known consumer commentator Ethel Marliss, in her early years, was seen to approach shoppers in the cosmetics department of stores and tell them they did not need to buy the $25 face cream – the $5 cream would do the same job.

“Some of you might be curious about why beloved family doctor Harry Weinlos often arrived at friends for dinner minus his overcoat, or hat, or scarf or gloves?

“U of A Professor Henry Kreisel, an internationally respected writer of Canadian literature, set some of his stories in Edmonton. When he was invested in the Order of Canada in 1989, the irony was noted that someone who was brought to this country as a prisoner-of-war could go on to become  one of its most distinguished citizens.

“Of course Henry Singer was well-known for his premier men’s clothing shop, but did you know that Henry was also a musician, a song writer, an author, a skilled photographer, and, along with Moe Lieberman, Joe Shoctor and Walter Sprague, and others, was instrumental in re-establishing the Edmonton Eskimos in 1949.

“Joe Shoctor, besides being a prominent lawyer, was, as you know, a theatre buff, and produced plays on Broadway. How grateful we should be that he returned to Edmonton to found the Citadel Theatre which has given Edmontonians the opportunity to see first-class professional theatre for the past 50 years.

“And of course we all know Tevie Miller – prominent lawyer, Associate Chief Justice for the Court of Queen’s Bench; and a passionate supporter of the University of Alberta where he served as the Chancellor from 1986 to 1990.    But did you know that he was a board member of Edmonton Eskimos through three Grey Cup championships and was the only sitting Judge to wear a Grey Cup ring?” 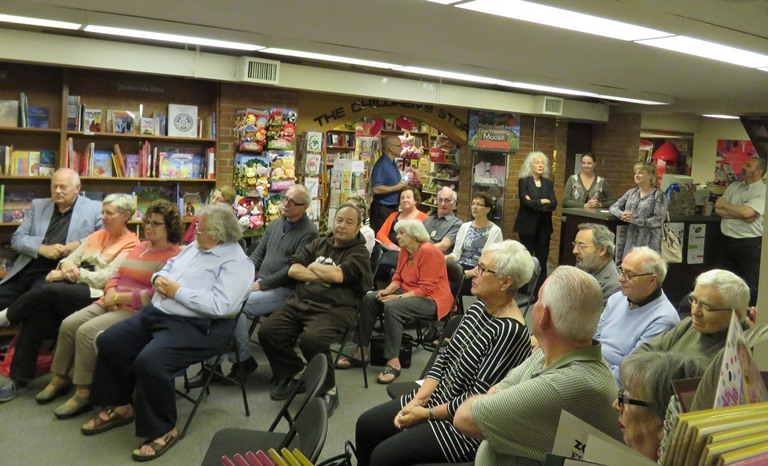 An appreciative crowd gathered to celebrate the launch of JAHSENA’s new book on May 1.

“We also wanted to tell you about the contributions of two grass-roots volunteers, Bessie Goldstick and Alfie Simons,” added Goldsand.

Bessie was a committed volunteer all around the city.  For years, it was a common sight to see her serving lunch at the Bissell Centre, and she was also a champion of the school lunch program in the inner city.

Alfie Simons volunteered with a variety of charitable organizations sponsored by different faith groups, and in his retirement was happiest when he was cooking – which he did for the Robertson-Wesley United Church community dinners as well as for the Jewish Seniors Drop-In Centre.

“These are only some of the stories that we hope will both inform and entertain you as you read From Generation to Generation: Jewish Edmontonians as Heritage Builders,” concluded Goldsand.

Before adjourning for the afternoon, Goldsand introduced some special guests in attendance: Ken Tingley, Edmonton’s first historian laureate who read an early draft of the book and is quoted on the back cover; Dale Youngman, of PageMaster Publications (and his designer Jennifer) who developed and published the book and Chris Chang-Yen Phillips, Edmonton’s current historian laureate.

She also thanked the supporters of the JAHSENA publishing campaign as well as Edmonton Heritage Council and the Jewish Federation of Edmonton for further support towards the writing of the book.

From Generation to Generation: Jewish Edmontonians as Heritage Builders is a must read for anyone with an interest in the history of Edmonton and / or the unique contributions of our Jewish ancestors. It is available for sale from the JAHSENA office at 780-489-2809 or jahsena@shaw.ca.