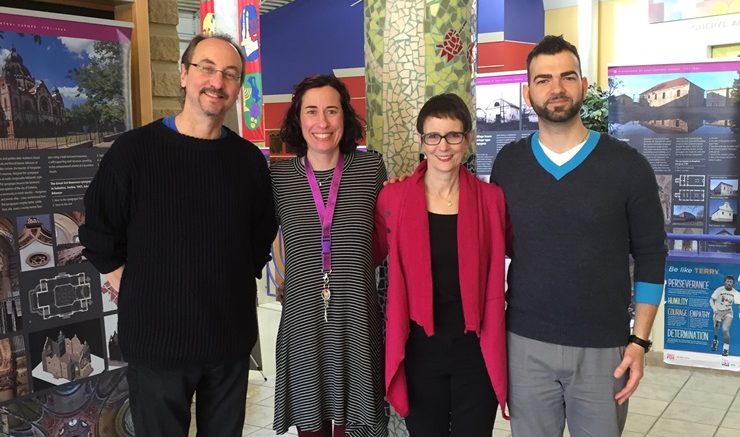 (EJNews) – “Synagogues of East-Central Europe 1782-1944” is an internationally acclaimed touring exhibit sponsored by the Hungarian Embassy in Ottawa, full of history and culture. Such a collection of scholarly treasures would certainly only be found in a museum, a gallery or perhaps a university.  But for two weeks in March this world-class exhibit was housed in none other than our very own Talmud Torah School!  Following its run at the Wirth Institute for Austrian and Central European Studies (University of Alberta) the collection graced the foyer and library of Talmud Torah, transforming the entrance into a vivid walk through history.

Generously provided by the Hungarian Embassy, this exhibition of photography is “a journey in space and time, displaying aspects of Jewish life and its economic and cultural flourishing within multi-national empires,” states Peter Kirschner (President of the Hungarian Jewish Cultural organization).  But a school full of children was certainly not the originally targeted audience.  What could kids ranging in age from 5-15 really gain from a presentation designed for adult patrons? 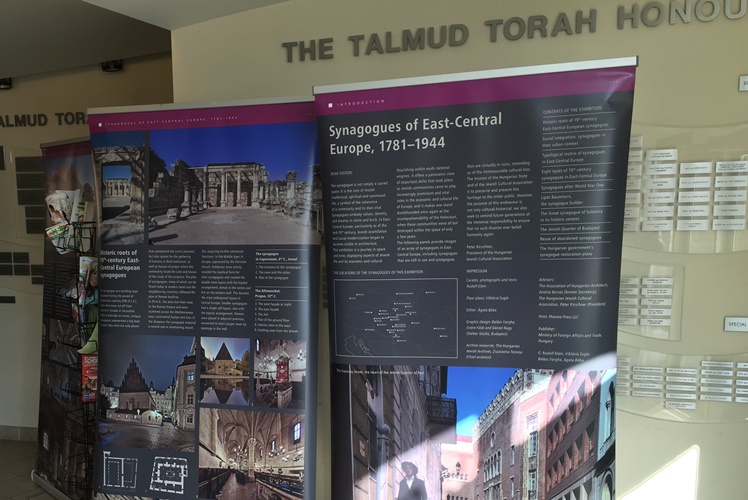 Part of the beautiful display of “Synagogues of East-Central Europe 1782-1944” that graced the foyer of Edmonton Talmud Torah School for two weeks in March.

“I thought that because it was very visual, with lots of beautiful photography, it might be appealing to younger schoolchildren. It could also help them think about what a synagogue is and how they can be designed to look so many different ways,” says Professor Joseph Patrouch, director of the Wirth Institute.  In fact, it both appealed to and captivated classes of students as their teachers filed them past each piece.  It was striking how varied their reactions were – some stared intently, some spotted similarities between their own shuls and the grand opulence of those in the photographs; others were seized by images of destruction and fell instantly speechless.

Later, a four-year-old girl stopped and asked me, “Are these pictures of Israel?”  I told her they were not, and explained that the pictures came from many places – Hungary, Czech Republic, Slovakia, just to name a few.  She looked confused, “Jews live in those other places too?” she asked me.  Her mother then joined us and followed her daughter’s gaze to the ornate bima of Prague’s Old New Synagogue.  “I’ve been there,” she said enthusiastically, and her daughter’s eyes widened further.  Then with excitement and curiosity the little girl switched to Hebrew and began peppering her mother with questions.

Principal Judith Boyle, of Talmud Torah School, very correctly pointed out that this exhibition was not only significant for the unique and enriching experience it provided to the children, but it also resonated deeply with the educational faculty and staff. Many of them were able to trace their own lineages to the Central European towns and cities depicted in the photographs.

Through the kindness of the Wirth Institute, Talmud Torah’s students were able to get to know these powerful images over several days – becoming more and more familiar with the complex and striking significance of the exhibit each time they walked into the school.  Such a shared endeavour as this – spearheaded by Professor Patrouch and his Wirth Institute colleagues – is one that should be showcased and celebrated.  This extension of generosity has paved the way for future intellectual exchanges and scholarly opportunities for our young budding intellectuals.

Founded in 1998 the Wirth Institute has demonstrated a profound commitment to the preservation of Jewish memory and culture – but this educational commitment is not limited to U of A students. It also welcomes the greater Edmonton Jewish community, including — as we have seen — our youngest members.  Since 2007 the Tova Yedlin Lecture Series has brought world renowned scholars from all corners of the globe to publicly lecture on topics concerning Jewish life in Central Europe during the 19th century.  Since 2004 the Toby and Saul Reichert Holocaust Lecture Series has proudly presented lectures on Holocaust education.  And most recently the Wirth Institute founded the Rudolf Vrba Holocaust Reading Room which houses a collection of rare books and archival materials and is even open to members of the general public upon appointment.

Needless to say, with the Wirth Institute’s dedication to Jewish Studies – both research and education – our Talmud Torah students can potentially access an incredible resource to better understand their heritage from a scholarly perspective, augmenting the comprehensive Jewish education they receive at school.  After the retirement of the University of Alberta’s last professor of Jewish Studies, it is both reassuring and comforting to see that the Wirth Institute has put such emphasis on both Jewish history and Holocaust memory preservation.  In fact Professor Patrouch was even a visiting professor at the Hebrew University of Jerusalem in 2014, and has since been working diligently on strengthening opportunities for scholarly exchange and cooperation between HUJ and the U of A.

This newly forged relationship between Talmud Torah community and the Wirth Institute has tremendous potential to further our children’s already rich educational experience – to inspire them to ask questions, and learn how to appreciate the academic search for answers.  I don’t know if that little four-year-old girl will remember the passion with which she started asking her mother about Prague’s Old New Synagogue, or if those older students who visited the exhibit with their teachers grasped the magnitude of what this collection of photographs symbolizes for the Jewish world.  As the sombre day of Yom Ha’Shoah grows closer, I doubt there is anyone who can ignore the colossal importance of preserving Jewish history and culture – and the continued efforts of the Wirth Institute aims to do just that.

As Peter Kirschner assures, “We also seek to remind future generations of the immense responsibility to ensure that no such disaster ever befall humanity again.”