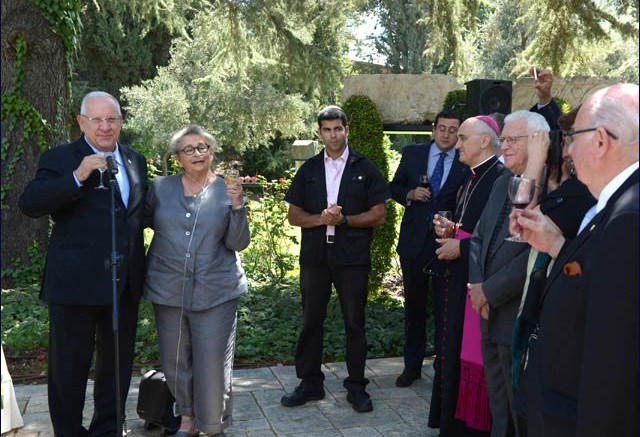 Israel's President and First Lady with their guests in the Presidential garden, raising a toast to the New Year.

On August 31, 2015, President of Israel Reuven and First Lady Rivlin hosted foreign ambassadors and members of the diplomatic corps based in Israel, representing over 100 countries, for a reception held at the President’s Residence, in honor of Rosh Hashanah, the upcoming Jewish New Year.

The President spoke of his concern regarding Iran. He said, “Iran continues to threaten stability in the region and around the world. Their backing of terror, in Lebanon, Syria, Yemen, and Iraq, makes Iran’s nuclear ambitions, truly terrifying ­ not just for Israel, but for all. It cannot be that with one flick of a pen, Iran becomes a member of the club, and instead the world turns to single out the victim of Iran’s aggression. It cannot be that in one moment of diplomacy the reality is changed so completely. We know too well that real political change requires education, confidence building, and dialogue. None of which can happen overnight.”

The President concluded by wishing his guests a happy and healthy New Year and noted, “Israel knows of course, that we have many friends who understand our concerns, and care for our joint futures.”

Dean of the Diplomatic Corps, Ambassador of Cameroon, H.E. Mr. Henry Etoundi Essomba, who also addressed the event, thanked the President and First Lady for their warm welcome and hospitality, and expressed his warm wishes for all Israel and the Jewish people for a happy new year. He spoke of the significant challenges the world has faced over the past year, and his hope for a better year to come.

He said, “In this moment of celebration, we must also acknowledge the reality that the past year has been a challenging one for the entire world, with regard to security, economy, and humanitarian and ecological crises which have shaken the world throughout.”

Ambassdor Essomba added, “On the humanitarian front, Israel can be proud to belong to a coalition of countries always prepared to assist people facing humanitarian crises around the world ­ as was the case after the earthquake in Nepal.”

After the addresses, the President and First Lady joined their guests in the Presidential garden, where they raised a toast to the New Year, wishing them all a very happy and healthy New Year.