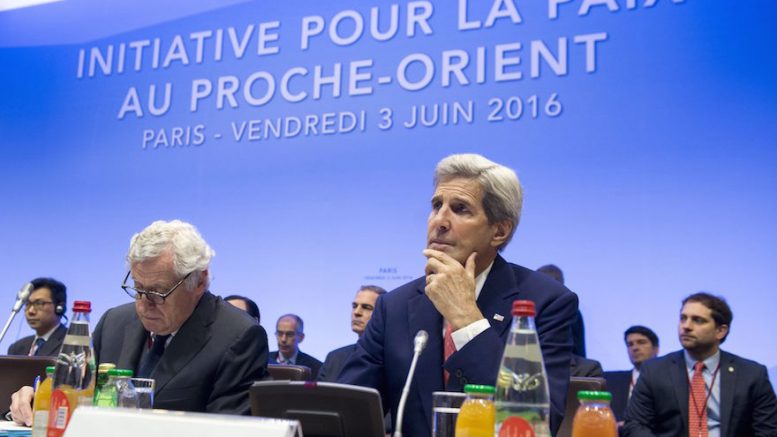 Yet peace plans have been coming at the region from all sides. No less than three Israeli-Palestinian peace proposals have been put forward in recent weeks, spanning a range of countries, leaders and organizations.

So is peace in the offing, or is it all talk? Here are the plans on the table, what Israel and the P.A. are saying and why these efforts are coming together now.

The Paris summit that took place on June 3 was more than a year in the making. It was based on the idea that after more than two decades of inconclusive direct talks between Israelis and Palestinians, it was time for the international community to take a more active role. Nearly 30 countries attended the summit; neither the Israelis nor the Palestinians were invited.

It ended after five hours with a statement asking the Israelis and Palestinians to demonstrate “a genuine commitment to the two-state solution in order to rebuild trust.”

France, which organized the meeting, plans to convene another conference including Israel and the Palestinians by year’s end. But while the P.A. has praised the initiative, Israel has demurred, saying the only way to peace is through direct talks. Israel objects in particular to a French pledge to recognize a Palestinian state should talks fail.

Sissi’s initiative, reported last week in the Israeli publication Ynet, may be more promising. Sissi hopes to organize a tripartite meeting of Egypt, Israel and the P.A. to restart talks. Israel views Sissi as a trusted security partner, and he’s an ally of Abbas — so he could be better able to coax both sides back to the table.

On May 17, Sissi gave a speech urging relaunched negotiations. Egypt didn’t want to lead the initiative, he said, but would “make every effort” to reach peace.

A third push, meanwhile, has come from a coalition of American and Israeli military officials hoping to reassure Israelis that a Palestinian state would not degrade their security. They see Israeli security fears as one of the primary obstacles to peace.

The plan by Commanders for Israel’s Security, a group of pro-peace former generals, calls for Israel to complete its security barrier around the West Bank, freeze settlement construction outside the barrier and provide incentives for settlers outside it to relocate within Israel. The plan calls on Israel to forfeit sovereignty over the West Bank and acknowledge that sections of eastern Jerusalem will be part of a future Palestinian state.

A parallel plan from the Center for a New American Security focuses on the details of security arrangements in a future Palestinian state. It calls for a phased Israeli withdrawal from the West Bank based on a timetable and benchmarks. It would also place an American security force in the Jordan Valley, the border between the West Bank and Jordan.

Both the CIS plan and the CNAS plans were promoted by the Israel Policy Forum, a group of Jewish community leaders aiming to build support for a two-state solution.

Netanyahu and Abbas both say they’re ready — but won’t meet.

Netanyahu and Abbas have not met formally since 2010. Each insists he is not the obstacle to another round of talks. Netanyahu has called several times recently for direct talks and welcomed Sissi’s speech. He offered qualified praise for the Arab Peace Initiative, a 2002 Arab League proposal that calls for full relations with Israel in return for a Palestinian state, Israeli withdrawal from the West Bank and Golan Heights, and a negotiated solution for Palestinian refugees.

“The Arab Peace Initiative includes positive elements that can help revive constructive negotiations with the Palestinians,” he said Sundayat the Knesset, Israel’s parliament. “We are willing to negotiate with the Arab states revisions to that initiative so that it reflects the dramatic changes in the region since 2002, but maintains the agreed goal of two states for two peoples.”

Abbas also says he is committed to peace. Gershon Baskin, an Israeli who has acted as an unofficial conduit between Israel and Palestinian leaders, told JTA last month that he personally delivered three Abbas offers for direct talks to Netanyahu’s office over the past three years. Netanyahu’s spokesman denied the claim. And in a March interview on Israel’s Channel 2, Abbas said he was “prepared to meet Netanyahu anywhere, any time.”

But the leaders’ declarations haven’t led to action. Abbas refuses to meet with Netanyahu absent prior Israeli commitments or concessions. He also lacks the support of his constituents. According to a September 2015 poll, two-thirds of Palestinians demanded Abbas’ resignation.

Netanyahu, meanwhile, refuses to participate in international peace conferences, demanding only direct talks. In addition, the pro-settler Jewish Home faction, as well as many in Netanyahu’s own Likud party, oppose Palestinian statehood.

Observers worry the window for peace is closing.

Despite adverse conditions, advocates for peace say there is an urgent need for another round of negotiations. They say continued settlement growth, as well as growing disenchantment among Israelis and Palestinians, mean a two-state solution may soon be impossible to reach.

Israeli and Palestinian actions are “dangerously imperiling the prospects for a two-state solution,” said a statement released by the foreign ministers attending the Paris conference, which “underscored that the status quo is not sustainable.”

Even if talks are unlikely, detailed proposals are still important, said Ilan Goldenberg, lead author of the Center for a New American Security study. By showing Israelis and Palestinians that an agreement is still possible, he said, the study keeps the opportunity for peace alive until Netanyahu and Abbas are ready.

“Abbas and Bibi have a complicated personal relationship, and that makes this more difficult in the short term,” he said Thursday at a briefing for reporters, using Netanyahu’s nickname. “But that doesn’t mean this isn’t the solution in the long term.”

Be the first to comment on "For Israel and the Palestinians, the peace plans just keep coming"