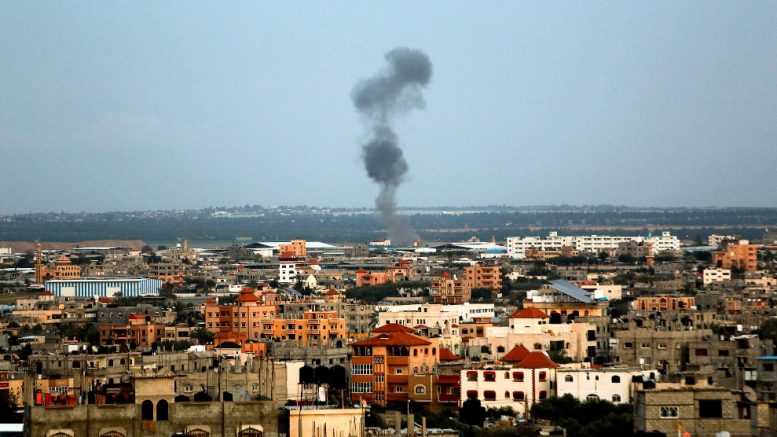 JERUSALEM (JTA) — The Israeli army began attacking Hamas terror targets in Gaza in the wake of a rocket attack by the terrorist group that leveled a house in central Israel and injured 7.

The Israel Defense Forces also sent two additional brigades to the Gaza border area – one infantry and one armored — and began a limited call-up of reservists for other units.

Sources in the Gaza Strip confirmed to Ynet that Hamas fired the rocket on Monday morning March 25, but said the terror group did not expect a massive response from Israel so close to the elections on April 9. But Haaretz reported that the steps taken in response show that Israel is preparing for a campaign likely to last several days, if not more.

Prime Minister Benjamin Netanyahu was cutting short his trip to Washington, D.C., to deal with the aftermath of the attack. Netanyahu also serves as Israel’s defense minister.

The retaliatory strikes targeted a building in Gaza City used by the Hamas internal security service and another in the northern Gaza Strip, the IDF said in a statement. The Hamas-run Health Ministry said no has arrived at Gaza hospitals for medical care in the aftermath of the strikes.

In a rare statement, regional councils in the Gaza border area told residents to expect to hear the sounds of explosives from Israeli retaliatory strikes on Gaza. Meanwhile, public bomb shelters were opened in southern Israeli communities.

“This is a serious incident of a direct hit on a private home,” Brig.-Gen. Ronen Manlis, the IDF spokesman, said in a statement. “This is a self-manufactured Hamas rocket that reaches a range of over 120 kilometers (nearly 60 miles). The launch was carried out by Hamas from one of the group’s launchpads. We see Hamas as responsible for everything that happens in Gaza.”

Additional Iron Dome missile defense systems also were deployed throughout the country. Iron Dome failed to deploy in the Monday morning attack because it was not deployed to cover the area where the rocket landed. Israel needs 13 batteries to cover the whole country, but the army operates only 10 batteries in the case of an emergency situation, Haaretz reported.

The United Nations envoy to the Middle East, Nikolay Mladenov, in a tweet condemned the rocket attack on Israel and said the situation remains very tense.

“Today’s firing of a rocket from #Gaza towards #Israel, which hit a house north of Tel Aviv and injured seven people, is absolutely unacceptable,” he wrote. “This is an extremely serious incident! #UN is working intensely with #Egypt and all sides but situation remains VERY tense.”