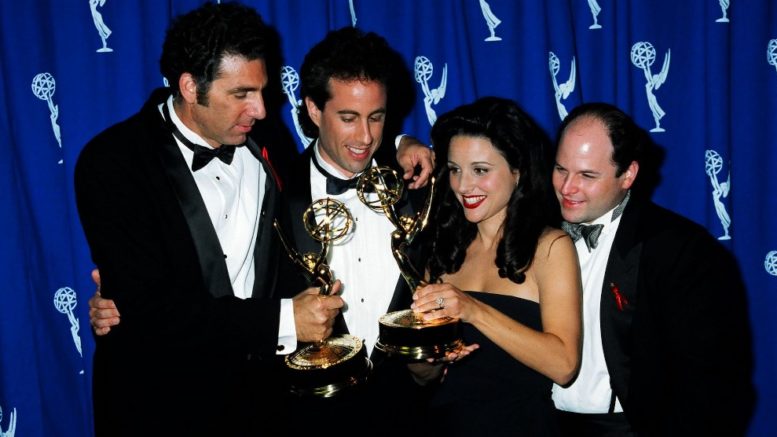 The stars of "Seinfeld" at the 1993 Emmy Awards. The show was the most popular sitcom of the 1990s. (Jeff Kravitz/FilmMagic, Inc/Getty Images)

(JTA) — A lot happened in 1989. The Berlin Wall fell, the Iron Curtain crumbled and a young political theorist named Francis Fukuyama announced that with Western liberal democracy’s triumph, we had reached “the end of history.”

Also that year, the pilot for what was then called “The Seinfeld Chronicles” aired on NBC.

While NBC was tentative initially about the show’s prospects, “Seinfeld” would become not just an unlikely hit for the network but the most popular sitcom of the 1990s. To put it in perspective, 76 million viewers tuned in for the sitcom’s 1998 series finale — that’s nearly four times the number who watched the last episode of HBO’s “Game of Thrones” earlier this year.

What more propitious time for a “show about nothing” than the end of history?

Now, 30 years after the debut of “Seinfeld,” Netflix is betting big on the timeless appeal of the TV show that yada, yada, yada’d its way into America’s hearts, buying its exclusive streaming rights starting in 2021.

The enduring charms of “Seinfeld” in the streaming era, however, should not obscure the fact that the show is also very much a product of its time.

One aspect of the “Seinfeld” story that seems like a relic from a distant past is NBC’s initial concern that the show was “too New York, too Jewish” to be a hit, as the network’s entertainment president, Brandon Tartikoff (a New York Jew himself), memorably worried.

“Who will want to see Jews wandering around New York acting neurotic?” he asked.

Amid such shpilkes, the Jews behind “Seinfeld” masked the Jewishness of the show’s characters. True, the show’s four main characters seemed like over-the-top caricatures of Jewish New Yorkers (some were even based on real-life Jews, with George Costanza as a stand-in for series co-creator Larry David, and Cosmo Kramer inspired by David’s former neighbor Kenny Kramer). But aside from Jerry Seinfeld’s eponymous character, none of the main characters were identified by the show as Jews.

No matter how Jewish Elaine Benes (Julia Louis-Dreyfus) seemed, “Seinfeld” viewers learned that she was, in fact, a magnet for Jewish men due to her “shiksappeal.” Meanwhile, the fact that George, played very Jewishly by Jewish actor Jason Alexander, had an Italian last name was cause for considerable confusion, including for the Jewish actors (Jerry Stiller and Estelle Harris) who played his parents.

“It was never really clear if the Costanzas were Jewish or Italian or what they were,” Stiller later recounted. “Jason, Estelle and I were given the name Costanza, which sounds Italian, but there were episodes where I cooked Jewish food and ate knishes and kasha varnishkes in bed. When people asked me about this, I would simply say it was because we were a Jewish family in the Witness Protection Program.”

Amid the plenitude of Jewish-themed comedy on “Seinfeld” (public displays of affection during “Schindler’s List,” a desperate quest for a chocolate babka, the high anxiety of a bris, a dentist who converts to Judaism for the Jewish jokes, cavalier comparisons of soup purveyors and burger chefs to Nazis), the fact that the show’s characters could not be openly Jewish seemed like a joke itself.

Perhaps thanks in part to the success of “Seinfeld,” Jewish TV characters no longer need a witness protection program.

Now you can have an entire series about the mishegas of two young Jewesses wandering around New York, moaning about fasting on Yom Kippur and yearning to host a Passover seder (“Broad City”); a show whose protagonist engages her childhood archnemesis from Scarsdale in a “JAP rap battle,” replete with obscure-to-gentiles rhymes about Birthright Israel and the Jewish fraternity AEPi (“Crazy Ex-Girlfriend”); another show that spends a whole season on a family trip to Israel (“Transparent”); or a show where a character might crack wise about how wearing a yarmulke into a Palestinian chicken restaurant is akin to the raid on Entebbe (Larry David’s own “Curb Your Enthusiasm”). And that’s not even mentioning the Emmy-conquering “Marvelous Mrs. Maisel.”

“Seinfeld,” though, was a different animal than any of these. It was the top show on network television before cable and streaming fragmented the American TV-watching audience into countless niches.

Above all, “Seinfeld” is a product of a more innocent time. At the end of history, with America at peace, Jerry, George, Elaine and Kramer could run around preoccupied with minutiae like puffy shirts and close talkers, their audience relatively undistracted by more serious national and world dramas.

Now that history has resumed — with rising illiberalism, terrorism, wars — a classic “Seinfeld” laugh line like “Ukraine is weak!” seems more ominous. Indeed, the world now intrudes even upon “Seinfeld” itself, as with reports that the pied piper of right-wing populism Steve Bannon managed to profit from the show’s royalties.

“Seinfeld” was silly and carefree. By contrast, our new golden era of television has tortured anti-heroes for its most celebrated protagonists. True, the “Seinfeld” characters were themselves selfish miscreants, but they were so endearing that audience members tended to forget that they were kind of awful people. Even on “Curb Your Enthusiasm,” it is harder to overlook the David character’s bad qualities; it’s edgier comedy for edgier times.

Netflix is certainly right that “Seinfeld” is still funny. Like the original ratings-topping sitcom “I Love Lucy,” “Seinfeld” is comedy for the ages. If you stream it, people will watch and laugh.

But is it still “fresh”?

That’s not as clear. Don’t be surprised if the jaundiced eyes of 2021 view “Seinfeld” through a screen of nostalgia.

Not that there’s anything wrong with that.
The views and opinions expressed in this article are those of the author and do not necessarily reflect the views of JTA or its parent company, 70 Faces Media.