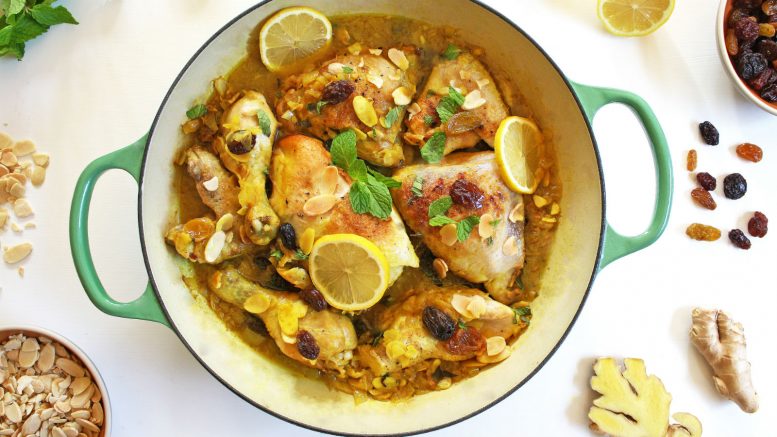 By Sonya Sanford
(The Nosher via JTA) — There is no substitute for eating a dish in its place of origin, preferably made in a home kitchen by hands that hold the muscle memory of thousands of meals. For me, a close second is stumbling across a recipe, trying it out, and feeling transported to a new place by its flavors. The vastness of the Jewish diaspora has gifted us with a wealth of interesting types of culinary mergers, and I particularly love exploring the Jewish food of India, where Jewish communities date back thousands of years.

There are three distinctive Jewish Indian groups that happened to be largely isolated from each other: the Cochin Jews of Kerala in South India, the Bene Israel Jews of India’s West Coast and Mumbai, and the Jews of Kolkata in East India (formerly known as Calcutta). In The Book of Jewish Food, Claudia Roden recounts how Shalom Cohen from Aleppo was the first known Jew to settle in Kolkata in 1798. Soon after, Syrian and Iraqi Jews followed and developed a strong community there, where they worked as merchants and traders and lived in harmony with their neighbors. Things changed in 1947 when India gained independence, and again in 1948 with the creation of the State of Israel; anti-Semitism grew as the Jews became associated with the colonial British power. During that time, most of the Jews from Kolkata immigrated to Israel, the U.S., England and Australia. This once vibrant Jewish Indian community is now all but gone from Kolkata.

While only a handful of Jews still live in Kolkata, the food from this community has traveled with its people. Their style of cooking involves a combination of ingredients and preparations from the Middle East, with the spices and techniques of Indian cuisine. There are several cookbooks and articles devoted to Sephardic foods and Indian Jewish cookery that have documented some of the dishes of the Jews from Kolkata.

I was first struck by a recipe I found in both Copeland Marks’ book, Sephardic Cooking, as well as in Indian Jewish Cooking, by Mavis Hyman. Mukmura (or Mahmoora) is a dish of chicken and almonds in a slightly sweetened tangy lemon sauce. I like any recipe that looks like it is simple to prepare but still offers big flavors, and this clearly fit that description. This chicken dish calls for easy-to-find and bold ingredients such as ginger, garlic, ground turmeric, lemon juice and fresh mint. The chicken is braised, which means the meat won’t get dry, and it can easily be made in advance for entertaining, Shabbat and holidays. By slowly simmering all of the ingredients together, you develop a slightly sweet and sour sauce with all those warm spices and aromatics. This dish is simultaneously comforting and exciting.
Ingredients:
4-5 lb. chicken, cut into 8-10 serving pieces
1 tsp kosher salt, or to taste
2-3 Tbsp oil
1 medium white or yellow onion, chopped fine (about 1½ cups)
2 large garlic cloves, minced fine
1 Tbsp freshly grated ginger
1½ tsp ground turmeric
1 cup water
¼ cup raisins, rinsed
¼ cup sliced or slivered unsalted almonds, without skin
¼ cup fresh lemon juice, about 2 lemons
1½ Tbsp agave syrup (nectar) or 2 tsp sugar
2 Tbsp chopped fresh mint, or to taste
lemon wedges, for garnish
Directions:

1. Cut the chicken into 8-10 pieces; reserve the backbone for chicken broth if desired. You can also find a pre-cut whole chicken, or you can use 4-5 lbs. of your preferred bone-in skin-on chicken parts.

2. Season the chicken pieces with a teaspoon of kosher salt.
3. On medium high heat, heat a large Dutch oven or deep skillet with a lid. Add a drizzle of oil to the pot and then brown the chicken pieces on each side, about 2-3 minutes per side or until golden brown. Brown the chicken in batches if needed so as not to overcrowd the pot. Remove the browned chicken and reserve.
4. Over medium heat, add the diced onions to the same pot so the browned bits that remain on the bottom can absorb some onion flavor. Add an additional drizzle of oil if there is not enough remaining chicken drippings. Sauté the onion until softened and beginning to turn golden but not browned, about 5-6 minutes.
5. Add the minced garlic, grated ginger, and turmeric to the onion mixture. Sauté for another 1-2 minutes, or until fragrant.
6. Add the reserved browned chicken back to the pot in a single layer. Pour the water over the chicken.
7. Bring the liquid up to a simmer and then lower the heat and cover the pot. Simmer for 20 minutes.
8. Add the raisins, almonds, lemon juice, and agave syrup to the pot. If your water has significantly reduced, add a little more water so there’s liquid in the pot. Cover the lid again and simmer an additional 15-20 minutes, or until the chicken is cooked through with an internal temperature of at least 165°F. Taste and season with more salt if necessary.
9. Transfer the chicken to a serving dish, pour the sauce over the chicken, and top everything with freshly chopped mint and a few lemon wedges. Serve with rice or your favorite side. Note: Chicken can be made a day in advance and reheats well.
(Sonya Sanford is a chef, food stylist, and writer based out of Los Angeles.)
The Nosher food blog offers a dazzling array of new and classic Jewish recipes and food news, from Europe to Yemen, from challah to shakshuka and beyond. Check it out at www.TheNosher.com.