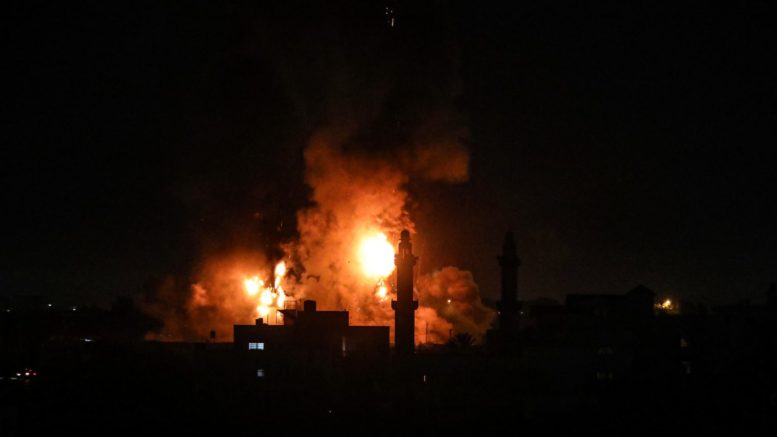 (JTA) — After balloons filled with incendiary material were sent from Gaza into the Israeli countryside, Israel’s military said it launched a fresh offensive of airstrikes on Hamas targets on Tuesday.

There were no casualties on either side, Reuters reported.

The flareup came days into a new Israeli government and hours after thousands of Israeli nationalists paraded through Jerusalem’s Old City in an annual event that Israeli authorities initially suspended this year in a bid to prevent violence. The government allowed a scaled-down version to take place Tuesday.

Hamas cited the original plans for the march when it fired rockets on Jerusalem last month, sparking an extensive conflict in which more than 230 Palestinians and 12 Israelis were killed.

On Tuesday, a Hamas spokesperson said the new balloons, which ignited fires in Israel, were an act of “brave resistance” to defend Palestinian “rights and sacred sites” in Jerusalem. (Some analysts suggested to Reuters that the balloons were not orchestrated by Hamas, the militant group that rules Gaza and the U.S. and Israel deem a terrorist group.)

Israel reportedly warned Egypt — which was a mediator in the recent Israel-Gaza fighting that killed about 230 Gazans and 12 Israelis — that continued acts of aggression would imperil the cease-fire agreed to on May 20.

The Israel Defense Forces said it is “ready for all scenarios, including renewed fighting in the face of continued terrorist acts emanating from Gaza,” according to Reuters. On Wednesday morning, the army tweeted that it had struck places where Hamas militants meet and wrote, “Hamas will bear the consequences for its actions.”

Israel’s new government led by a diverse coalition of parties is just days into its existence after ousting Benjamin Netanyahu, who had served as prime minister for 12 years. New Prime Minister Naftali Bennett has said that the coalition wants to avoid tackling difficult issues, such as the conflict with the Palestinians, in its early stages. Bennett argued in 2018 that Israel should respond aggressively to those launching incendiary balloons, who are often children, Ynet reported at the time.

Yair Lapid, a centrist who is serving as foreign minister for two years before he is slated to take over the prime minister role from Bennett, condemned the Israeli demonstrators in Jerusalem.

“It is incomprehensible that people can hold the Israeli flag in one hand and shout ‘Death to Arabs’ at the same time,” Lapid tweeted. “This isn’t Judaism or Israeliness, and it is definitely not what our flag symbolizes. These people are a disgrace to the nation of Israel.”

Be the first to comment on "Incendiary balloons from Gaza prompt new Israeli airstrikes, days into new government"